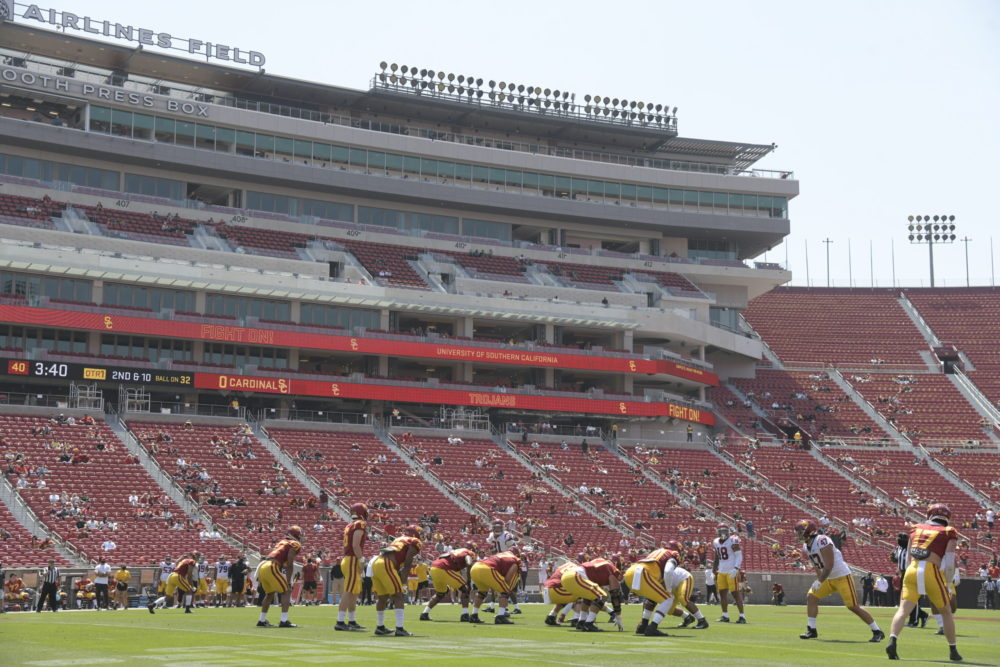 USC recruiting continues to ramp up to the much-anticipated June 1 date, when the dead period ends and unofficial and officials visits can take place. USC is expected to host dozens of top prospects in the 2022, 2023 and 2024 classes in June and over the summer. But before on-campus recruiting can resume, USC made a few moves over the past week, grabbing a transfer commitment, landing on several top schools lists and extending offers to some future standouts.

Big commitment from a big receiver

USC added another big receiver to its stable earlier this week, when former Texas Longhorn Malcolm Epps announced his commitment to the Trojans. Epps was listed as a tight end as a four-star prospect in the 2018 recruiting class but immediately began his career at wide receiver for Texas. He made the move inside to tight end last year but didn’t have nearly the same impact that he did as a redshirt freshman receiver in 2019. That ability to play a hybrid tight end/wide receiver is clearly something the USC offensive staff is looking for in players and prospects. The Trojans found plenty of success using 6-foot-5 Drake London as an inside receiver, but with him now getting more looks on the outside, the 6-foot-6, 250-pound Epps could provide that big body closer to the line of scrimmage that becomes a tough matchup for linebackers and safeties.

USC could have plenty of new faces among its receivers this fall. While Kyle Ford isn’t a new addition, hopefully getting him healthy for a full season will let him finally showcase all of his abilities. Transfer receiver K.D. Nixon and early enrollee freshman Michael Jackson III were able to show what he brings to the group this spring, USC landed a commitment from former Memphis wide receiver Tahj Washington, Epps now joins the crew and the Trojans will welcome hybrid receiver/tight end Michael Trigg and high school receivers Kyron Ware-Hudson and Joseph Manjack IV this summer.

It’s difficult to keep up with the number of top schools lists USC has appeared on over the past few months. It’s a long ways from making these top groups to actually landing the prospect, but there has been a clear and massive increase in the number of top prospects seriously considering USC in the 2021 and 2022 classes compared to previous years.

One of the recent ones is four-star offensive tackle Elijah Pritchett (Columbus, Ga./Carver), who listed USC among his top eight schools along with Alabama, Arkansas, Florida State, Georgia, Kentucky, LSU and Virginia Tech. The 6-foot-6, 280-pound tackle is the nation’s No. 128 overall prospect and No. 13 offensive tackle. Alabama looks like it could be very difficult to beat in this race, but Pritchett is another Georgia big man USC is hoping to get on campus. Georgia is doing very well in state in this class. The Bulldogs already have commitments from six of the top 15 prospects, including Nos. 3, 4, 5 and 6, and it wouldn’t be a huge shock if Georgia eventually landed 11 of the top 15. But USC is working several prospects there and will get official visits from defensive tackle Mykel Williams (Columbus, Ga./Hardaway), the state’s No. 2 player, wide receiver and No. 10 prospect Kojo Antwi (Suwanee, Ga./Lambert), offensive guard and No. 12 prospect Addison Nichols (Norcross, Ga./Greater Atlanta Christian School), defensive tackle and No. 13 prospect Christen Miller (Ellenwood, Ga./Cedar Grove) and offensive tackle and No. 24 prospect Dayne Shore (Alpharetta, Ga./King’s Ridge Christian School).

Burrell’s top 10 also included Arizona State, Boise State, Cal, Colorado, Miami, Michigan, Oregon, Washington and Washington State. He’s been tied to Washington, but Cal also seems to be making a move. He’s an interesting prospect with some positional versatility along the defensive line. He bulked up in a big way over the past year and played defensive end at 275 pounds. He’s likely and inside lineman at the next level, but he does have enough speed and pass rushing moves to play outside as well.

Green’s top five includes Cal, Stanford, USC, Utah and Washington State. It’s interesting that Oregon is not included as his brother is Ducks cornerback Mykael Wright. Oregon landed a few major receiver targets in the 2021 class and is chasing some top prospects in 2022 as well. USC likewise added some receiver talent in the 2021 class and through the transfer portal and has its sights set on a handful of four and five-star prospects in the 2022 class. Green’s 5-foot-11, 165-pound frame isn’t overly impressive, but he brings speed and run-after-catch ability. He has a USC official visit scheduled for June.

With cornerbacks coach Donte Williams and safeties coach Craig Naivar leading the way, USC has been active in offering defensive backs in the 2023 and 2024 classes and not being afraid to get in early on them.

On Tuesday, USC offered 2023 cornerback Dale Miller (Hoover, Ala./Hoover), a 6-foot, 170-pound cornerback. Miller went into a Rivals camp in late April only holding an offer from UAB. After a standout performance, he now has offers from Arizona State, Arkansas, Boston College and USC.

Washington is home to several of the top 2022 offensive line prospects and it’ll be home to at least one standout in 2024 as well, in 6-foot-5, 330-pound offensive guard Isendre Ahfua. USC became his third scholarship offer on Tuesday, joining earlier ones from Nevada and Utah.

USC, like every program, is going to be busy recruiting players out of the transfer portal. The Trojans already have six commitments from there this offseason — four early enrollees plus Washington and Epps — and likely aren’t done if the right prospect pops up.

One of those could be Auburn safety Chris Thompson, who entered his name into the portal this week and is a prospect potentially worth keeping an eye on. He was the No. 199 overall prospect in the 2020 class out of Duncanville and was recruited to Texas by USC safeties coach Craig Naivar, but surprised many when he announced his commitment to Auburn.

Thompson also looked hard at USC, taking an official visit to Los Angeles in June of 2020 along with a big Texas contingent.

Naivar might have a second shot at Thompson now. USC brought in four new bodies at the safety position this spring and will add another this summer in nickelback Jaylin Smith. But Naivar said this spring that they still don’t have enough bodies at the three safety positions to do everything they want to do defensively, so getting another out of the portal — USC already has former Texas safety Xavion Alford on the roster — could be on the to-do list over the next few months.