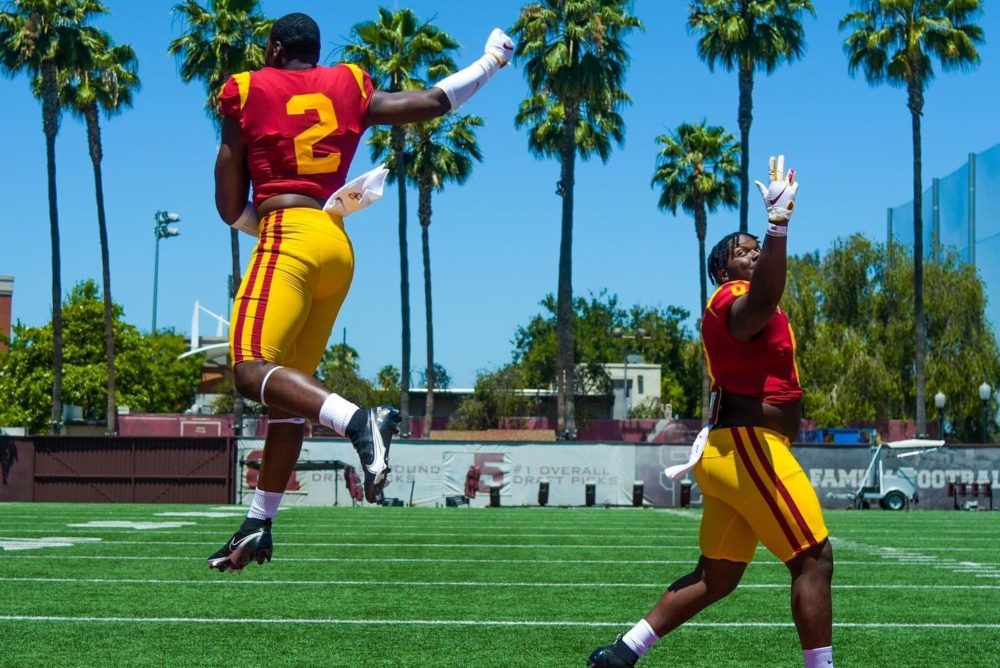 USC hosted its second big recruiting weekend of the summer over the past few days and there were several prospects in town who could be legitimate options to wind up as part of the Trojans’ 2022 recruiting class.

USC and defensive line coach Vic So’oto have several defensive line targets in their sights, but they’ve done really well to target Williams and Miller early and stay on them consistently. The two had been looking forward to taking this USC official visit together and it was clear from the moment Miller arrived that his larger-than-life personality would be a great fit with Los Angeles and USC.

USC made sure to show Miller and Williams the statue of the famed Wild Bunch defensive line. The USC coaches are selling the Trojan Family, the opportunity Los Angeles presents with upcoming Name, Image, Likeness rules, and the football tradition at USC. All together, this visit likely left both defensive linemen with something to think about as they proceed through the rest of their recruitment.

The difficult part about keeping these two interested is that schools closer to home might have the opportunity to take a few swings at them, getting them on official visits and unofficial visits. A return trip to USC this fall could only come as an unofficial visit, but it would definitely signal significant interest in the Trojans.

USC also hosted running back De’Anthony Gatson (Newton, Tex./Newton) on an official visit. The running back position is a very interesting one in this recruiting class. It’s likely the Trojans will need to take two high school backs in 2022, but the transfer portal has made all high school recruiting a lot more fluid. USC lost Stephen Carr and Markese Stepp to the portal this offseason, but was able to land Texas transfer Keaontay Ingram, who looks like a potential star.

The 5-foot-10, 198-pound Gatson has been top target for USC since the Trojans offered in March and things are looking very good for the Trojans right now, due to the fact that Gatson announced on the heels of this trip that he will be making his commitment on June 22. Gatson took an official visit to Texas the previous weekend and has an official scheduled for Colorado next weekend, but it typically means plenty when a prospect sets a commitment date right on the back of an official visit.

Gatson has been an extremely productive back over the last two seasons, rushing for 1,862 yards and 30 touchdowns in 2019 as a sophomore, then totaling 1,974 yards and 29 touchdowns on the ground this past fall as a junior.

And he might not be the only Newton running back set to make USC his future home. The Trojans are also in the mix for TCU transfer running back Darwin Barlow, who prepped at Newton and was a three-star back in the 2019 recruiting class who took a late official visit to USC in that cycle. Barlow contributed 428 rushing yards and four touchdowns in 10 games last season. He faced a similar situation as Ingram at Texas, with the arrival of a five-star 2020 running back who ultimately settled in as the starter and looks like the future at the position. For Ingram at Texas, it was Bijan Robinson. For Barlow at TCU, it was Zach Evans. They were the top two running backs in the entire 2020 recruiting class.

Barlow said he will announce his commitment Monday evening, and the Trojans could add another back to the roster who will be able to help immediately in the running and passing games.

USC also hosted an intriguing wide receiver in four-star Darrius Clemons (Portland, Ore./Westview). He’s way more than intriguing as a player and prospect, standing 6-foot-3 and 205 pounds with everything you’d want in a receiver in terms of speed, route running and the ability to go get the ball wherever it’s thrown. But he’s intriguing in his connection to USC. He has a number of SEC offers and took an official visit to Auburn last week. He’s originally from the Midwest, so Big Ten schools could have an advantage and Penn State has been seen as a leader (he’ll take an official there later this month). He’s also now in Oregon, so the Ducks have made him a priority and they certainly won’t let him leave the state without putting up a fight. Still, there’s a feeling that USC is doing well with Clemons and he could be a legitimate option. Like the running back position, wide receiver will be a spot that could pivot as the recruiting period moves along. The Trojans have some out-of-state players they are targeting, but Tetairoa McMillan (Anaheim, Calif./Servite) and C.J. Williams (Santa Ana, Calif./Mater Dei) are major targets.

As for defensive backs, USC hosted four-star prospect Earl Little Jr. (Ft. Lauderdale, Fla./American Heritage). It’s going to be very difficult to pull him out of the Southeast, as Alabama leads the way and Florida, Florida State and LSU are all heavily involved (those four schools will get official visits this fall). But USC cornerbacks coach Donte Williams has never met a talented cornerback he doesn’t think he can recruit and sign, and getting Little on campus this weekend is big in that it keeps the Trojans in the conversation with him and it also means that Little, a well-known and top-100 prospect in this 2022 class, will have some positive thoughts about USC to share with prospects back in Florida.

USC has done well to bring in top 2023 targets while also hosting so many 2022 official visits. On Monday, the Trojans will have one of the most important unofficial visits of the summer, with four-star 2023 quarterback Nico Iamaleava (Downey, Calif./Warren) one of several underclassmen scheduled to be on campus.

Iamaleava recently completed a trip to Alabama, Clemson, Georgia and Ohio State that definitely had an impact on him and netted him Alabama and Ohio State offers. With five-star 2023 quarterback Malachi Nelson (Los Alamitos, Calif./Los Alamitos) trending toward Oklahoma and about a month away from his commitment date, the Trojans have been in pursuit of Iamaleava. That competition got a lot tougher with Alabama and Ohio State joining the race, especially with former Southern California prep standout Bryce Young helping to lead the recruiting charge for the Crimson Tide during the visit.

The red carpet will definitely be rolled out on Monday for Iamaleava, who could be visiting along with 2023 athlete Matayo Uiagalelei (Bellflower, Calif./St. John Bosco).

The Iamaleava/Nelson pairing feels very similar to the Young/D.J. Uiagalelei duo in the 2020 recruiting class. USC needed to sign a quarterback in that class and held a commitment from Young for a long time. But he ultimately was pulled away by Alabama and USC wound up not signing a quarterback in that class. In 2023, there are (for now, at least) two clear-cut top guys in the Los Angeles area in Nelson and Iamaleava and the Trojans definitely need to land one of them.