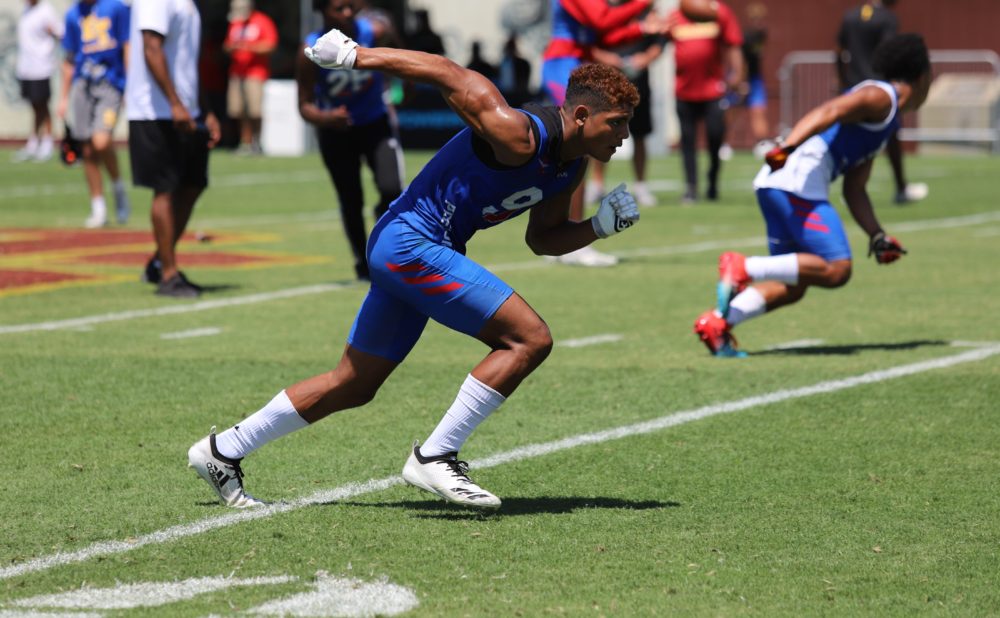 June has the potential to be by far the most important month of the 2022 recruiting cycle. For the first time in 14 months, prospect will have an opportunity to take traditional official or unofficial visits to USC, and every other campus across the country. There have been some visits taken by prospects over the past year, but none have been under the guidance of coaching staffs or recruiting departments and none have resembled the typical visit experience.

On Tuesday, June 1, the floodgates will open and visits will again be permitted. USC is scheduled to host a number of prospects on unofficial visits that day, including a couple of local 2023 defensive back prospects in Mission Hills (Calif.) Alemany teammates R.J. Jones and Jshawn Frausto-Ramos. It would not be surprising to see USC try to capitalize on the Steve Clarkson Quarterback Retreat, which took place over the weekend in Los Angeles and featured just about every top quarterback in the 2022, 2023, 2024 and even 2025 classes, along with a number of very talented wide receivers and defensive backs. If those players were able to stay an extra day or two in the area, there’s a good chance USC was working to get them on campus.

This is a time the staff has been building for and USC is ready to capitalize. This offseason, the Trojans brought in Bryan Carrington as a quality control analyst and Jeff Martin as Director of Scouting. Both are regarded as top recruiters in the country, regardless of position. USC also hired Megan Mueller as Director of Recruiting Operations, in charge of helping to lead the Trojans’ on-campus recruiting efforts. Her presence has already paid off in helping USC forge a connection with four-star defensive end D.J. Wesolak (Boonville, Mo./Boonville).

The coaches need to make sure they’re ready to go right away, because Wednesday brings an important visitor in the form of four-star wide receiver C.J. Williams (Santa Ana, Calif./Mater Dei), who doesn’t plan to take an official visit to USC, so this unofficial visit could be pivotal. Williams is another in a line of standout Mater Dei receivers USC is hoping to land, following Amon-Ra St. Brown, Bru McCoy and Kyron Ware-Hudson just in recent years. USC is chasing a lot of receivers in this 2022 class, but it would be tremendous to start right at home with two local standouts in Williams and four-star Tetairoa McMillan (Anaheim, Calif./Servite). There’s nothing wrong with the way Williams performs at camps or in practice scenarios, but he’s the type of player who can take it up to another level during games, and that’s the sign of a guy who can have real success at the next level.

Where things will get more interesting for USC is this coming weekend, when the Trojans will host their first official visit weekend of the 2022 cycle.

There are some huge visitors scheduled for that weekend, including five-star, No. 8 overall prospect and No. 1 interior offensive lineman Devon Campbell (Arlington, Tex./Bowie). Texas is going to be very difficult to beat for Campbell, a 6-foot-3, 310-pound guard, but USC has stayed consistent in this recruitment as a team he consistently mentions. Getting his first visit is a good sign for the Trojans, though maintaining the momentum created by the visit will be a difficult challenge for the USC coaches when it comes to Campbell, as well as every out-of-state prospect visiting over the coming month or two.

USC is also set to host four-star running back Gavin Sawchuk (Littleton, Colo./Valor Christian), the No. 2 running back and No. 42 overall prospect in the country. Sawchuk can do absolutely everything at the running back position and bring elite speed and elusiveness into the backfield. Sawchuk took a self-guided visit to USC during the dead period, so getting him back on campus is big. The Trojans again will have their work cut out of them in this pursuit, with Notre Dame, Ohio State and especially Oklahoma very much involved.

Four-star cornerback Jaeden Gould (Oradell, NJ/Bergen Catholic) is a prospect who has long mentioned USC as one of his leaders. It looked like Michigan could be the main challenger, but recently Penn State has been seen as the potential landing spot. Still, USC will bring him in with the Trojans looking to build an absolutely loaded secondary in this class. USC already holds commitments from five-star cornerback Domani Jackson (Santa Ana, Calif./Mater Dei) and four-star corner Fabian Ross (Las Vegas/Bishop Gorman). Holding onto Jackson as Alabama looks to make a big-time run at hime is priority No. 1 for the entire recruiting class, but landing another corner or two to go with that group (and add to a terrific 2021 pair in Ceyair Wright and Prophet Brown) would be a big deal for this class. Returning cornerback Chris Steele has his sights set on a big season and leaving for the 2022 NFL Draft, and there really is no established depth behind whoever the two starters wind up being this fall.

And speaking of no established depth, USC will host a second offensive lineman this coming weekend in three-star tackle Austin Kawecki (Frisco, Tex./Lebanon Trail). The 6-foot-4, 265-pound Kawecki put together a string of offers in late March, of which USC was one. Kawecki is one of a number of Texas prospects the Trojans are pursuing and one of several offensive linemen as well. He’ll have a couple of options closer to home, including Baylor and Oklahoma State, so this is another prospect where a strong impression from an early official visit will need to last.

USC landed three wide receivers in the 2021 class and brought in another two in transfers K.D. Nixon and Tahj Washington, but that position will again be important in the 2022 class. Drake London has the potential to leave early for the NFL following this season and this will be Nixon’s only season at USC. Both four-star Shazz Preston (Saint James, La./Saint James) and four-star D.J. Allen (Gladewater, Tex./Gladewater) are scheduled to be at USC this weekend. Preston is a connection via Martin who will be a difficult pull out of the Southeast. Alabama, Georgia and Texas are chasing him, and LSU will likely be a major player. Allen is a big-time athlete who brings plenty of speed to the position.

Speed was a theme in the offers USC sent over the past week as well.

Class of 2023 cornerback Rodrick Pleasant (Gardena, Calif./Serra) picked up an offer from USC, in addition to offers from Boise State, BYU, Cal, Oregon, Penn State, TCU, Utah and others last week. The 5-foot-11, 180-pound corner joins a number of other local prospects with USC offers in the 2023 class, meaning there should be plenty of options for the Trojans to chase here in Southern California over the next year. The offers to Pleasant came following a 10.57 mark in the 100m in his first sophomore meet. Pleasant followed that up later with a 21.36 in the 200m.

USC also went back to Corner Canyon with a couple of offers, looking into the same program that helped produce 2021 quarterback signee Jaxson Dart. The first went to wide receiver Cody Hagan, a three-star prospect who checks in at 6-foot-1, 175 pounds and has clocked a 10.51 in the 100m and a 21.10 in t he 200m. Oregon quickly followed USC with an offer to Hagan.

Linebacker Harrison Taggart hit the same double, with offers from Oregon and USC, as well. The three-star linebacker went 10.70 in the 100m in the same race Hagan had his 10.51 and 2023 wide receiver target Zachariah Branch (Las Vegas/Bishop Gorman) went 10.33. The 6-foot-2, 200-pound Taggart already held plenty of Pac-12 offers, including Arizona, Cal, UCLA and Utah.

USC is hoping to make Las Vegas an extension of Southern California when it comes to keeping “local” prospects home, and the Trojans offered 2023 cornerback Justyn Rhett (Las Vegas/Bishop Gorman). The 6-foot-1, 190-pound corner has the size that USC targets for the position and plenty of other schools have taken note. Florida State, Georgia, Michigan, Oregon, Tennessee and other have previously offered.

The Trojans continue looking for options at the running back position in this class. Grabbing highly-ranked Jovantae Barnes (Las Vegas/Desert Pines), Oklahoma commit Raleek Brown (Santa Ana, Calif./Mater Dei) or Sawchuk would be the top priority at the position, but grabbing two high school prospects in the 2022 class appears to be the plan for USC. The latest offer went out to four-star back Ollie Gordon (Euless, Tex./Trinity), the nation’s No. 286 prospect and and 6-foot-1, 210-pound back who committed to Oklahoma State in early February.