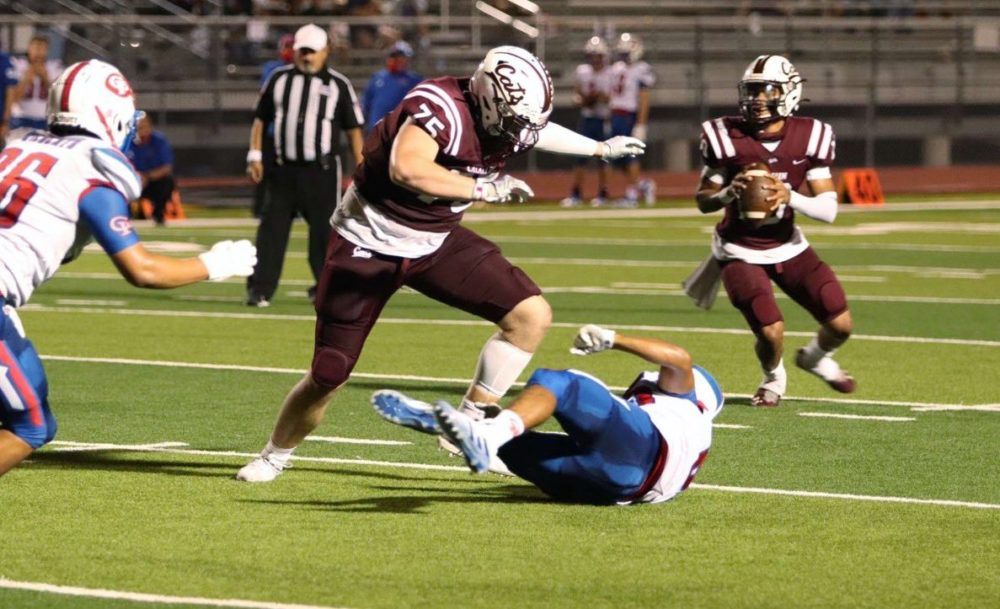 California high school players are still waiting for their seasons to start, but several USC commits and targets turned in impressive performances late last week. We run down some of the notable outings, as well as the latest recruiting notes.

Dallas Skyline fell behind 25-6 on the first play of the second half, but USC wide receiver commit Quay Davis went to work shortly afterward. Davis caught touchdown passes of 11, 34 and 35 yards to help his team to a 34-32 win. Davis finished the game with six receptions for 122 yards and the three touchdowns.

Here are the highlights, including the athletic leaping touchdown grab from Davis (No. 2).

Trigg helps in a win

It wasn’t a huge game for USC tight end commit Michael Trigg, but he finished with three receptions for 56 yards in a blowout 59-18 win that helped move his Tampa (Fla.) Carrollwood Day team to 4-2 this season.

Trigg now has 29 receptions for 581 yards and five touchdowns this season, averaging 20 yards per reception.

USC cornerback commit Philip Riley wasn’t needed much on defense, as his Bloomingdale team ran up a decisive 43-6 win. But he did contribute on special teams, as he fielded a punt and raced 50 yards for a touchdown to help keep his team undefeated this season.

Buchanan’s blocks lead to another win

Corpus Christi (Tex.) Calallen ran its winning streak to four games over the weekend, as USC offensive tackle commit Ty Buchanan helped his team erase a 20-0 deficit on the way to a 34-27 win.

Unable to get things going early, the Wildcats eventually rushed for 379 yards and five touchdowns.

Buchanan also got involved on defense, as he recorded two tackles.

Josh Moore has made his name as a high school safety, but he’ll head to USC to play wide receiver. That won’t stop him from continuing to make big plays on defense for the remainder of his high school career.

In a 30-0 win, Moore showed why Stanford coveted him as a safety prospect, as he helped lead a big time defensive effort. In fact, the War Eagles have been incredible on defense all season, as they’ve allowed just three total points through four games.

Darting up the recruiting rankings

New USC quarterback target Jaxson Dart (Draper, Utah/Corner Canyon) received a massive bump in his recruiting ranking, as ESPN moved him from a three-star prospect all the way up to the nation’s No. 73 overall recruit. That makes Dart a four-star prospect in the recruiting composite and one of the nation’s biggest risers during his senior season.

It’s no wonder, as Dart is a phenomenal athlete–a two-sport standout in baseball as well–and just led his team to a 10-0 regular season.

Dart completed 68% of his passes for 3,345 yards and posted a ridiculous 48-to-2 touchdown-to-interception ratio.

He put the finishing touches on the regular season last week by throwing for 382 yards and six touchdowns, and posting his fifth 100-yard rushing game of the season.

Dart threw for fewer than four touchdowns in a game just once this year (three in the season opener) and never posted fewer than 300 yards passing and rushing combined.

USC has an interesting situation at quarterback, as both Miller Moss (Mission Hills, Calif./Alemany) and Jake Garcia (Valdosta, Ga./Valdosta) are committed, but Dart has clearly done enough for the Trojans to at least take a look.

An early offer in Texas

USC coaches have shown they are comfortable offering prospects as freshmen and sophomores. This staff has also shown a willingness to go into Texas for any number of recruits. So it wasn’t surprising to see USC become the first FBS offer for 2023 safety Arian Parish (Katy, Tex./Katy) last week.

USC is plenty familiar with Katy, as it has a commitment from 2021 running back Brandon Campbell, who was set to play his senior season there before announcing he would opt out of this fall season.

Standing 5-foot-11 and 170 pounds, Parish is already an impressive-looking prospect and brings an aggressive, physical nature to the safety position.