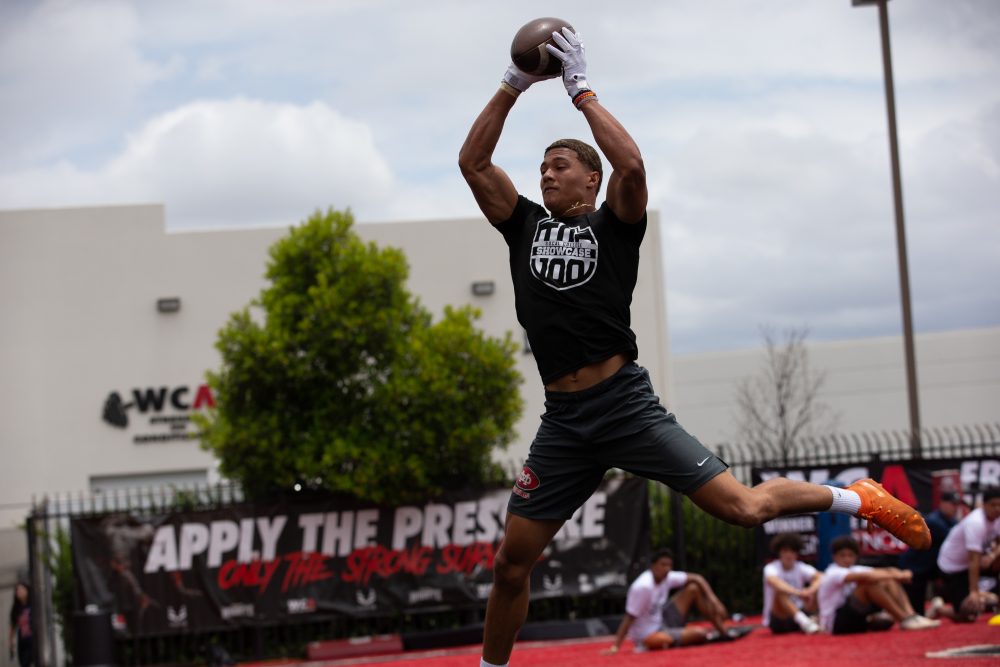 USC suffered a decommitment over the weekend, but that was quickly overshadowed by a massive commitment from a local five-star prospect. Elsewhere, another flurry of offers went out in the 2022 and 2023 classes, a talented target announced a commitment date, USC remains active in the transfer portal and the Trojans are in a battle with Ohio State for a top target in this 2021 class.

Following the commitment of five-star cornerback Domani Jackson (Santa Ana, Calif./Mater Dei), it’s difficult to overstate two things. The first is just how important getting this commitment at this time is from Jackson. Clemson, Michigan and Ohio State were involved and every program in the country would have welcomed a commitment from him. Yes, he’s a local prospect and USC should always have a huge advantage with those guys. But that hasn’t been a guarantee of late, so getting a local player of this caliber is huge.

The timing also makes it important. Yes, there is still a long ways to go before Jackson can officially sign and other programs are not going to stop recruiting him. But this is also time that Jackson can recruit for USC — and he will be an excellent recruiter — which five-star recruits who wait until much closer to signing day can’t do for their chosen programs.

Landing Korey Foreman very late in the 2021 recruiting cycle provided a thrilling and absolutely necessary conclusion to that class. With Jackson in the fold this early, he can help write the entire story of the 2022 class.

The second point that can’t be overstated is just how impactful cornerbacks coach Donte Williams has been on the recruiting trail. There is a saying that some schools recruit themselves, but it’s far more accurate to say that some schools introduce themselves. A recruit is far more likely to take a call or a meeting with someone sporting a USC logo over someone from Arizona, or Syracuse, or Mississippi State, or dozens of other programs. But that doesn’t sell the program.

During his time working for West Coast programs, there was always a question about what Williams could do on the recruiting trail if given the power of the USC brand to back him. We’re finding out, as Williams has been instrumental in landing both Foreman and Jackson (the No. 1 players in the state for the 2021 and 2022 classes) and has helped lock down defensive back recruiting in the state. What’s amazing is that Williams never seems to slow down and he’s one of the people most responsible for the feeling among California’s elite prospects that USC can provide what they’re looking for in a school, rather than needing to out of the state or out of the conference

It was overshadowed quickly by the Jackson commitment news, but USC did lose a commitment from four-star linebacker Niuafe Tuihalamaka (Mission Hills, Calif./Alemany) on Saturday. This is a tough one because Tuihalamaka is a terrific football player and seems as though he’d fit really well into USC defensive coordinator Todd Orlando’s scheme. The 6-foot-1, 240-pounder could turn into a dominant inside linebacker with the physical ability and mentality.

A recent Notre Dame offer seemed to be the backbreaker in terms of him sticking with his USC commitment. Now, he’ll be able to approach the rest of the recruiting process as an uncommitted prospect. Notre Dame, Stanford and Oregon are a few of the schools to watch here, but USC is likely to continue the chase and hopefully the Trojans can reel back in the nation’s No. 63 overall prospect.

While it feels like 100% of the recruiting attention has shifted to the 2022 class, there is still the very important matter of finishing up the 2021 recruiting class for many programs. USC is one of those, as even with having No. 1 overall player Korey Foreman officially in the fold, there is still the matter of officially signing cornerback commit Ceyair Wright (Los Angeles/Loyola) and landing uncommitted four-star linebacker Raesjon Davis (Santa Ana, Calif./Mater Dei).

Davis committed to LSU a little more than a year ago but opened back up in recent weeks and is now looking hard at both Ohio State and USC. The Trojans should probably feel good about where they stand with Davis at this point, but the Buckeyes aren’t going down without a fight and Ohio State is not used to losing many recruiting battles right now. Over the weekend, Davis and family were able to take a trip to Columbus to check out Ohio State despite the recruiting dead period remaining in place.

The only question remains is whether Ohio State can generate enough momentum to land Davis when he makes his decision on Signing Day (February 3). He’s the top target left for USC in this class, and the Trojans have been on a recruiting tear recently, landing some massive names that will undoubtedly have at least some kind of effect on Davis’ decision.

The Trojans have lost several players to the transfer portal of the last year, but USC brought in its third transfer of the offseason over the weekend, as former Colorado wide receiver K.D. Nixon is headed to USC.

There is a lot of talent in the USC wide receiver room, but the Trojans have lost so much experience over the last two seasons, with Michael Pittman, Amon-Ra St. Brown and Tyler Vaughns all departing. Nixon has plenty of experience as a four-year player, but more importantly for USC, he bring an element of speed that is a bit lacking in the USC offense right now. Among returning wide receivers, Gary Bryant Jr. is the only one who is a true speed threat, so Nixon should be able to find a role in the offense and potentially as a returner.

USC is hoping it isn’t finished making transfer portal moves, as former Tennessee linebacker Henry To’o To’o is a top target for the Trojans. Alabama, Georgia and Michigan are also heavily involved, and it will be interesting to see whether staying in the SEC or returning to his home state of California eventually wins out.

Inside linebacker is a position in flux for the Trojans right now. USC lost Palaie Gaotaote to the transfer portal during the season and both Jordan Iosefa and Solomon Tuliaupupu are absolute unknowns due to their injury history. Tayler Katoa is in a similar situation as he returned from a mission and although head coach Clay Helton thought he would be able to potentially contribute at some point, Katoa did not see time in any game last fall. Having those three fully healthy would provide a huge boost to the position, but To’o To’o is a proven commodity at this level who could immediately become the heart of any defense he joins.

USC makes a flurry of offers

USC has been busy making offers over the past week, as the Trojans have shown they won’t hesitate to try jumping into the picture with national prospects.

USC was in on a run of offers for three-star 2022 linebacker Kip Lewis (Carthage, Tex./Carthage), as the 6-foot-2, 200-pound outside linebacker added offers from USC, Oklahoma, LSU, Texas, Baylor and Texas A&M this past week.

With Todd Orlando, Craig Naivar, Mike Jinks, Graham Harrell and incoming offensive line coach Clay McGuire all on the staff, there is no expectation that the number of USC offers in the state of Texas will decline in the near future.

USC also went into the Southeast looking for defensive linemen. The Trojans offered 2022 defensive end J’mond Tapp (Donaldsonville, La./Ascension Catholic), a 6-foot-3, 230-pound defender who checks in as the nation’s No. 135 overall prospect. USC offered the Louisiana native on the same day LSU did, and Tapp also holds an offer from Georgia.

Fellow standout 2022 defensive lineman Caden Curry (Greenwood, Ind./Center Grove) also picked up a USC offer this past week. The 6-foot-5, 250-pound defensive tackle is going to be a top Ohio State target, and it could be difficult to get him out of the Midwest.

USC also offered a few 2023 prospects, in wide receiver Hykeem Williams (Ft. Lauderdale, Fla./Stranahan), and cornerbacks Tony Mitchell (Alabaster, Ala./Thompson) and Ethan Nation (Roswell, Ga./Roswell). Mitchell is the No. 1 cornerback in the 2023 class and obviously someone who will be difficult to pull away from the hometown Crimson Tide. But USC cornerbacks coach Donte Williams just landed a commitment from the No. 1 cornerback in the 2022 class and is showing his desire to simply stack recruiting classes on top of each other, constantly trying to out-recruit what already exists on the roster.

One of the top defensive tackles in the nation will announce his decision fairly soon, as four-star defender Mykel Williams (Columbus, Ga./Hardaway) said he plans to commit on March 15.

USC defensive line coach Vic So’oto has USC in the mix for Williams, though getting him away from the in-state Georgia Bulldogs and out of the Southeast won’t be easy. The 6-foot-5, 255-pound defensive tackle released a top-10 earlier this month that featured Alabama, Arizona State, Clemson, Georgia, Georgia Tech, Kentucky, LSU, Ohio State, Penn State and USC.

There is still a long way to go for 2023 defensive end Derrick LeBlanc (Kissimmee, Fla./Osceola), but the 6-foot-5, 240-pound defensive end released a top-10 list recently and USC made the cut.

The Trojans are listed amongst a group of recruiting elite, as LeBlanc will likely ultimately have his choice of whatever program he wants when the time comes.