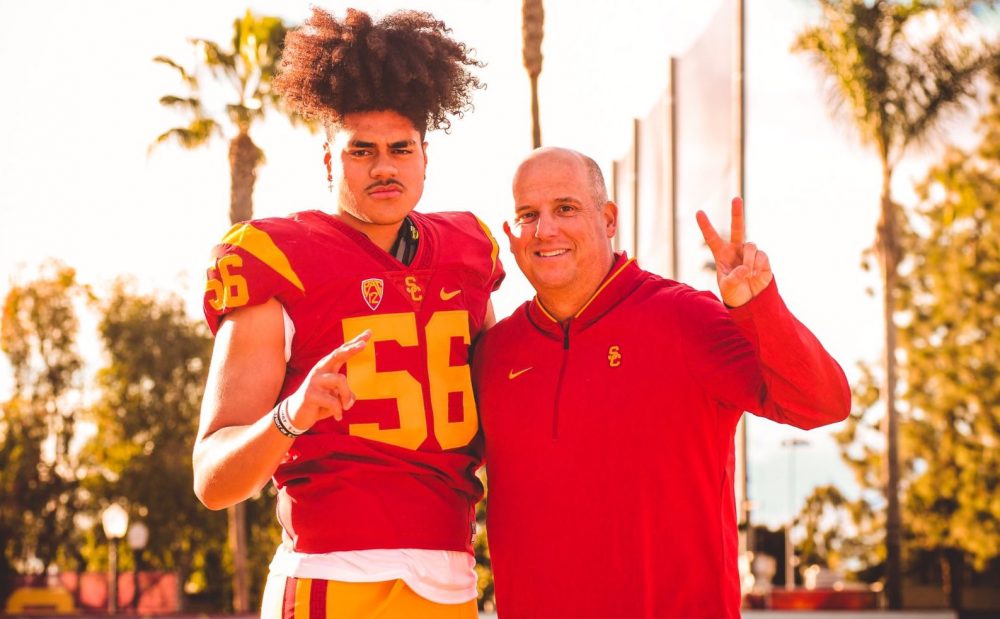 Another week brought another commitment for the Trojans, as USC coaches stayed busy on the recruiting trail while handing out a flurry of offers, and the Trojans landed on the top lists of three potential impact prospects.

Mapakaitolo isn’t as physical developed yet as some of the top tackle prospects in the country, but he has a terrific frame for the position and plays with a violent streak on the field. He’s the third offensive lineman to commit to USC in this class, joining tackle Mason Murphy (San Juan Capistrano, Calif./JSerra) and tackle/guard Maximus Gibbs (Bellflower, Calif./St. John Bosco)

The Trojans remained in the hunt for top targets at wide receiver, tight end and linebacker this week, as three prospects narrowed down their final lists.

Elite wide receiver Dont’e Thornton (Baltimore/Mt. St. Joseph) is down to six schools, with options from coast to coast. Arizona State, Florida State, Notre Dame, Oregon, USC and Virginia made the list for the 6-foot-4, 185-pound receiver and nation’s No. 47 overall prospect.

Thornton originally committed to Penn State but backed away from that and now does not include the Nittany Lions among his finalists. Things are going to get interesting on the recruiting trail between Arizona State, Oregon and USC, as those three coaches staffs are aggressively going after a lot of the same prospects. Thornton is one of those, and he has a terrific relationship with the Duck coaches.

Tight end is a spot where USC has signed three really talented prospects over the past two classes but the depth is set to take a major hit following this season, as Daniel Imatorbhebhe, Josh Falo and Erik Krommenhoek will all depart.

The 6-foot-5, 230-pound, four-star prospect is a dynamic pass catcher as a tight end and would have the ability to split out wide in the USC offense. This is a national recruitment, but if Ferguson decides to stay out West, this could be another tough Oregon-USC battle.

On the other side of the ball, USC remains in the mix for four-star athlete Will Latu (Spanaway, Wash./Bethel). The 6-foot-2, 220-pound athlete announced that he is down to Michigan, USC, Utah and Washington. There are some similarities to Simon, as Latu also is from Washington and his first offer was from USC. He’s also someone who plays multiple position in high school as an outstanding athlete but likely projects to linebacker at the next level. He’s the No. 273 overall prospect and No. 15 athlete.

USC coaches have handed out plenty of offers over the past week, as they continue looking to make a mark in the 2022 and 2023 classes. But there was an intriguing offer this past weekend, as four-star cornerback Damarius McGhee (Pensacola, Fla./Pensacola Catholic) joined the list of USC cornerback targets.

McGhee recently made an absolutely massive rise in the 247Sports rankings, jumping from a three-star prospect all the way up to the nation’s No. 89 overall recruit and No. 9 cornerback. The 6-foot-1, 162-pound defensive back announced a top-12 schools list just before the USC offer came in, but he said he is still open to other programs.

McGhee is a big-time athlete who does a little bit of everything for his high school team, including playing some quarterback.

This offer comes around the time four-star cornerback target Denzel Burke (Scottsdale, Ariz./Saguaro) announced his commitment to Ohio State. Burke has recently included the Trojans among his finalists.

USC has several cornerback targets the coaches are pursuing, including Nathaniel Wiggins (Atlanta/Westlake), Ceyair Wright (Los Angeles/Loyola), Jaylin Smith (Mission Hills, Calif./Alemany) and Jaylin Davies (Santa Ana, Calif./Mater Dei). It’s the one position on defense that doesn’t yet have a commitment, and with cornerbacks coach Donte Williams leading the charge, it’s one of the most interesting positions to watch in this class.

Greene holds some major offers, as the 6-foot-3, 180-pound receiver has been offered by Auburn, Georgia, LSU, Michigan, Oklahoma, Oregon, Penn State and many others.

Anderson has been on an absolute recruiting tear lately. Since announcing the USC offer this past Thursday, the 5-foot-10, 187-pounder has also announced offers from Arkansas, Georgia, Kentucky, Michigan State, Purdue and Virginia.

USC coaches haven’t been shy about extending offers into the 2023 class, looking to start relationships with prospects heading into their sophomore seasons. One such prospect who added an offer from the Trojans is offensive tackle TJ Shanahan (Orlando, Fla./Timber Creek).The 6-foot-5, 300-pound Shanahan is on track to be one of the top offensive tackles in his class and programs are already lining up.

He’s already been offered by Florida, Florida State, LSU, Miami, Oregon and others. There is some Pac-12 familiarity with Shanahan, as his father, Tim Shanahan, played center at Arizona.

Previously, we looked at the offers USC coaches had extended early last week. Here’s a quick rundown of those additional prospects who added offers over roughly the past week.