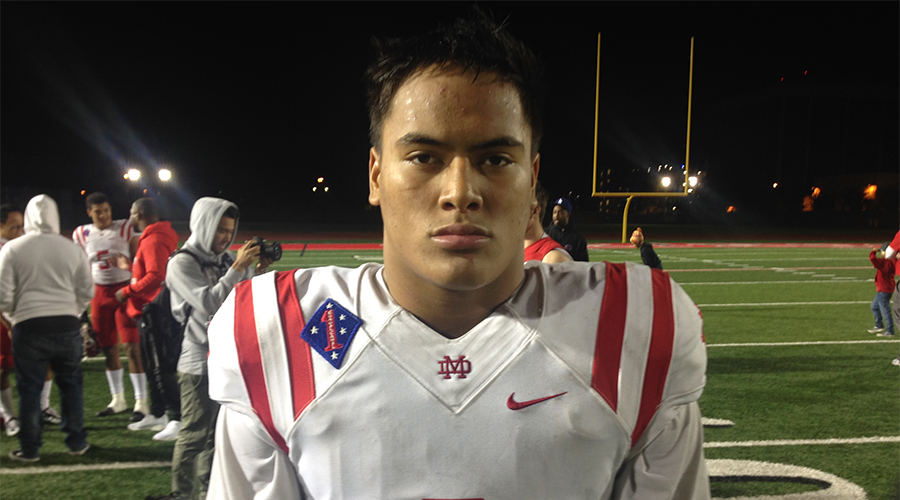 In arguably the most highly anticipated high school matchup of the week in Southern California, Santa Ana (Calif.) Mater Dei took down Long Beach (Calif.) Poly 55-13 in the second round of the CIF Southern Section Division I playoffs, and one big reason why was a dominating effort by a Monarchs defense led by linebacker Solomon Tuliaupupu.

Following the game, the Class of 2018 star was obviously pleased to come away with a victory, but his mind was already focused on gearing up for Mater Dei’s next opponent, the Mission Viejo (Calif.) Diablos.

“Coming in, we knew we just had to grind,” said Tuliaupupu, who compiled six tackles, including one for a loss. “We knew we just had to do what we do, and work hard like always. It was a great win, but you know, we have to come back tomorrow, start hitting the weights again, watching film, and just grind it out. Keep working hard.”

One of the most sought-after linebacker prospects in the nation, Tuliaupupu has kept his recruitment somewhat close to his vest throughout the process, but he does admit that there are some programs that are more involved with him than others.

While not in line for an official visit due to its proximity to home, it’s safe to say that USC is definitely a serious contender in the Tuliaupupu sweepstakes for a variety of reasons.

“You know, it’s just the tradition, and being able to play with a bunch of Polynesians as well,” Tuliaupupu said. “Coach [Johnny] Nansen, Coach [Clay] Helton, I have a great relationship with them. They’re great men. I talk to them every week. Coach Nansen, Coach Helton, everyone there hops on the phone.”

Standing 6-foot-3 and 220 pounds, Tuliaupupu could potentially play at any one of the four linebacker spots in the Trojans’ defense, but it sounds like the coaching staff is primarily targeting him to line up on the inside.

“They talk to me the most about playing the Mike linebacker or maybe the quick (Will),” Tuliaupupu said. “I don’t have a preference. I just love football.”

Tuliaupupu has taken in two Trojans home games in the Coliseum this fall, including this past weekend’s matchup between USC and UCLA, and he likes what he’s seen – particularly when it comes to Clancy Pendergast’s defensive group.

“They’re a great team,” Tuliaupupu said. “The linebacker corps is amazing, and their defense is amazing. They’re hard-nosed, work hard every week, and you know, I see that in the way that they play, and that’s what I like.”

A consistent participant in the offseason 7-on-7 circuit, Tuliaupupu is close to a number of players currently committed to USC, including his high school quarterback.

“Of course, JT [Daniels], and also IE [Palaie Gaoteote], Justin [Dedich] is my boy…I know a lot of those guys,” Tuliaupupu said. “There are too many to name. They work on me a little bit. But you know, we try to keep it professional, and focus on ourselves.”

Tuliaupupu will make his commitment announcement on National Signing Day. As he narrows things down in the weeks to come, he’s going to be keeping two things in mind above all else as he looks for the perfect fit.

“Preparation to be a man – you know, manhood after football, because football never lasts forever,” Tuliaupupu said. “And of course, being in a position to be able to support my family. Those are the two things I’m looking for.”

– 4-star defensive tackle Trevor Trout (Saint Louis, Mo./Chaminade) took an official visit to USC this past weekend, and he announced his verbal commitment to the Trojans immediately afterwards. Standing 6-3 and 315 pounds, he selected USC over Missouri, UCLA and Texas A&M among others. He joins Tuli Letuligasenoa (Concord, Calif./De La Salle) as the second interior defensive lineman to pledge to the Trojans from the Class of 2018. USC now has a total of 11 verbal commits in the class.

– USC offered Class of 2018 running back Kazmeir Allen (Tulare, Calif./Tulare) on Monday. A former Boise State pledge, he is having a huge senior campaign on the field, rushing for 2,738 yards and a California single-season record 66 touchdowns so far. Cal is another major player for the 5-10, 185-pound back, and he’s also hearing from the likes of Nebraska, Oregon and UCLA.

– Ontario (Calif.) Colony tight end Michael Ezeike committed to Oregon on Monday immediately after taking an official visit to Eugene this past weekend. He had been a longtime Ducks lean, but the Trojans had shown renewed interest in recent weeks, and with the de-commitment of tight end Camren McDonald (Long Beach, Calif./Poly) there was speculation that the USC staff might make a run at him.

– Rushed for 192 yards and three touchdowns on 22 carries, and he also caught three passes for 26 yards in a 42-12 victory over Bakersfield (Calif.) Garces Memorial.

– Had four catches for 55 yards and one touchdown in the loss to Mater Dei.

– Caught seven passes for 107 yards and two touchdowns in the victory over Long Beach Poly.

– Had three receptions for 43 yards in a 59-34 victory over Cerritos (Calif.) Valley Christian.

– Recorded his third interception of the season in a 55-28 victory over Rancho Cucamonga (Calif.).

– Completed 16 of 22 passes for 299 yards and three touchdowns with one interception, and he also rushed for 42 yards and two touchdowns on five carries in the victory over Long Beach Poly.

– Caught three passes for 65 yards, had one carry for four yards, rushed for a two-point conversion, he compiled 11 tackles (6 solo) including one for a loss, and he also recovered a fumble in a 41-14 victory over Fountain Valley (Calif.).

– Had five receptions for 102 yards and one touchdown in the victory over Rancho Cucamonga.

– Had five tackles (3 solo) including two for a loss, and two quarterback hurries in the victory over Long Beach Poly.

– Caught four passes for 98 yards and one touchdown in the victory over Long Beach Poly.

– Had 10 tackles (7 solo) including five for a loss and three sacks in a 42-13 victory over Huntington Beach (Calif.) Edison.

– Had 11 tackles (6 solo), two QB hurries and one pass deflection in the victory over Cathedral.

– Completed 24 of 34 passes for 374 yards and four touchdowns with one interception, and he also rushed for 51 yards on four carries in the victory over Rancho Cucamonga.

– Completed 26 of 45 passes for 328 yards and one touchdown, and he also rushed for 17 yards and two touchdowns on five carries in the loss to Upland.