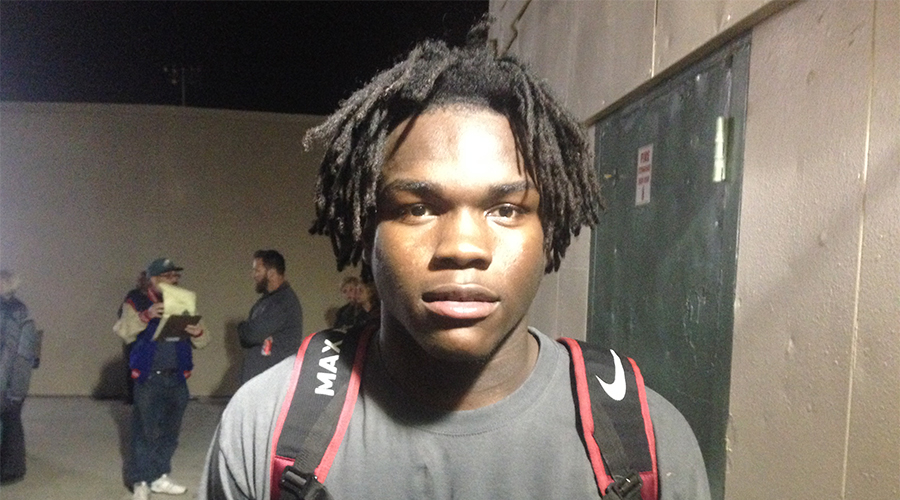 It was a light night of work for Class of 2018 prized prospect Jeremiah Martin this past Friday night. With his San Bernardino (Calif.) Cajon squad jumping all over an overmatched Palm Springs (Calif.) team right from the get-go on their way to a 48-6 victory in the first round of the CIF-SS Division 4 playoffs, the 6-foot-6, 245-pound defensive end never got a chance to get rolling.

An outstanding athlete who has compiled 23 sacks this season, he was taken out of the contest early in the third quarter, and even when he was in the game he was never quite able to show off the pass rushing skills that he’s known for.

But for Martin, who also stars on the basketball court at Cajon, the fact that his team came out on top was all that mattered in the end.

“We came out with a W, and it was a good win,” Martin said. “Everybody did their assignments. It wasn’t just about making plays, it was about sticking to your assignments, containing the quarterback and making sure that he doesn’t get the ball off, and that he doesn’t get out of the pocket, stuff like that. If they were more of a passing team, I would have been pass rushing more.”

On the recruiting front, Martin is currently wide open

“I’d probably say I hear the most from Utah, UCLA, USC, Washington, Oklahoma and Texas A&M,” Martin said. “A lot of schools are still recruiting me pretty hard.”

Martin has already taken two official visits, and he has a couple more in mind for the future.

“I’ve already taken official visits to Oklahoma and Texas A&M,” Martin said. “I don’t have any others set up, but I know probably Utah, and I’ll visit Washington coming up in January for sure. That’s it right now.”

Notably missing from the official visit discussion are the two local schools, USC and UCLA, but according to Martin, that doesn’t mean that either program has less of a chance at landing him. In fact, he’s already unofficially visited both of those campuses on a number of occasions, and he simply doesn’t feel the need to use one of his official visits on either school due to their proximity to home.

“They’re so close, I can always take an unofficial visit to USC or UCLA,” Martin said. “Those could be an unofficial because I know players on the team, so then I can hang out with the players after the game, so it feels like an official.”

Martin, who received an offer from the Trojans immediately after a standout performance at the Elite Camp this past June, makes it clear that he has genuine interest in USC, and much of it is due to the coaching staff.

“I have a good relationship with those guys,” Martin said. “I talk to them almost every day. They text me facts about their school, and then every Wednesday I have a call with Coach [Johnny] Nansen or Coach [Clay] Helton. Coach Nansen likes me as an outside linebacker/defensive end type – standing up or with my hand down.”

Somewhat of a regular at the Coliseum this fall, Martin likes what he has seen from the USC defense.

“I went to the Stanford game, and I’ve actually been to three or four games there this year,” Martin said. “The atmosphere is always great there. No. 45 (Porter Gustin), I was watching him early in the year, and he’s a beast. The defense has been great. The defense wins games, the offense sells tickets, and they’ve done a pretty good job at winning.”

“I’ll make a decision in late January, almost February,” Martin said. “I’ll probably come out with a commitment video, or I’ll put out the five hats, something simple.”

As for the deciding factors in his final decision, Martin has three specific things that he’s going to be taking into account.

“If it feels like home, education and if I can play my freshman year.”

Martin and Cajon will take on San Juan Capistrano (Calif.) San Juan Hills in the second round of the playoffs this coming Friday.

After rumors had begun to swirl in recent days, Class of 2018 tight end Camren McDonald announced on Monday that he was de-committing from USC via his Twitter account.

The Long Beach (Calif.) Poly standout originally verballed to Helton and staff this past June. But after McDonald recently took official visits to Nebraska and Texas A&M, and then the Trojans extended an offer to elite junior college tight end Dominick Wood-Anderson (Yuma, Ariz./Arizona Western College) speculation began to circulate that his pledge wasn’t exactly solid, so Monday’s news didn’t come completely out of left field.

In addition to Wood-Anderson, another tight end to keep an eye on is Ontario (Calif.) Colony’s Michael Ezeike, whom the Trojans have shown increased interest in as of late.

With the loss of McDonald, USC now has 10 players committed from the Class of 2018.

* Class of 2018 offensive lineman Penei Sewell (Saint George, Utah/Desert Hills) revealed that he will take an official visit to USC this coming weekend for the UCLA game. He has previously visited Alabama, Nevada, Oregon and Utah.

* St. Louis (Mo.) Chaminade defensive tackle Trevor Trout is another player who will be at USC this weekend on an official, and on Sunday he revealed that he will announce his commitment soon afterwards on Nov. 20. Trout previously announced a top 5 of Alabama, Georgia, Miami, UCLA and USC.

* Norco (Calif.) offensive lineman Jarrett Bell (6-4, 287) de-committed from Alabama this past weekend. He does not currently hold an offer from USC, but the Trojans have shown interest and he could be someone to watch. Arizona, Texas and UCLA are others who figure to be in the mix.

– Had four tackles and one sack, blocked a punt, and he recorded a safety in a 51-6 victory over Las Vegas (Nev.) Faith Lutheran.

– Had seven carries for 140 yards and one touchdown in a 38-0 victory over Washington (DC) Eastern.

– Caught four passes for 33 yards one touchdown, and he rushed for 19 yards on two carries in a 42-14 victory over Portland (Ore.) Lincoln.

– Had eight carries for 44 yards and two touchdowns on offense, recorded six tackles (4 solo) and one interception on defense, and he also returned a punt 31 yards for a touchdown in a 60-44 victory over San Juan Capistrano (Calif.) JSerra.

– caught six passes for 58 yards and one touchdown in the victory over JSerra.

– Compiled four tackles (2 solo) and one interception, and he also caught a 28-yard touchdown pass in a 38-36 loss to Mission Viejo (Calif.).

– Caught four passes for 106 yards and two touchdowns in a 49-7 victory over Murrieta (Calif.) Vista Murrieta.

– Had eight tackles (4 solo) including 1.5 for a loss and half a sack in the victory over Vista Murrieta.

– Completed 12 of 18 passes for 231 yards and three touchdowns in the victory over Vista Murrieta.

– Caught three passes for 45 yards, and he added a sack on defense in the victory over Vista Murrieta.

– Completed 18 of 23 passes for 306 yards and three touchdowns, and he also rushed for 25 yards and one touchdown in the victory over Bishop Amat.

– Completed 28 of 38 passes for 257 yards and three touchdowns, and he rushed for 83 yards and one touchdown on 11 carries in the victory over Redlands East Valley.