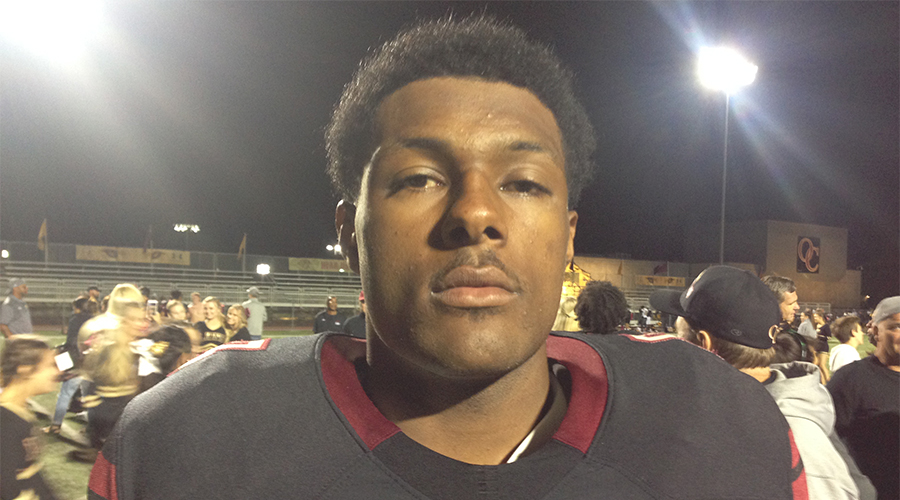 It was a night of mixed emotions for highly touted Class of 2019 prospect Kayvon Thibodeaux and his Westlake Village (Calif.) Oaks Christian teammates this past Friday night. The Lions thoroughly dominated Newbury Park (Calif.) by a final score of 48-0, but they also lost star linebacker Bo Calvert in the process. The USC pledge went down with a broken leg late in the second quarter, and following the contest it was apparent that Thibodeaux had the senior leader in his thoughts as he walked off the field.

“Losing Bo was big,” Thibodeaux said. “That’s my brother, that’s family. So, it hurt. I cried. When we went into halftime nobody said a word, but in a time of adversity we overcame.”

Thibodeaux certainly did his part in the big win, which improved Oaks Christian’s record to 5-2 on the season. Standing 6-foot-5 and 235 pounds, he was a force from his defensive end spot, compiling seven tackles including four for a loss and three sacks, six quarterback hurries, and he also forced a fumble. With Thibodeaux in his face all night, Newbury Park quarterback Cameron Rising – a Texas commit – was never able to get in a rhythm, passing for a total of just 106 yards.

Having transferred to Oaks Christian from Los Angeles (Calif.) Dorsey this past offseason, Thibodeaux has obviously made a seamless transition, and not just on the field.

“It’s been great,” said Thibodeaux, who also lines up at tight end at times for the Lions. “I’m loving the school, and really everything about it. It’s just a working process.”

When it comes to recruiting, Thibodeaux has been a known commodity since he was a freshman. And with close to 30 offers currently, it’s safe to say that he has plenty of options.

“I’ve got my eyes on SC, UCLA, Stanford, LSU…it’s still early for me so I’m still looking at a lot of schools right now,” Thibodeaux said.

The Trojans were the fourth school to offer Thibodeaux, throwing their hat in the ring way back in the spring of his sophomore year, and he admits to having genuine interest in USC, and not just because of the storied football program.

“It’s my hometown, and it’s a great school,” Thibodeaux said. “At the end of the day I have to live my life outside of football, and they have a great law program, and it’s just a great education in general.”

Another reason for Thibodeaux’s interest in the Trojans is Head Coach Clay Helton and the rest of the USC coaching staff.

“I talk to Coach Helton, Coach Tee Martin and Coach Gavin [Morris],” Thibodeaux said. “It’s cool. We talk probably twice a week. I have a solid relationship with all of them.”

Thibodeaux is being targeted by the staff to line up on the edge at predator outside linebacker, and he paid special attention to the position when he attended a USC victory in the Coliseum earlier this fall.

“I went to the Stanford game,” Thibodeaux said. “When I was at the game I watched that Predator position, and they have a lot of great guys over there. They have a great team. A lot of young guys are playing.”

That wasn’t the only time Thibodeaux has been on campus. He also participated in the Rising Stars Camp this past summer, and he’s taken in a number of USC practice sessions in the past as well.

All of that being said, as just a junior, Thibodeaux has no leader or group of favorites at this point in time.

Thibodeaux plans to make a final decision at some point during his senior season.

– The Trojans offered Class of 2018 defensive end and current UCLA commit Abdul-Malik McClain (San Juan Capistrano, Calif./JSerra) on Monday night. Having pledged to the Bruins back in July, he’s had a stellar senior campaign on the field so far.

– Elite Class of 2018 dual-threat quarterback Justin Fields committed to Georgia late last week over the likes of USC, Florida, Florida State, Alabama, Auburn and LSU. A one-time Penn State pledge, Fields reportedly took an unofficial visit to USC this past offseason, but it does not appear that they were seriously in the running in the end. The Trojans do not currently have a verbal commitment from a quarterback from the Class of 2018, although they do have one from the Class of 2019 in JT Daniels (Santa Ana, Calif./Mater Dei).

– Had a 15-yard touchdown run, three tackles, and two pass deflections in a 63-0 victory over Anaheim (Calif.) Esperanza.

– Had nine tackles (6 solo), including three for a loss, and he also forced a fumble, recovered a fumble, and he blocked a punt in a 48-13 victory over Carson (Calif.).

– Had three receptions for 14 yards, three tackles, and one interception that he returned 40 yards in a 13-10 victory over Los Angeles (Calif.) Loyola.

– Had seven tackles (3 solo) including three for a loss and 2.5 sacks, and he also forced a fumble and blocked a punt in a 57-20 victory over Studio City (Calif.) Harvard-Westlake.

– Caught three passes for 169 yards and one touchdown on offense, and he compiled five tackles (all solo) in a 52-36 loss to San Juan Capistrano (Calif.) JSerra.

– Caught three passes for 11 yards in the victory over Loyola.

– Had 12 tackles (6 solo) including one sack in the victory over Loyola.

– Caught four passes for 46 yards in the victory over Loyola.

– Had six tackles (4 solo) including one for a loss in the victory over Santa Margarita.

– Completed 24 of 29 passes for 362 yards and six touchdowns in the victory over Santa Margarita.

#MaterDei getting ready for Kickoff led by QB @jtdaniels #HSFB

– Had two receptions for 48 yards and one touchdown in a 42-21 victory over Orange (Calif.) Lutheran.

– Had five receptions for 110 yards and one touchdown in the loss to St. John Bosco.

– Had three tackles (all solo) including one for a loss, and one pass deflection in the victory over Santa Margarita.

– Had two receptions for 28 yards in the victory over Santa Margarita.

– Caught four passes for 30 yards and one touchdown in a 52-14 victory over Westlake Village (Calif.) Westlake.

– Had 16 tackles including three for a loss, one interception, and he also rushed for a touchdown in a 30-23 victory over Rancho Cucamonga (Calif.).

– Had seven tackles (4 solo) including one for a loss in the victory over Loyola.

– Completed 11 of 17 passes for 159 yards and three touchdowns, and he also rushed for 38 yards in the victory over Orange Lutheran.

– Had two receptions for 43 yards in the victory over Westlake.

– Completed 17 of 20 passes for 287 yards and three touchdowns, and he also rushed for two touchdowns in the victory over Harvard-Westlake.

Garry Paskwietz and Randy Taylor talk USC quarterback recruiting, the performances from Justin Flowe and Jeremiah Criddell in Upland vs Rancho Cucamonga game, and the Taylor topic of the week