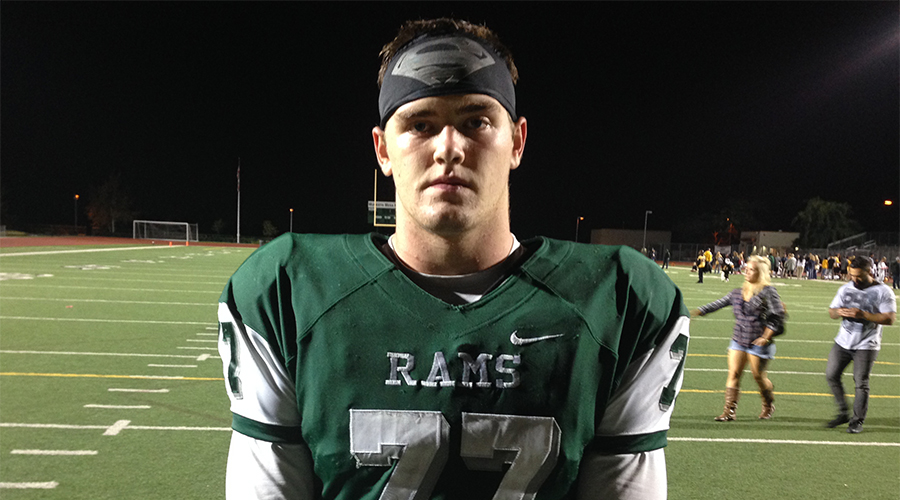 After a whirlwind week in which USC, the school that Nathan Smith signed early enrollment papers with last month, fired Steve Sarkisian, the Class of 2016 offensive tackle prospect came through with a strong performance for Murrieta (Calif.) Mesa in the team’s 31-14 victory over Temecula (Calif.) Valley this past Friday.

Smith did a little of everything, making a huge impact at his normal left tackle spot, as well as all along the defensive line, and even on special teams where he blocked a field goal.

“It was a fun night,” said Smith, who stands 6-foot-7, 273 pounds. “I moved around from defensive end, to three-technique, and I actually ended up shining a little bit more at three-technique. That blocked field goal – I’ve been waiting to do that all year. I finally jumped high enough.”

Following the victory, which improved Mesa’s record to 4-3 on the season, Smith momentarily switched his focus to his recruitment. While he has already signed a financial-aid agreement with USC, Smith isn’t technically bound to the Trojans, meaning that, in the wake of Sarkisian’s departure, he is free to be recruited, and ultimately, to wind up elsewhere. But while there is a chance that he could still take some official visits down the line, for now, he remains committed to USC, and as he revealed, there’s a good chance things stay that way.

“Ever since the news came down, there’s been people around me trying to push me to take some officials, but I’m not sure I want to do that yet,” Smith said. “I committed to a school, not a coach, so I’m pretty solid on USC.”

Arizona, Arizona State and Nebraska are some of the programs that quickly reached out to Smith to make it abundantly clear that they still have room for him. For a prospect who intentionally committed early to put the craziness associated with the recruiting process on the backburner, the renewed attention brings with it both good points and negatives.

“Probably five minutes after Coach Sarkisian was placed on indefinite leave other schools started contacting me,” Smith said. “It was pretty crazy. The whole process started all over again. Even though it’s a blessing, it’s not my favorite thing in the world. I’m not really one for attention.”

For the time being, Smith just sees too many positives in USC to really dive into the process full bore again.

“It’s really the tradition, and what probably sold it for me was all of the connections in Southern California that I can get with a degree from USC,” Smith said. “That’s really what sold it for me because I’d like to live in Southern California. Plus, I love the offensive line coach, Coach [Bob] Connelly, and the offensive coordinator, Coach [Clay] Helton, and all of those guys.”

It’s Connelly and Helton, the recently named interim head coach, whom Smith has become the closest with on the USC staff, and the two coaches both made sure to speak with him last week.

“I talked to Coach Connelly and Coach Helton,” Smith said. “Right now they’re focused on the season. They want to win, and they’re moving on. They’re doing their job. They told me that the goal hasn’t changed. They’re going to go out there and they’re going to play their butts off.”

With Smith having built up such a solid relationship with both Trojans coaches, he’s hoping that they are still around next year. But if that doesn’t happen, and a new staff comes in, he could open his recruitment back up.

“If both of them leave I would probably take my officials, because those are the people I know there,” Smith said. “I don’t really know for sure, though, to be honest. I would wait and see.”

With Smith set to graduate early and enroll at the school of his choice in January, however, any other program would have a short period of time to make a big impression.

“It’s hard to beat USC,” Smith said. “It would have to be a heck of a sales pitch, and I’ve heard about all of them.”

– There were a number of high-profile recruits who took in the Trojans’ 41-31 loss to Notre Dame in South Bend (Ind.) this past Saturday, including former USC linebacker commit Daelin Hayes (Ann Arbor, Mich./Skyline), as well as Class of 2016 wide receiver Javon McKinley (Corona, Calif./Centennial).

– The Trojans recently offered another Oaks Christian standout, Class of 2018 quarterback Matt Corral. USC is the first school to offer the talented passer.

– Compiled seven tackles with two tackles-for-loss including one sack in a 20-14 victory over Auburndale (Fla.).

– Caught two passes for 27 yards and two touchdowns on offense, and recorded three tackles on defense in a 52-6 victory over Long Beach (Calif.) Poly.

– Had four tackles and one pass deflection in a 33-29 loss to Bellaire (Texas).

– Rushed for 195 yards on 24 carries, and completed 10 of 22 passes for 94 yards and one touchdown with two interceptions in a 35-17 victory over West Torrance.

– Caught nine passes for 180 yards and three touchdowns, and rushed for 13 yards and one touchdown on two carries in a 49-34 victory over Glendale (Ariz.) Apollo.

– Caught seven passes for 135 yards and three touchdowns, and also had a 55-yard punt return for a touchdown in a 42-6 victory over Strawberry Plains (Tenn.) Carter.

– Rushed for 236 yards and three touchdowns on 34 carries, while also making a four-yard touchdown receptions in a 32-17 victory over Oakley (Calif.) Freedom.

– In a 40-39 loss to Camarillo (Calif.), Holmes had nine receptions for 121 yards and two touchdowns on offense, while compiling six tackles and one pass deflection on defense.

– Rushed for 159 yards and two touchdowns on 11 carries, and caught three passes for 46 yards in a 47-0 victory over Los Angeles (Calif.) Locke.

– Had five receptions for 97 yards and one touchdown on offense, and compiled 10 tackles with two sacks on defense in the victory over Locke.

– Completed 17 of 28 passes for 315 yards and two touchdowns while also rushing for a touchdown in a 30-14 victory over Honolulu (Hawaii) Punahou.

– Caught six passes for 101 yards and one touchdown in the victory over Locke.

– Rushed for 67 yards and one touchdown on 15 carries, and caught two passes for 32 yards in a 27-22 victory over Sherman Oaks (Calif.) Notre Dame.