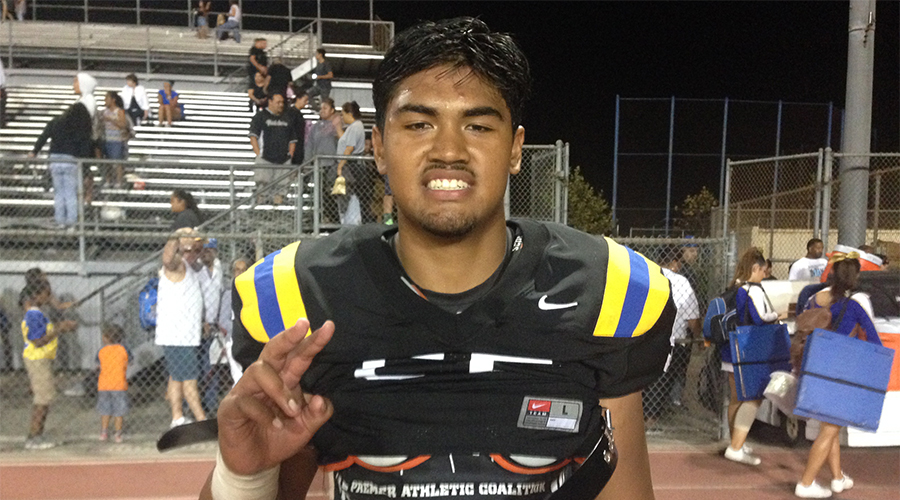 With a tough early-season non-league schedule that included just one victory and losses to some formidable programs in Bellflower (Calif.) St. John Bosco, and in the past two weeks, Santa Ana (Calif.) Mater Dei and San Clemente (Calif.), Class of 2016 USC defensive line commit Keanu Salepaga and his La Mirada (Calif.) team returned to their winning ways this past Friday night with a 52-7 victory over Norwalk (Calif.).

“Those teams we faced early on, we knew they were tough,” Salepaga said. “We knew they were challenging, but we were preparing ourselves for later on, and in the playoffs, so now we’re just focused on staying healthy and coming together as a team.”

A physical prospect with 6-foot-6, 265-pound size and what is thought to be a sky-high ceiling, Salepaga received an offer from the Trojans and committed on the spot after a standout showing at their Lineman Camp this past June.

With Norwalk avoiding Salepaga’s side of the field on Friday, however, and La Mirada jumping out to a quick lead, he was pulled from the game early in the second half without getting much of a chance to showcase his talents, but he maintained a positive mindset just the same.

“The main thing is, it’s all about my teammates now,” Salepaga said. “So as long as we get the win, and they do well, and they get the playing time for all the scouts to see, then I’m good.”

Following the game, Salepaga, who also held offers from the likes of Arizona, Arizona State, Boise State and Texas Tech when he gave his pledge to USC, said that he’s still all Trojan.

“I’m still solid to USC, the same as when I committed,” Salepaga said. “I’ve been all USC since I was born. It’s the hometown school, and it was always a dream of mine to go there since I was little. So when I got the chance to commit, I knew what I wanted to do. It’s just home for me.”

But that hasn’t stopped other programs from coming after him. At this point, however, the only official visit that he plans to take is to USC – sometime after his senior season.

“There are some other schools trying to talk to me – Texas Tech, Arizona State, Boise State and some others,” Salepaga said. “But I haven’t gotten far enough with any of them to talk about going out and seeing their school.”

In constant contact with USC running backs coach Johnny Nansen as well as with defensive line coach Chris Wilson, Salepaga said that he feels a high level of comfort with the Trojans coaching staff, as well as with the role that they envision for him.

“From the camp, and when I committed, they talk to me a lot about the three-technique spot, so inside the tight end,” Salepaga said.

With that in mind, Salepaga has been paying close to attention to Wilson’s defensive line group throughout the Trojans’ first four games.

“I haven’t had a chance to make it to a game, but I’ve been watching them on T.V.,” Salepaga said. “When I watch, I’m looking at Coach Wilson’s schemes, and how he runs everything. And I’m also just paying attention to things like who the seniors are and who’s leaving, just so I can be ready when I get my chance to move up.”

One other thing that Salepaga has been keeping an eye on is USC’s recruiting class that is taking shape, and as one of 16 current verbal commits, he’s excited for the future.

“It’s great, because they’re not only getting the top local kids, but they’re recruiting nationally and getting players from all over, from Florida and everywhere,” Salepaga said. “I like the way they’re thinking.”

– USC announced that three Class of 2016 recruits have signed early enrollee financial-aid papers with the Trojans in linebacker Daelin Hayes (Ann Arbor, Mich./Skyline), defensive back C.J. Pollard (Gardena, Calif./Serra) and offensive lineman Nathan Smith (Murrieta, Calif./Mesa). The papers bind USC to the recruits, while also paving the way for them to arrive on campus in January, but the signees, themselves, are still not bound to the university.

– There were a number of Trojans recruits with offers who were on hand to see USC’s 42-14 victory over ASU in Tempe (Ariz.) this past Saturday, including Class of 2016 prospects Lamar Jackson, Jackie Jones, Connor Murphy and Jordan Parker, Class of 2017 prospects Greg Johnson, Keyshawn Johnson Jr. and Joseph Lewis, as well as Class of 2018 prospect Jalen Hall.

– Had three tackles with one tackle-for-loss in a 30-0 victory over Miami (Fla.) Dr. Krop.

– Completed 15 of 28 passes for 145 yards and two touchdowns with one interceptions, while also rushing for 120 yards and four touchdowns on 10 carries in a 43-0 victory over Inglewood (Calif.).

– Had nine receptions for 220 yards and three touchdowns in a 55-7 victory over Lake Balboa (Calif.) Birmingham.

– Had seven receptions for 95 yards and one touchdown in a 56-7 victory over Sherman Oaks (Calif.) Notre Dame.

– Caught seven passes for 133 yards and one touchdown in a 35-7 victory over Compton (Calif.) Dominguez.

– Caught seven passes for 160 yards and three touchdowns in a 67-30 victory over Long Beach (Calif.) Wilson.

– Rushed for 215 yards and three touchdowns in a 38-21 victory over Wildomar (Calif.) Elsinore.

– Rushed for 159 yards and two touchdowns on six carries in a 52-0 victory over Pinole Valley (Calif.)

– Completed 21 of 38 passes for 346 yards and one touchdown with two interceptions, while also rushing for 72 yards and two touchdowns on 11 carries in a 51-45 loss to Honolulu (Hawaii) Punahou.