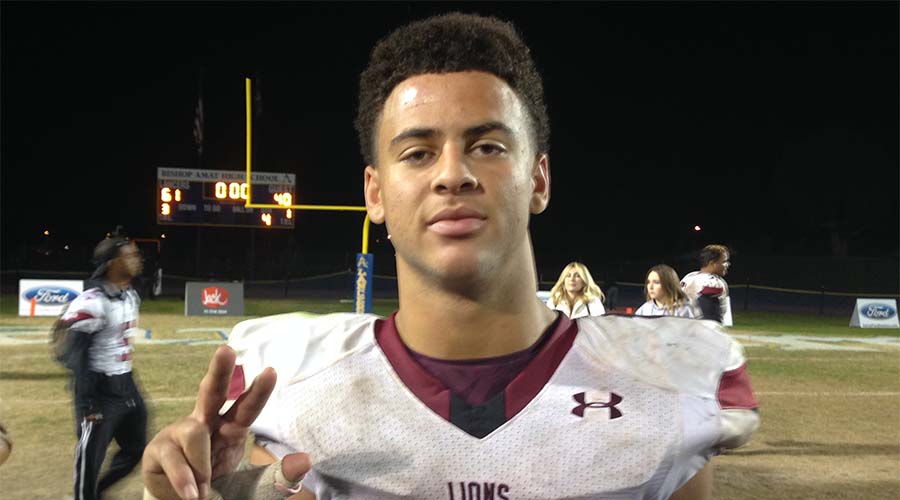 In a CIF-SS Pac-5 quarterfinal playoff game that showcased wall-to-wall talent, ESPN 300 wide receiver and USC commit Michael Pittman put on a performance for the ages this past Friday night for Westlake Village (Calif.) Oaks Christian, hauling in 16 passes for 356 yards and five touchdowns, including a 99-yard scoring grab in the second quarter.

Despite his incredible outing, Pittman and the Lions saw their season come to an end as they wound up on the losing end for the first time this season, 61-40, to a La Puente (Calif.) Bishop Amat team that featured a pair of Class of 2016 Trojans pledges of their own in wide receiver Tyler Vaughns and athlete Trevon Sidney.

But with his team having shown vast improvement from a 2014 campaign in which they failed to even make the playoffs, the 6-4 Pittman was able to reflect back on what his team was able to accomplish this year, and to appreciate the moment.

“I owe everything to my teammates because they just let me come out here and put on a show,” Pittman said. “Unfortunately we didn’t come up with a win, but I’m super proud of them — from going from 5-5 to 11-1, it’s a great thing.”

With his final campaign in high school in the books, Pittman can now turn his attention to his future, which at this point still revolves around USC, especially if Trojans interim head coach Clay Helton is retained.

“I’m a hard USC commit unless the staff changes, and then I might rethink a little bit,” Pittman said. “I’m in contact with Coach Helton, Coach Tee [Martin] and Coach [Marques Tuiasosopo]. They all hit me up. I’m kind of anxious because I kind of want Coach Helton to stay coach.”

It’s the family atmosphere that Helton has instilled in the USC program, in particular, that has impressed Pittman.

“I like the staff they have now because I think he’s really pulled the team together and rallied them,” Pittman said. “They go out and do movie nights. They do family dinners and stuff like that, and that’s just great team bonding. I just want to be a part of that.”

With USC going down in defeat to Oregon this past Saturday, giving the Trojans their second loss under Helton, his future as the team’s potential head coach figures to be up in the air. But even if another candidate is hired to take on the permanent role, that doesn’t necessarily mean that Pittman will wind up elsewhere.

Complicating matters, though, is the fact that Pittman is on pace to graduate from Oaks Christian early so that he can enroll at the school of his choice in January. He’s already signed a financial-aid agreement with USC, but that only binds the school to Pittman, and not vice-versa.

With that in mind, if a new staff were to be brought in at USC following the season, Pittman would want to meet with them in a hurry to start to build a solid relationship.

“I’d want to talk to them right away, because I’m going to enroll early,” said Pittman, who will play in the U.S. Army All-American Game in San Antonio [Texas] on Jan. 9. “I would want to get in contact with them as soon as possible so I could figure things out.”

Currently in that wait-and-see mode, Pittman is still being pursued heavily by UCLA, where he committed as a junior before flipping his pledge to the Trojans this past summer. He recently took an unofficial visit to UCLA, and the offer of an official visit has been thrown out by the Bruins staff, but he’s unsure if he’ll take them up on it.

“That’s a possibility,” Pittman said, “but right now I’m not really thinking about that.”

The only official visit that Pittman knows that he’s going to take for sure, at least for now, is to USC on the weekend of Dec. 2.

– Completed 4 of 8 passes for 62 yards and one touchdown, and rushed for 157 yards and two touchdowns on 28 carries on offense, and he also made two interceptions on defense in a 28-14 victory over Ontario (Calif.) Colony.

– Caught a 13-yard TD pass in the victory over Oaks Christian.

– Had a 10-yard TD reception and made a key interception in the victory over Oaks Christian.

– Had eight tackles with four tackles-for-loss including two sacks in a 28-17 loss to Santa Ana (Calif.) Mater Dei.

– Rushed for 180 yards and three touchdowns on 18 carries, and completed 8 of 32 passes for 45 yards with one interception in a 35-21 loss to Manhattan Beach (Calif.) Mira Costa.

– Caught six passes for 133 yards and two touchdowns in a 55-14 victory over Avondale (Ariz.) Westview.

– Compiled nine tackles with one tackle-for-loss and two pass deflections in a 53-28 victory over Rancho Santa Margarita (Calif.) Tesoro.

– Caught six passes for 99 yards and one touchdown, and rushed for 56 yards on five carries on offense, and he also came up with an interception on defense in a 33-7 victory over Lawndale (Calif.)

– Had six receptions for 92 yards in the victory over Lawndale.

– Caught four passes for 72 yards and two touchdowns in the victory over Arbor View.

– Had four receptions for 48 yards in the loss to Bishop Amat.

– Completed 24 of 42 passes for 435 yards with five touchdowns and two interceptions in the loss to Bishop Amat.