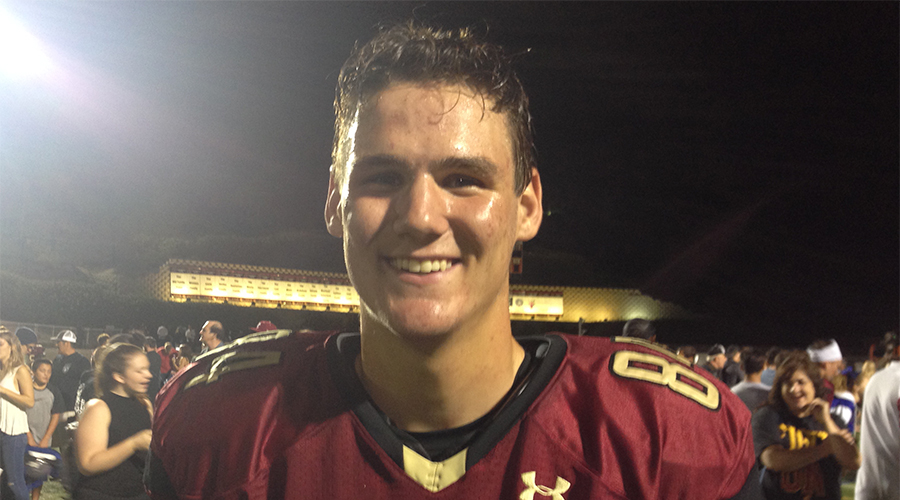 Class of 2017 tight end Colby Parkinson has seen his stock rise over the course of the current season, a fact reflected in a big new offer that came his way recently from the USC Trojans.

Part of a Westlake Village (Calif.) Oaks Christian team that also includes Class of 2016 Trojans early-entrant signee Michael Pittman, Parkinson had another strong showing this past Friday night in the Lions’ 48-6 victory over Thousand Oaks (Calif.), hauling in two passes for 18 yards and one touchdown, while also making an impact at defensive end, as well as on special teams as a long-snapper.

A victory that also included a 285-yard rushing effort by Gil’Scott Jackson, it pushed Oaks Christian’s record to a perfect 7-0 on the season.

“It was a huge team effort,” said Parkinson, who stands 6-foot-6 and 225 pounds. “We came out and we dominated in every aspect of the game. Gil had a huge game tonight, and every game it can be someone else. It can be me, it can be Gil, it can be Pittman…we have so many weapons and you can’t stop all of us.”

In addition to the Trojans, Parkinson also holds offers from Cal, Ole Miss, Tennessee, Washington and Washington State, but at this early stage of the process he’s still completely open.

“As of now, I have a top 6, and those are my six offers,” said Parkinson, who noted that he hopes to major in architecture or engineering in college.

Still, having grown up watching USC, he admitted that his newest offer is significant.

“It really means a lot to get that offer, especially being a local school,” Parkinson said. “I’ve loved SC since I can remember, so to get an offer from them, it’s definitely one to beat for sure.”

Like many Southern California prospects, Parkinson watched the Trojans’ disappointing 17-12 loss to Washington on T.V. last Thursday. When asked if USC’s less-than-stellar showing could have an impact on his line of thinking, Parkinson gave an interesting response, particularly in light of Monday’s announcement that Steve Sarkisian has been terminated as head coach of the Trojans.

“I don’t think so, because everything can change so much in two years,” Parkinson said. “People can come and go, so it just depends. I’m not really sure where I’m going to go yet. I’m really just taking it easy and trying to focus on this season.”

One person that Parkinson has already built up a strong relationship with at USC, however, is assistant coach Marques Tuiasosopo, whom he’s been sure to keep close tabs on during the two Trojans games that he’s taken in this year –Idaho and Stanford.

“I watch Coach Tuiasosopo, and how he interacts with his players,” Parkinson said. “That’s a big thing. I love Coach Tui. He’s a great guy, and it would be fun to interact with him going there.

We haven’t really talked about what kind of plans that he has for me, but he said that he likes my ability to stretch the field, but most importantly he wants me to stay the same. He doesn’t want me to change who I am based off my offers.”

Another school that Parkinson checked out recently, but that hasn’t offered at this point, is Stanford.

“They’re a top caliber team, a top caliber school, so the interest is obviously there,” Parkinson said. “I’m interested in a lot of schools, but Stanford is up there.”

As just a junior, however, Parkinson is making a concerted effort to keep his recruitment on the backburner for now, choosing instead to focus on the season at hand.

“We have a bye next week, but I want to be 8-0 in two weeks,” Parkinson said. “I’m more focused on that than any of my offers or anything like that. It’s more important, and that’s what I’m focused on.”

– Following the news of Sarkisian’s leave of absence and eventual firing, Class of 2016 linebacker Daelin Hayes, who recently signed early-enrollment papers with the Trojans, announced his de-commitment from USC.

– Another Class of 2016 USC pledge, wide receiver Velus Jones, announced that he is still verbally committed to the Trojans, but that his recruitment is open.

– Compiled six tackles with three tackles-for-loss including two sacks in a 31-13 victory over Leesburg (Fla.).

– Ran for two touchdowns and passed for one more in a 28-7 victory over West Covina (Calif.) South Hills.

– Had five tackles with one tackle-for-loss in a 32-0 victory over Huntington Beach (Calif.) Marina.

– In a 56-35 victory over Minette (Ala.) Baldwin County, Jones had four carries for 83 yards and two touchdowns, caught one pass for 68 yards and one touchdown, and he also returned a kickoff 76 yards for a touchdown.

– Passed for four touchdowns, ran for two touchdowns, and returned a kickoff 90 yards for a touchdown in a 49-0 victory over Compton (Calif.) Centennial.

– Had one catch for nine yards in the victory over Thousand Oaks.

– Had one catch for 16 yards, one carry for 18 yards, and he also compiled five tackles with one tackle-for-loss on defense in a 48-0 victory over Danville (Calif.) San Ramon Valley.

– In a 56-14 victory over Scottsdale (Ariz.) Desert Mountain, Murphy had five receptions for 87 yards and one touchdown, 3 carries for 20 yards, and he also came up with an interception.

– Rushed for 126 yards and three touchdowns on four carries in a 53-14 victory over Brentwood (Calif.) Heritage.

– Had four tackles and one sack in a 45-12 victory over Fontana (Calif.) Miller.

– Completed 19 of 31 passes for 250 yards and one touchdown with one interception, while also rushing for 84 yards and two touchdowns on eight carries in a 31-7 victory over Honolulu (Hawaii) Iolani.

– Rushed for 106 yards and two touchdowns on 27 carries in a 43-30 victory over Mission Hills (Calif.) Bishop Alemany.