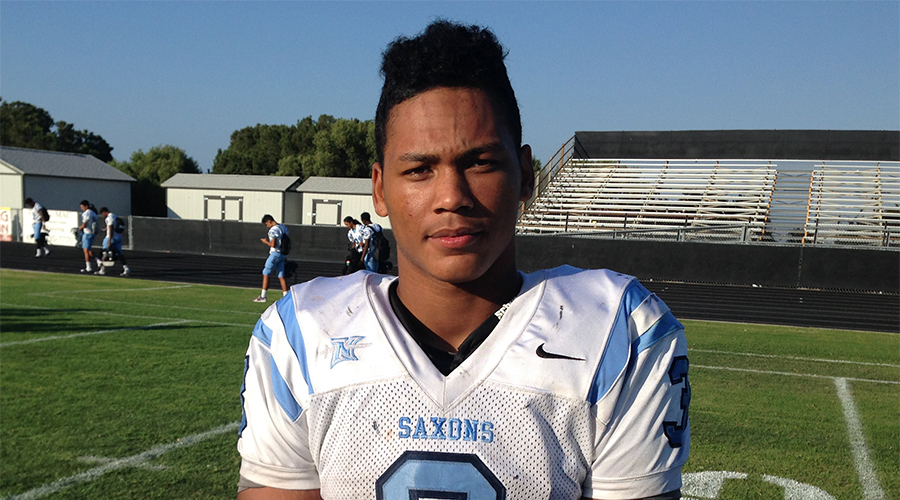 With his North Torrance (Calif.) team having gone down in defeat to Redondo Beach (Calif.) Redondo Union in their season-opener one week earlier, ESPN 300 linebacker and USC commit Mique Juarez was determined to do everything that he could to ensure that the Saxons came away with a victory over Rolling Hills Estates (Calif.) Peninsula this past Friday, and it’s safe to say that’s exactly what he did…and then some.

Lining up at quarterback, linebacker, safety, defensive end as well as on special teams as a punt and kick return man, Juarez put on a one-man show. On offense, the dynamic 6-foot-2, 226-pound athlete passed for three touchdowns, rushed for three scores and ran for a two-point conversion, and he also made his presence felt on defense, coming up with some big hits in a 40-14 victory.

But even after all that, Juarez said afterwards that he wasn’t satisfied with his performance, noting that he isn’t where he wants to be right now, physically, after suffering a hamstring injury at The Opening this past summer that threw a wrench into his offseason conditioning regimen.

“I’m not playing at my highest potential right now,” Juarez said. “I know I have some improving to do, but other than that, I give myself some good credit. But my team did everything to help me out here today.”

On the recruiting front, Juarez gave a verbal pledge to USC this past January, and while he’s been open with the fact that his recruitment is still far from over, he says that, at least at this point, he’s still all Trojan.

Before finishing, however, he did add:

“You never know. Anything could happen.”

That tone of uncertainty has been a mark of Juarez’s recruitment from the beginning. In addition to the Trojans, he has heavy interest in UCLA, and on Friday he said that he’s hoping to set up official visits to Nebraska, Ole Miss and Oregon, as well as to either Michigan or Oklahoma. Neither USC nor UCLA are in line for official visits due to the fact that he’s already visited each campus on a number of occasions unofficially, and he plans to continue to do so.

As for what is keeping him with the Trojans right now, Juarez said that it’s primarily his relationship with linebackers coach Peter Sirmon and the rest of the staff.

“They’re special people to be around,” said Juarez, who said that Sirmon envisions him filling a role similar to Su’a Cravens at ‘sam’ linebacker. “They’re always there, they’re always trying to talk to me, and just being around them, you feel good about them.”

With Juarez still evaluating things, he said that he’s going to be keeping close tabs on the different programs under consideration this fall, particularly USC and UCLA.

Whether or not the Trojans hold on and win out in the Juarez sweepstakes remains to be seen, and it’s something that might not be completely settled until signing day.

“As of right now, I committed to USC, and I’m good with the decision that I made,” Juarez said, “but as I said, anything can happen.”

– Class of 2016 linebacker and Trojans pledge Daelin Hayes (Ann Arbor, Mich./Skyline) took an unofficial visit to Notre Dame this past weekend, but remains committed to USC.

– ESPN 300 cornerback Byron Murphy (Scottsdale, Ariz./Saguaro) recently narrowed his list of schools under consideration to eight, and USC made the cut. Others on the list include Arizona State, Texas A&M, Texas, Washington, Oklahoma, Ole Miss and Arizona.

– Completed 9 of 13 passes for 162 yards and two touchdowns with one interception, while also rushing for 62 yards in a 24-14 victory over Alta Loma (Calif.).

– Had 8 tackles, one sack, one forced fumble on defense, while also catching a seven-yard touchdown pass on offense in a 45-6 Okemos (Mich.).

– Had two receptions for 74 yards and one touchdown in a 31-19 victory over Powder Springs (Ga.) Hillgrove.

– Returned the opening kickoff 85 yards for a touchdown and caught four passes for 51 yards in a 45-7 victory over Robertsdale (Ala.).

– Caught 12 passes for 251 yards and two touchdowns on offense and recorded a sack on defense in a 35-33 victory over San Diego (Calif.) Cathedral Catholic.

– Caught nine passes for 109 yards and two touchdowns in the victory over Servite.

– Caught seven passes for 41 yards, returned one kickoff for 57 yards, and he also compiled 10 tackles and one pass deflection in a 20-17 victory over Harbor City (Calif.) Narbonne.

– Rushed for 396 yards and three touchdowns on 22 carries, while also making two receptions for 94 yards and two touchdowns in a 47-22 victory over Milpitas (Calif.).

– On offense Johnson rushed for 123 yards and one touchdown on 12 carries, while also catching one pass for nine yards, and he also came up with an interception on defense in a 18-14 victory over Eagle Rock (Calif.).

– In the victory over Eagle Rock, Lewis caught three passes for 49 yards and one touchdown, had one carry for 14 yards, and made 4 tackles with one sack and one interception.

– Caught six passes for 137 yards and one touchdown in the victory over Bingham.

– Caught four passes for 49 yards in the victory over Eagle Rock.