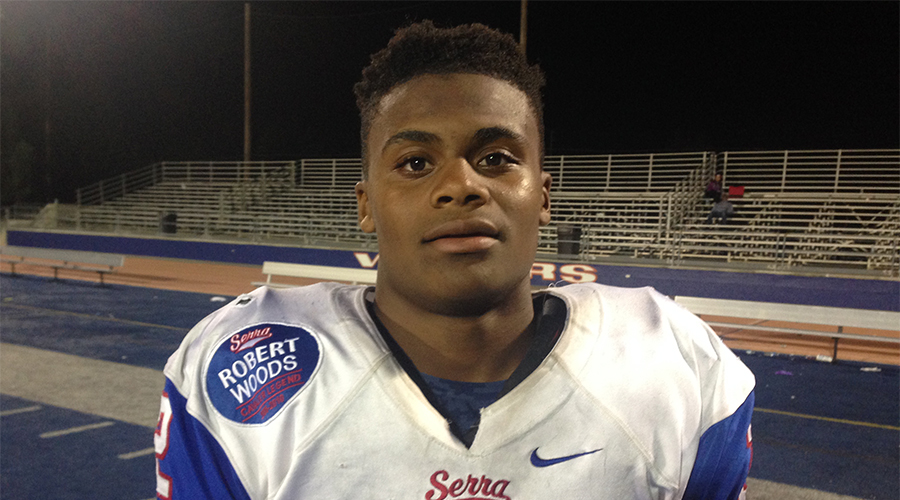 It was a rough outing for Gardena (Calif.) Serra this past Thursday as the Cavaliers went down in defeat to West Hills (Calif.) Chaminade 37-32, dropping the SoCal powerhouse to an uncharacteristic record of 2-3 on the season.

A number of Serra players still managed to shine, however, posting some impressive numbers in the loss. That was particularly the case with Class of 2018 wide receiver John Jackson, who racked up a career-high 17 receptions for 123 yards. Despite his outstanding individual performance, following the contest the only thing that was on the senior leader’s mind was getting the Cavaliers back on track – starting this Friday against Loyola.

“We were able to come out and put our best foot forward, but unfortunately it didn’t go our way,” Jackson said. “We just have to keep playing. We’ve forced ourselves to have to win every game, it’s just what we have to do. Us seniors have to lead, and I think we can do it. Obviously, I want to finish my senior season with a ring. Whatever we have to do to turn things around, that’s what has to be done.”

On the recruiting front, Jackson is in near-constant contact with the likes of Illinois, Oregon, Tennessee, UCLA, USC and Wyoming among others, and he’s already set up an official visit with the Fighting Illini.

As for his remaining official visits, Jackson already has two other schools in mind.

“Probably Tennessee and Oregon, those are the top two out-of-state,” Jackson said. “I don’t want to take officials to the in-state schools because I’m around them so much.”

But just because the Trojans are unlikely to receive an official visit, that doesn’t mean that they aren’t in the thick of this race.

With Jackson’s father a prolific wide receiver for the Trojans in the late 1980’s, and his grandfather a former assistant coach at USC, he certainly has some significant family ties to the program.

On top of that, Jackson also hails from a high school that has fed a number of key contributors into the Trojans program in recent years. One of those players, Deontay Burnett, has taken on a big brother-type role with Jackson.

“The big thing is, I’ve watched Deontay, he’s obviously been like a mentor, and he’s been like, ‘you know, you can play like me.’” said the 6-foot-2, 190-pound Jackson. “And looking at how many touches he’s getting, he’s obviously a big part of their offense, and they also utilize him in the slot, which is where Serra really started utilizing me, so that’s definitely something that sticks out to me.”

Another factor that has Jackson looking at the Trojans is the USC coaching staff.

“I’m probably in contact most with Tee Martin,” Jackson said. “We talk maybe once a week. And also a little bit Clay Helton, I see him a lot. You know, he’s always around Serra. I’ll see him at some of the games. So, obviously I’m close with him. He’s always in my ear, ‘I hope you had a great time. Great game.’ You know, always pointing out things I that I can maybe do better. It’s really good having him around.”

As far as the role that Helton and Martin envision for Jackson, it’s similar to the one that Burnett currently fills for the Trojans.

“A lot from the slot,” said Jackson, who took in the Trojans’ matchups with Stanford as well Texas in the Coliseum this season. “They definitely like how I can go over the middle and make tough catches. That’s always been a big thing that I’ve tried to emphasize in my game. Obviously, speed was a big thing that I tried to get down in the offseason, and hopefully I can just keep getting faster and stronger.”

Of course, most might assume that Jackson is a virtual lock to USC given his family history, but he emphasizes that most definitely is not the case. Still wide open to all comers, Jackson is quick to point out that there is actually someone else at home reminding him not to forget about the school across town.

“My dad just said, ‘go wherever makes you feel like home and where you get the best opportunity to play,’ because that’s another thing that I’m taking into consideration,” Jackson said. “Obviously he’s a USC alum, but my mom is also a UCLA alum, so she’s always pushing me to go to UCLA. It will be interesting to see what happens.”

Jackson plans to attend one or two more USC games in the Coliseum this year. He’s unsure when he will make his final decision. It could come as soon as the end of this football season, or as late as signing day.

Trojans offer a trio in Washington

USC offered three talented recruits from Sammamish (Wash.) Eastside Catholic late last week in Class of 2020 stars Ayden Hector and D’Andre Rogers, as well as a promising Class of 2021 standout J.T. Tuimoloau. USC is getting a head start on Hector, a cornerback, and Rogers, tight end, by becoming the first school to extend an offer their way. The youngster of the group, Tuimoloau, is an outside linebacker who also currently holds an offer from Washington.

“I thought USC battled all game long. They showed toughness in all four quarters, and I’m looking forward to next week’s game.”

Senior WR John Jackson III, son of USC Alumni John Jackson Jr, is one of the best overall athletes in the 2018 class (hit .574 in baseball last spring). Although Serra, now (2-3) fell to Chaminade by a score of 37-32 on Friday night, Jackson was the star of the game while showing his speed, strong hands, and playmaking abilities. Jackson totaled 17 catches, including pulling in a 20-yard seam route on Serra’s first play from scrimmage. Jackson can make plays from anywhere on the field, including the backfield, wide out, and special teams, but most of his production in this game came from the slot while using his size as a first option for a quarterback making his first start at the varsity level. After making the switch from quarterback to receiver, Jackson has shown why he is a top caliber recruit, with the ability to shine at the next level as well. – Kyle Paskwietz

– Compiled three tackles with two tackles-for-loss including one sack, five quarterback hurries, three pass deflections, and he recovered a fumble and returned it 36 yards for a touchdown in a 42-7 victory over Bakersfield (Calif.) Liberty.

– Had four tackles (2 solo), 1.5 tackles-for-loss and one quarterback hurry in a 63-0 victory over Las Vegas (Nev.) Spring Valley.

– Caught four passes for 143 yards and one touchdown in a 56-0 victory over Long Beach (Calif.) Wilson.

– Had six receptions for 81 yards, and four tackles (3 solo) in the loss to Chaminade.

– Caught eight passes for 177 yards and four touchdowns in a 55-6 victory over North Medford (Ore.).

– Had one reception for 16 yards, three tackles (all solo) with three tackles-for-loss including two sacks, one pass deflection, and he also blocked a punt in a 69-0 victory over Fontana (Calif.) Miller.

– Had 16 tackles (6 solo) with three tackles-for-loss including two sacks in the loss to Chaminade.

– Caught four passes for 48 yards in the loss to Chaminade.

– Had four tackles (1 solo) with one tackle-for-loss in a 44-7 victory over Las Vegas (Nev.) Centennial.

– Caught six passes for 80 yards and one touchdown in a 35-7 victory over Palmdale (Calif.) Highland.

– Caught seven passes for 143 yards and three touchdowns in a 65-63 victory over Valencia (Calif.).

– Caught one pass for 16 yards, had four tackles, three sacks and two forced fumbles in the victory over Liberty.

– Had three tackles (2 solo) in the loss to Chaminade.

– Had 10 receptions for 215 yards and three touchdowns in the victory over Valencia.