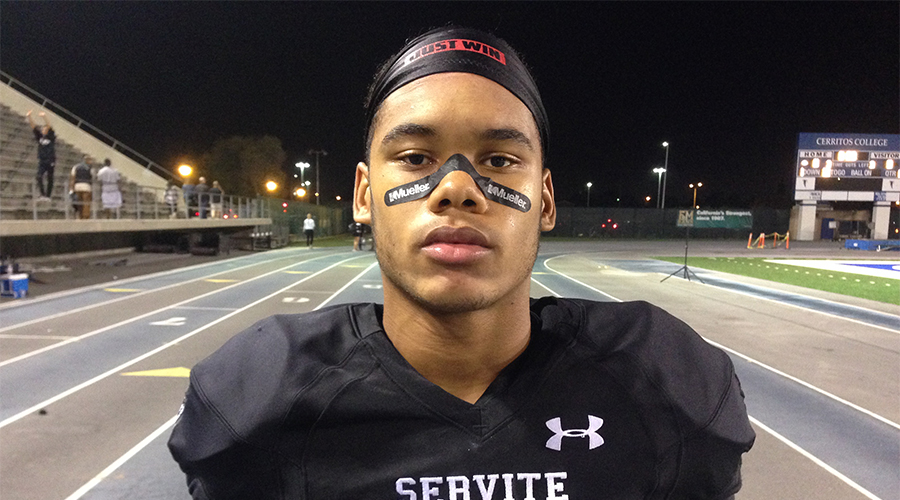 In a highly anticipated matchup between a pair of 6-2 Trinity League powers in Anaheim (Calif.) Servite and Bellflower (Calif.) St. John Bosco, Class of 2018 safety Julius Irvin and his Friar teammates hung tough with the Braves throughout the first half on Friday night, but Bosco was just too much down the stretch, running away with a 42-17 victory at Cerritos College.

Even in defeat, however, Irvin still stood out as he showcased some outstanding cover skills while amassing four tackles including one for a loss, three pass deflections and one forced fumble on the defensive side of the ball, and he also added two receptions for 72 yards on offense.

“Unfortunately, we lost the game, but I really am confident in my guys,” said Irvin, the veteran leader of the Servite defense. “They came out there and battled. We had a handful of starters that were injured for this game. You know, in the first half we were competing. In the second half, it kind of slipped away.”

Irvin, who stands 6-foot-2 and 182 pounds, announced a top 5 (in no order) of Michigan, Notre Dame, USC, Utah and Washington late this past summer, and with the process inching closer and closer to its conclusion, he maintains no change in that regard.

“I still have that same top 5,” Irvin said. “I’m planning to end it before the season. So, sometime in December there should be a commitment out of me.”

Irvin has already taken official visits to Michigan, Notre Dame and Washington, and he enjoyed each trip. He has yet to take an official to USC or Utah just yet, but says that the Trojans are likely to land his last visit sometime in December, just prior to his announcement. Utah is also potentially in line to get an official visit prior to that if a date opens up.

The fact that Trojans head coach Clay Helton will likely get the opportunity to make the final pitch to Irvin could bode well for USC, which Irvin says is in the mix for a variety of reasons.

“SC, they’re always battling for the top spot, and it’s a very competitive school, and I like that about it,” Irvin said. “Nothing is handed to you at SC. And I really like their rich football tradition, as well as academic tradition, so that really stands out to me. And it’s also in California. It’s the only California school that I’m interested in.”

Of course, Irvin’s official visit won’t mark the first time that he’s been up to USC. In fact, he was just on campus back on the weekend of Oct. 14.

“I was on campus when they played Utah,” Irvin said. “I actually went there on game day, and then Sunday I went up for an unofficial. I had never seen the campus, so that was just an experience that I wanted – to see the campus first-hand, how the students move around, and the facilities, the dorms and stuff like that.”

Not only did the unofficial leave a positive impression on Irvin, but also on some family members who made the visit with him.

“My mom and cousin were there too,” said Irvin, who hopes to study film and television or business marketing in college. “They loved it. It’s close to home, and they want me to stay close to home. But they really don’t care where I choose. They said that all of the schools are great options for me. They aren’t really biased toward any of the schools, but they really like USC.”

Irvin has been in near-constant contact with the USC coaching staff throughout this fall, particularly defensive backs coach Ronnie Bradford.

“I would say that we talk on the phone about weekly,” Irvin said. “Then he texts me before my games, and he texts me after the games to see how it went. I talk to Clay Helton too. We text about weekly also. I’m definitely in touch with the coaches.”

One thing that the Trojans staff has told Irvin that they like about him is his versatility. Primarily a safety for the Friars, he spent much of the game against St. John Bosco lined up in man-to-man coverage on the slot receiver.

“Coach Bradford likes me anywhere,” Irvin said. “He likes me as a long, rangy corner, so he really likes me at corner, but he said that he could plug me in anywhere. He feels confident that I could really play anywhere in the defensive backfield.”

In the coming days Irvin will begin to take an even closer glance at each school in his top 5 as he attempts to zero in on a decision, and he has some specific factors in mind that he’s going to really be looking for.

“Just that home feeling, feeling like I can be at a place for four to five years,” Irvin said. “Being comfortable at the place. And then also the academic side, and the football side. I want to go to a place where I’m set after football. A place that’s going to carry the great connections for me to pursue my goals after football.”

Irvin has plans to be back at USC when the Trojans play UCLA on Nov. 18.

– Prized Class of 2018 defensive tackle prospect Trevor Trout (St. Louis, Mo./Chaminade) announced on Monday that he will take an official visit to USC on the weekend of Nov. 18. He released a top 5 on Sunday that included the Trojans as well as Alabama, Georgia, Miami and UCLA.

– Had four tackles including one for a loss in a 43-0 victory over Las Vegas (Nev.) Sierra Vista.

– Had four catches for 90 yards and three touchdowns in a 64-0 victory over Lakewood (Calif.).

– Had seven carries for 105 yards and one touchdown in a 50-0 victory over Washington (D.C.) Anacostia.

– Rushed for a 35-yard touchdown, and he also ran a kickoff back for a touchdown in the victory over Lakewood.

– Had seven receptions for 186 yards and three touchdowns in a 49-24 victory over Ontario (Calif.).

– Caught two passes for 71 yards and two touchdowns in the victory over Lakewood.

– Caught two passes for 61 yards and one touchdown in the victory over Crespi.

– Caught eight passes for 122 yards and three touchdowns in a 51-21 victory over Orange (Calif.) Lutheran.

– Had five tackles (4 solo) including one for a loss and one quarterback hurry in the victory over Orange Lutheran.

– Had seven receptions for 160 yards and five touchdowns, and he also had two interceptions that he returned for a total of 98 yards and one touchdown in a 52-0 victory over Littlerock (Calif.).

– Completed 24 of 33 passes for 336 yards and five touchdowns, and he also rushed for 45 yards in the victory over Orange Lutheran.

– Had 16 carries for 104 yards and one touchdown, caught three passes for 30 yards, returned a fumble 11 yards for a touchdown, and he also rushed for a two-point conversion in a 34-27 loss to Newhall (Calif.) Hart.

– Caught two passes for 61 yards and one touchdown in a 56-9 victory over La Verne (Calif.) Damien.

– Had eight carries for 178 yards and two touchdowns in the victory over Damien.

– Had two tackles including one for a loss, and one QB hurry in the victory over Orange Lutheran.

– Had five tackles on offense, and he caught one pass for 21 yards on offense in a 38-0 victory over Ventura (Calif.) St. Bonaventure.

– Had a 43-yard interception return for a touchdown in the victory over Crespi.

– Completed 22 of 35 passes for 320 yards and four touchdowns, and he also rushed for 26 yards in the victory over Servite.

– Completed 14 of 17 passes for 328 yards and five touchdowns, and he also rushed for a touchdown in a 46-0 victory over Los Angeles (Calif.) Salesian.