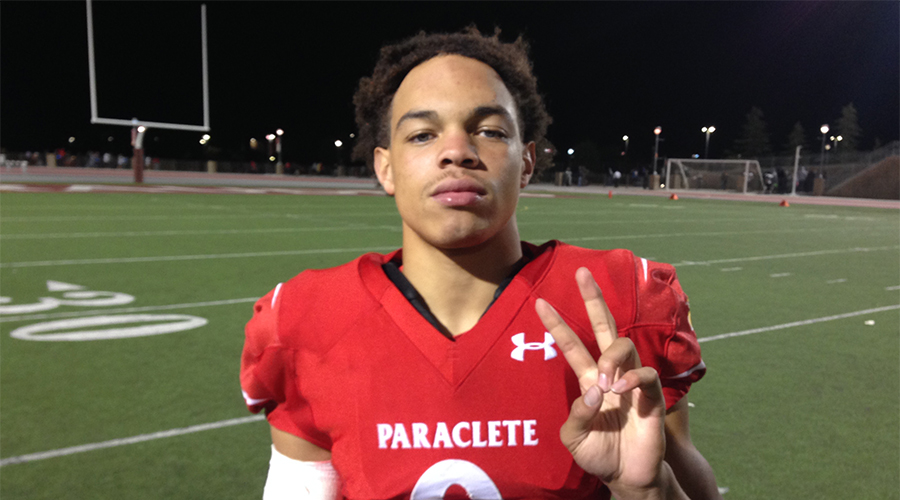 Following an uncharacteristic performance against Ridgecrest (Calif.) Burroughs that Andre Hunt called the worst of his career, the Class of 2018 USC commit made a conscious effort to refocus himself in practice last week, and it’s safe to say that the hard work paid off.

The standout receiver looked better than ever on Friday night, hauling in four touchdown passes – all in the second quarter – as Lancaster (Calif.) Paraclete cruised to a 63-7 victory over Tehachapi (Calif.) to improve to 4-1 on the season.

“I went out to make a statement that I wasn’t going to let that happen again,” Hunt said. “I just thought if I really want to go to USC, and if I really want to be the top dude, I have to set everything else aside and come out and play. This is just the start of me coming back, me being healthy, and me focusing on the game more.”

Speaking of USC, Hunt says that he considers himself a solid commit to the Trojans.

A big reason for Hunt’s high comfort-level with the Trojans is the coaching staff, whom he’s remained in constant contact with – particularly USC offensive coordinator and wide receivers coach Tee Martin.

“I talk to Coach Tee every day,” Hunt said. “I also talk to Eric Ziskin, he hits me up all the time, and I talk to Coach [Clay] Helton maybe every week. I have a great relationship with those guys. I’ll ask them for advice, and they’ll help me out.”

Being recruited to line up both in the slot as well as on the outside by the Trojans, the 6-foot, 180-pound Hunt is encouraged by the way that Martin and the rest of the staff have developed wide receiver talent during their time on campus.

“You know, I want to be the best receiver, and I think Tee Martin and Coach Helton can make me be the best receiver,” Hunt said. “Deontay Burnett, he wasn’t really highly recruited, but he’s the top receiver right now. So, I think I can go in there and make a big impact like him, and they’ll make me a good receiver.”

And it isn’t just Burnett who has impressed Hunt with his play on the field this season. With a close eye focused on the offense, he likes what he’s seen.

“Oh my goodness, they have a lot of firepower,” Hunt said. “Burnett, Tyler Vaughns…they have a lot of good receivers. And then their running backs are phenomenal. The freshman, Stephen Carr, he’s great. He moves his feet really well. And Ronald Jones, he’s exceptional. They’re very good. Sam Darnold, he’s hands down one of the best quarterbacks in college.”

Hunt was able to get an up-close look at the Trojans in action when he took in USC’s 42-24 victory over Stanford earlier this season. Leaving just as big of an impact on him as the result was the electric atmosphere in the Coliseum that night.

“There were a lot of people there,” Hunt said. “When you watch it on TV it’s not really the same. You don’t really hear the crowd and stuff like that, but when I was there it was really live. Everybody was cool, and I saw a lot of other players there. Me and De’Gabriel Floyd, we were in the locker room, it was hyped after that game. I looked at him and I was like, ‘Yeah, we’ve got to come here.’”

Despite the strength of his pledge, however, Hunt does plan to take an official visit or two elsewhere in the coming months.

“You know, this is a once in a lifetime opportunity, and I just want to take advantage of it,” Hunt said. “I’m never going to be able to do this again. And I’m 100 percent committed, but anything is possible.”

Right now, Oregon State is one likely destination for Hunt, and up until recently, Washington State was another. But the Cougars staff told him that he would have to visit their campus following the season, and with Hunt on pace to potentially graduate high school in December, it’s now unlikely that he will make that trip to Pullman.

Hunt will take his official visit to USC on the weekend of the UCLA game on Nov. 18. He also hopes to attend USC’s next home game on Oct. 7 when the Trojans face Oregon State.

– Talented athlete Talanoa Hufanga (Corvallis, Ore./Crescent Valley) released his top 6 last week, and USC was in this one as well along with Michigan, Nebraska, Oregon, UCLA and Utah.

1.CB Isaac Taylor-Stuart – nothing has changed here . . . a coveted 6’2 cover cornerback out of San Diego

2.LB Solomon Tuliaupupu – one of the top inside LB prospects in the country

3.WR Amon–Ra St. Brown – advanced WR whose interest in SC continues, and it doesn’t hurt his HS QB is a Trojan verbal commit

4. OT Jackson Carman – unlike the Spring, national analysts now admit SC is firmly in the recruiting battle for the Ohio blue chipper

5. RB James Cook – a smooth runner with elite vision out of Florida who also happens to be current Trojan Jamel Cook’s cousin

7. WR Devon Williams – moves up based upon consistent dominance on camp circuit

8. OT Penei Sewell – the consensus is that the big OT prospect out of Utah has SC among his top 3 choices

11. S/CB Aashari Crosswell – natural athlete with ball skills who could play CB or Safety in college

12. WR Jalen Hall – making an impact as a go to receiver at his new school LB Poly

15. DE Jeremiah Martin – a great athlete with huge potential at 6’5, 245lbs. He is also a very good basketball player at Cajon HS

Ford stood out for Orange Lutheran with two touchdowns in a 34-21 victory over Heritage, while showing everything in his toolbox to prove himself at the next level. Ford showed off his tremendous route running skills on a skinny post route up the seam for 25 yards and a first down on his first reception of the game. He also showed great speed and the ability to make plays, including leaping ability as shown when he leapt over a defender to reel in a touchdown throw from Tyler Hilinski in the second quarter. Ford continuously proves to have strong hands, leadership qualities, and much more. – Kyle Paskwietz

– Caught five passes for 55 yards and two touchdowns, and he also had three tackles in a 38-20 victory over Mission Hills (Calif.) Bishop Alemany.

– Had a 10-yard touchdown reception in the victory over Millikan.

– Caught eight passes for 87 yards in the victory over Bishop Alemany.

– Had nine tackles (2 solo), one sack and one interception in the victory over Bishop Alemany.

– Caught five passes for 62 yards in the victory over Bishop Alemany.

– Threw five touchdown passes in the victory over St. Mary’s.

– Caught seven passes for 134 yards and two touchdowns in a 34-21 victory over Romoland (Calif.) Heritage.

– Caught a six-yard touchdown pass, had nine tackles (5 solo) including one tackle-for-loss in the loss to Murrieta Valley.

– Caught two passes for 21 yards, compiled two tackles, had one interception that he returned 55 yards for a touchdown, 1 blocked field goal and one fumble recovery for a touchdown in the victory over Bishop Alemany.

– Had nine tackles (3 solo) and one pass deflection in the victory over Bishop Alemany.

– Completed 5 of 8 passes for 83 yards and one touchdown, and rallied the Braves from a 10-point deficit in the fourth quarter to a 21-17 victory over Washington (D.C.) St. John’s.

– Caught three passes for 58 yards and one touchdown in a 35-8 victory over Woodland Hills (Calif.) El Camino Real.