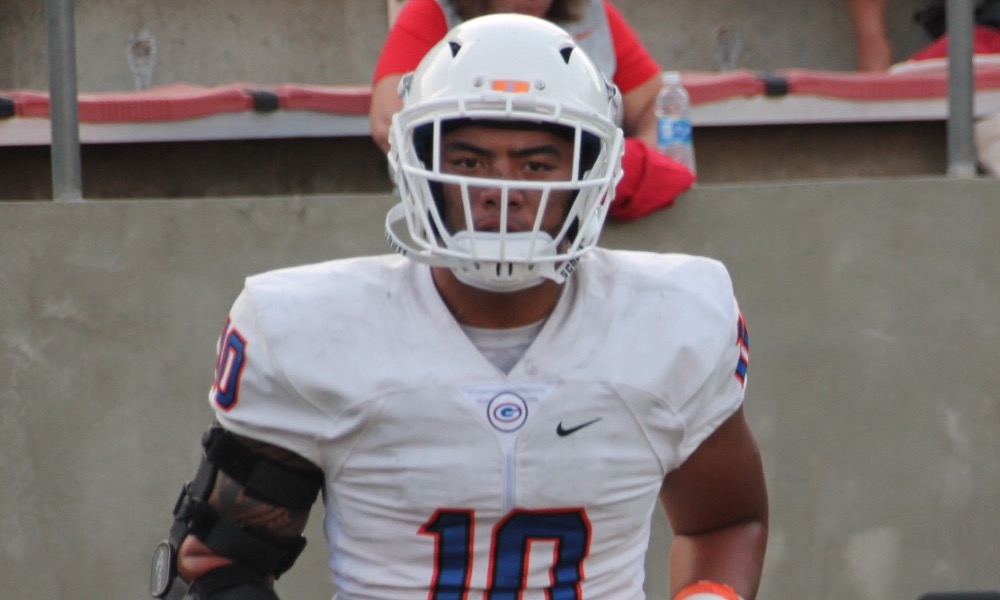 Class of 2018 USC linebacker-commit Palaie Gaoteote and his Las Vegas (Calif.) Bishop Gorman teammates were forced to deal with some unfamiliar feelings this past Friday night as the Gaels fell to Santa Ana (Calif.) Mater Dei 35-21 in one of the most highly anticipated match-ups of the young high school football season.

With Bishop Gorman riding a 55-game winning streak heading into the game, the Gael players – who had never lost a contest together while playing at the Nevada powerhouse – understandably took the defeat hard. As a senior leader, however, Gaoteote wasn’t about to let it keep them down for too long. In fact, less than 10 minutes after the game had ended, he was already eager to get back to work.

“You learn more when you lose, so we’re going to take this and go home and work harder,” Gaoteote said. “We’ve still got a tough schedule ahead of us. We’re going to go home, just hit the books, hit the weight room, hit everything harder.”

With fellow USC pledge and elite Class of 2019 quarterback JT Daniels dishing out pass-after-pass before the Bishop Gorman defense had any kind of chance to pressure him, Gaoteote and the rest of the Gaels front-seven weren’t able to have the kind of impact that they normally do in a game. The 6-foot-2, 220-pounder still managed to stand out at times, however, as he showcased the unique blend of athleticism, physicality and high football IQ that has helped establish him as one of the most coveted prospects in his class.

Able to write his own ticket to virtually every program around, Gaoteote brought an early end to the process this past February when he committed to USC, due in large part to his relationship with Head Coach Clay Helton, who was in attendance at his game on Friday night along with Trojans linebackers coach Johnny Nansen.

“Honestly, it was Coach Helton,” Gaoteote said. “He’s a genuine dude. I love the fact that he preached faith, family and football. Those are three big concepts in my life, so that’s probably the biggest thing that sold me.”

In near-constant contact with the USC coaching staff, his pledge is just as strong today as it was when he gave it.

“I talk to Coach Nansen, Coach [Clancy] Pendergast and Coach Helton,” Gaoteote said. “I’m in contact with them like twice a week, so I call them often, or they tell me to call them. We have a great relationship.”

Gaoteote spends most of his time at outside linebacker for Bishop Gorman, but he will periodically line up inside, or even up at the line coming off the edge, and it’s that versatility that has the USC staff excited.

Across the field on Friday night was another star Class of 2018 linebacker in Solomon Tuliaupupu, a player whom Gaoteote has gotten to know in recent months, and whom he shares a common Polynesian background with. Gaoteote says that he hasn’t been shy about letting the uncommitted Tuliaupupu know that he wants him to join him at USC.

“It’s a dream, the Uce crew,” Gaoteote said. “That would be great if both of us were in the same backfield. We talk about it all the time. I snapchat him about it, text him about it, we’re always talking about that.”

Despite the strength of his commitment, Gaoteote says that top-notch programs like Ohio State, UCLA, Georgia, Clemson and Oregon continue to pursue him, and that he’s likely to take all five of his official visits.

“I might take some other trips, so me and my family can just kind of relax and see the world,” Gaoteote said. “It would be kind of big for me. I’ve never been anywhere but Hawaii, Nevada and California. I’ve never been across the country, and so that would probably be the biggest thing for me.”

In addition to USC, Gaoteote is interested in taking official visits to Alabama, Ohio State, Oregon and UCLA at this point.

He also hopes to take in some Trojans games in the Coliseum this fall, although he was unable to make this past weekend’s game against Western Michigan.

In a head-to-head match-up with Class of 2018 UCLA quarterback commit Dorian Thompson-Robinson, it was Daniels, a Class of 2019 Trojans commit who stole the show in the Mater Dei-Bishop Gorman clash.

Showing tremendous poise for a junior, not to mention his trademark rocket for an arm, the elite signal-caller completed 19 of 32 passes for 313 yards and two touchdowns, and he also had a nice 16-yard gain on the ground in the Monarchs victory.

Having committed to USC this past July, Daniels is a solid pledge with no plans to officially visit any other programs.

With a number of teams playing on Saturday, there weren’t a ton of prospects who took in the Trojans’ victory over Western Michigan in the Coliseum, but here are a few who did make it:

* RB Mychale Salahuddin (Washington, D.C./Woodson) – USC commit
– Had nine carries for 115 yards and one touchdown in a 43-12 victory over Haverford (Pa.) School.

* S Julius Irvin (Anaheim, Calif./Servite)
– Had Five tackles (4 solo) and one interception in a 38-28 victory over American Fork (Utah).

* CB Isaac Taylor-Stuart (La Mesa, Calif./Helix)
– Caught two passes for 16 yards, and he also came with an interception in the loss to Paraclete.

* ATH Bru McCoy (Santa Ana, Calif./Mater Dei)
– Had six receptions for 143 yards, and he also made two tackles in the victory over Bishop Gorman.