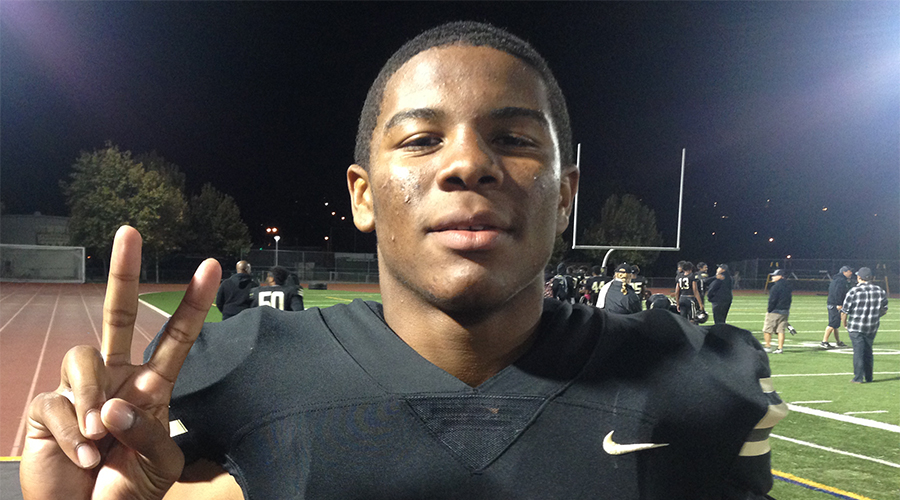 It’s been an up-and-down season for Class of 2019 athlete De’Gabriel Floyd and his Santa Clarita (Calif.) Golden Valley team. With the star USC pledge slowed by an early-season knee injury, the Grizzlies entered this past Friday night’s clash with Santa Clarita (Calif) Canyon with a 3-4 record. More than just that, they were coming off a crushing 48-7 loss to a strong Valencia (Calif.) team.

With Floyd appearing to be back to close to full-strength, however, a new-look Golden Valley squad came out and dominated the Cowboys from the get-go, cruising to a 38-0 victory in a key Foothill league contest to keep the team’s playoff hopes alive.

“It’s real big because after Valencia, our self-esteem didn’t really go down, but we just saw a lot of different things that we could improve on, and in this game we did that,” Floyd said. “The way that Valencia pounded and kind of pushed through us in the second half kind of showed that we need to put some more dog in our heart, so went through practice and had a great week, and this was the result.”

Floyd, who transferred to Golden Valley from Los Angeles (Calif.) Hawkins last spring, certainly did more than his part as he rushed for a 20-yard touchdown, passed for a 70-yard touchdown and caught two passes for 28 yards on offense, and he also compiled eight stops on defense. A jack-of-all-trades for the Grizzlies, the 6-foot-2, 220-pound Floyd lined up at quarterback, wide receiver and safety on Friday, and he’s seen time all over the field this season.

“I’m thrown around everywhere,” Floyd said. “I go to quarterback, to running back, to receiver, I go to tight end and block, I start at free safety on defense, I play d-end sometimes, linebacker, corner…it’s a whole different deal than when I was at Hawkins, but I’m adjusting well and getting comfortable.”

It was at Hawkins that Floyd first burst onto the recruiting scene as just a freshman, and he already had an extremely impressive offer sheet when he decided to make an early pledge to the Trojans last April. And while he remains committed to Clay Helton and staff today, he admitted that the recruiting process isn’t completely over for him just yet.

“I’m still open to a degree,” Floyd said. “I’m maybe 80 percent with SC. After a couple games that I went to this season, every time I went it solidified how I felt, like, ‘I really feel like I should go here.’ But sometimes other schools come in and give me other looks and make me think about other things school-wise, plan-wise, environment-wise…everything.”

Florida, Michigan, UCLA, Texas and Washington State are just some of the other schools that continue to pursue Floyd, and he hopes to check out some of those suitors next school year.

“I’m going to take all of my officials,” Floyd said. “I’m not completely sure where yet. Nothing is set in stone, but I would want to take one to UCLA, I’d like to go down to Georgia and see what the school is like, Texas, and that’s pretty much it right now.”

At this point in time Floyd is unsure if he will take an official visit to USC down the line, but that isn’t because of a change of heart or any lack of interest. A frequent visitor to Trojans practices and camps while he was down the street at Hawkins, he simply isn’t sure if it’s necessary. He’s also quick to point out that there are more than a few reasons why he remains a Trojans commit.

“It’s just the environment, the energy, the family feel – how comfortable I feel around the coaches and around the players,” said Floyd, who is being recruited to line up at outside or inside linebacker for the Trojans. “I’ve developed great relationships with even those that I didn’t play with like Joseph [Lewis] and Greg [Johnson]. I’ve made relationships with Levi Jones, Stephen Carr and a few other guys. I love Coach Helton. He’s a real cool dude. I just feel like it would be a good place for me to go and excel.”

And it certainly appears as though the USC coaching staff is doing their best to ensure that he stays in the fold as well.

Floyd hopes to be on hand at the Coliseum this season to see USC in action again, although he’s unsure which specific games he’s going to be able to make it to.

USC already has one tight end from the Class of 2018 commit in the fold in Long Beach (Calif.) Poly’s Camren McDonald, but with the loss of Cary Angeline from the roster this season, the Trojans staff has started to show renewed interest in some prospects at the position in recent weeks, particularly Michael Ezeike out of Ontario (Calif.) Colony.

– Caught a seven-yard touchdown pass, and he racked up nine tackles (6 solo) including five for a loss in a 55-0 victory over Las Vegas (Nev.) Durango.

– Caught two passes for 29 yards on offense, and he had five tackles and six pass deflections on defense in a 56-3 victory over Santa Ana (Calif.) Foothill.

– Had three tackles and he forced one fumble in a 49-6 victory over Pasadena (Calif.) La Salle.

– Caught one pass for a 76-yard touchdown, and he had nine tackles (8 solo) in the victory over Orange Lutheran.

– Caught four passes for 51 yards and one touchdown, and he also returned a punt 89 yards for a touchdown in a 45-3 victory over San Juan Capistrano (Calif.) JSerra.

– Had three tackles (2 solo) and two QB hurries in the victory over JSerra.

– Had six receptions for 102 yards, he caught a two-point conversion, and he also had one interception on defense in a 49-28 victory over Palmdale (Calif.) Knight.

– Rushed for 96 yards and one touchdown on nine carries in a 48-7 victory over Etiwanda (Calif.).

– Had six tackles (5 solo) including two for a loss and one sack in the victory over JSerra.

– Caught two passes for 18 yards, and he had four tackles (3 solo) in the victory over JSerra.

– Had seven tackles (5 solo) including two for a loss, five QB hurries and one blocked field goal in a 23-21 victory over Camarillo.

– Had two receptions for 50 yards, four tackles (2 solo), one interception that he returned for a 34-yard touchdown, and he also returned a kickoff 79 yards in the loss to Bishop Amat.

– Had 11 tackles including one for a loss in the loss to Bishop Amat.

– Completed 23 of 38 passes for 405 yards and two touchdowns with one interception in the victory over Santa Margarita.

– Caught seven passes for 98 yards and one TD in the victory over Newbury Park.

– Completed 13 of 19 passes for 233 yards and four touchdowns in the victory over La Salle.