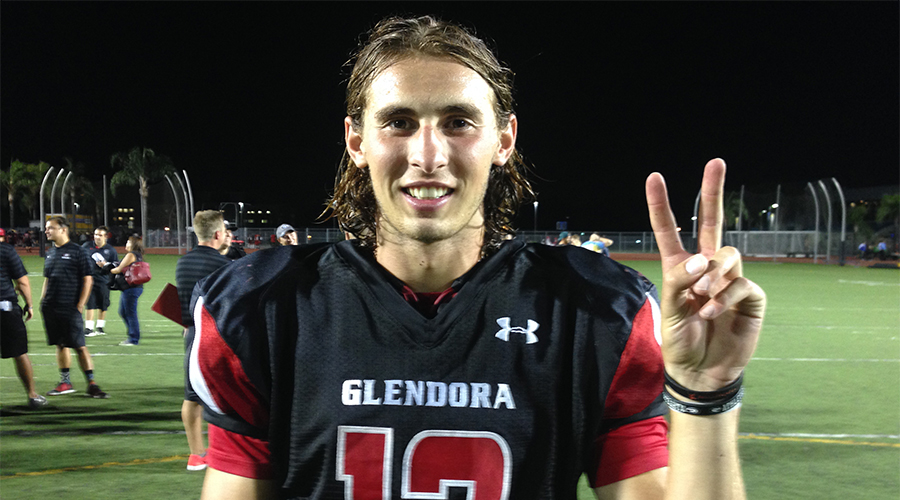 In an early-season clash of unbeatens, USC commit Matt Fink put on an impressive performance this past Friday night, guiding Glendora (Calif.) to a 42-28 victory over Hacienda Heights (Calif.) Los Altos. The ESPN 300 dual-threat quarterback showcased his full array of talents, passing for 298 yards and three touchdowns, while also rushing for 124 yards and one touchdown.

Following the win, however, Fink was quick to deflect all of the attention away from his individual accomplishments.

“I can’t say it was just me,” Fink said. “Our whole team came together and played as a unit. If you play as one team, and not just individual players, you’re going to win the football game.”

Reflecting that team-first mentality was the grit that he played with throughout the contest, and it was particularly evident in the way that he rushed the ball. Determined to gain every yard that he could, the 6-foot-3, 185-pound passer ran with physicality, and while he absorbed some big hits, he bounced back every time, including in the third quarter when he took a hard shot to the neck.

“It was kind of just a whiplash,” Fink said. “Right when the contact happened it kind of hurt, but I just had to shake it off, and get my focus back on track. They told the second guy to warm up, and I said, ‘No, I’m staying in.’”

Following the victory, Fink, who gave a verbal pledge to USC this past May, left little doubt as to the strength of his commitment.

Fink was among those in attendance at USC’s 41-31 loss to Stanford this past Saturday, but it’s safe to say that the outcome of any one game won’t have an impact on him. In fact, after a busy summer in the classroom, Fink is scheduled to enroll early at USC shortly after he participates in the Under Armour All-America High School Football Game on Jan. 2.

“I’ve had this planned since the beginning of summer,” Fink said. “I talked to Coach [Clay] Helton and everybody up at USC, and they told me what I needed to do to get up there early. I took three summer school classes. It was a pain, but I got it done.”

It’s Helton, the Trojans offensive coordinator and quarterbacks coach, whom Fink has developed a strong relationship with.

“I’m usually in contact with Coach Helton, maybe four or five times a week,” Fink said. “He DMs me on Twitter, and I’ll call him, and we’ll have some conversations, and just keep in touch.”

One of 16 current verbal commits for USC from the Class of 2016, Fink is excited about the recruiting haul that is being put together, particularly at the wide receiver spot where the Trojans have pledges from Josh Imatorbhebhe, Velus Jones, Michael Pittman, Trevon Sidney and Tyler Vaughns.

“My mind is blown with just how much talent is coming in,” Fink said. “All of the commits have a group message, and we all talk to each other. It’s really cool.”

Before the time comes to suit up in cardinal and gold, however, Fink has the rest of his senior campaign at Glendora. And with a big victory over a quality opponent under his team’s belt, he’s optimistic that they can continue their winning ways.

“This is definitely something we can build off of,” Fink said of the win over Los Altos, which improved Glendora’s record 3-0. “It was a good win for us. We’re going to get back in the film room tomorrow and we’re going to keep getting better.”

– ESPN 300 defensive tackle and USC pledge Keyshon Camp (Lakeland, Fla./Lake Gibson) took an official visit to Michigan this past weekend, but remains committed to the Trojans. He will take his official visit to USC on the weekend of Nov. 7.

– Class of 2016 cornerback Troy Warner (San Marcos, Calif./Mission Hills) committed to BYU last week. A former Oregon commit, he was thought also to be considering USC among a host of others, although the Trojans had yet to extend an offer.

– Had four receptions for 31 yards and one touchdown, while also making a game-clinching interception in a 28-24 victory over Lansdale (Pa.) North Penn.

– Passed for 298 yards and three touchdowns, while also rushing for 124 yards and one more touchdown in the victory over Los Altos.

– Caught five passes for 89 yards and one touchdown, and also had an 82-yard kickoff return in a 63-28 victory over Chino Hills (Calif.).

– Caught two passes for 18 yards and one touchdown on offense, and compiled three tackles and one sack on defense in a 41-3 victory over Orange (Calif.) Lutheran.

– Had five receptions for 151 yards and two touchdowns in a 52-13 loss to Las Vegas (Calif.) Bishop Gorman.

– Caught four passes for 127 yards and two touchdowns in a 49-0 victory over Mesa (Calif.) Westwood.

– Caught three passes for 61 yards and one touchdown in a 21-14 victory over Huntington Beach (Calif.) Edison.

– Had five tackles and two pass deflections in the victory over Long Beach Poly.

– Had two receptions for 41 yards, while also adding two sacks and one forced fumble on defense in the victory over Long Beach Poly.

– Rushed for 61 yards and two touchdowns on five carries in one quarter of play in a 46-6 victory over Lake Balboa (Calif.) Birmingham.