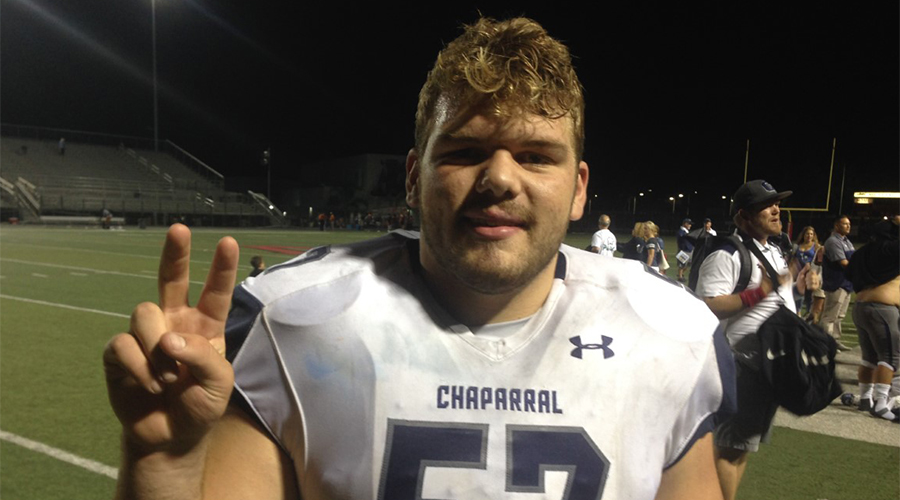 After suffering a blow-out loss to a talented Rancho Cucamonga (Calif.) squad in its opener, Temecula (Calif.) Chaparral has turned things around in a hurry. The Pumas have reeled off a pair of lopsided victories of their own in successive weeks, including a 56-0 drubbing of Perris (Calif.) Orange Vista this past Friday night, thanks in part to some impressive play up front by an offensive line group that is led by one of the nation’s most highly regarded center prospects in Class of 2018 USC commit Justin Dedich.

“Rancho Cucamonga was a great opponent. They are a Division I state-ranked team, and I think it was good for us to play them first because we got to see a lot of the bad things, and we responded well,” Dedich said. “We’ve still got more to fix, but we’ve come out ready to compete every game, and it’s an upward progression right now.”

Facing an Orange Vista defensive line unit that was clearly overmatched, Dedich didn’t allow himself to ease up as he continually drove the man in front of him back, and in many instances right down to the turf. That physicality and hard-nosed blocking style is a trademark of his play, and after shining at a number of camps, it’s a big reason why his stock soared this past offseason.

“I just love to flat-back people,” Dedich said. “It’s my joy. I don’t get the touchdowns, I get the flat-backs. And so, I go in with that mindset that I’m going to flat-back you, and that’s it.”

With offers from close to 30 programs, Dedich brought an early end to the recruiting process this past June when he committed to the Trojans shortly after attending a camp on campus. It’s a decision that he is completely at ease with.

“I am completely solid with USC,” said Dedich, who stands 6-foot-2 and 280 pounds. “It’s just the coaching staff and the school itself. I can see myself going there for four years, and I’ve been in southern California, and I want to be close to my family, and I felt like I fit in with Coach [Clay] Helton and Coach [Neil] Callaway, so it felt like the best fit.”

“We talk every week,” said Dedich, who is being targeted to play center, with the possibility of lining up at guard having also been discussed. “He asks me how my play is, and he asks me how I’m doing, and he tells me that he looks forward to me getting up there. We’re building a good relationship, and when I get up there I feel like it will continue.”

Having been to a number of Trojans practice sessions in the past, Dedich has seen Callaway in action first-hand. Possessing a booming voice and a no-nonsense coaching style, it’s safe to say that Dedich likes what he has seen from his future position coach.

“He’s old school,” Dedich said of Callaway. “I like that. It drives me to do better. If I do something wrong, and I get yelled at, I like that because I know that I have to correct it because I don’t want to get yelled at again. And so, I like the way that he coaches. It’s my kind of football.”

Dedich plans to take just one official visit, and that will be to USC. And in another sign of the strength of his pledge, he revealed that he is on pace to enroll early and arrive on campus this coming January.

“It’s kind of like a redshirt year without being a redshirt year,” Dedich said. “I’ll start three classes, I’ll start spring ball with the team, I’ll be able to mingle with the guys, get to know them, get to know the playbook, and I’ll have that extra step over the other freshmen. You see Andrew Vorhees and all of those freshmen playing. Hopefully I’ll be one of those guys next year.”

USC also currently holds a verbal pledge from offensive tackle prospect Liam Douglass (Studio City, Calif./Harvard-Westlake), and Dedich is hoping that eventually another pair of prized offensive linemen will join them in the Trojans’ recruiting class.

“Jackson Carman and Penei Sewell, I’ve been talking with them,” Dedich said. “I’m close friends with them, so I always hit them up like, ‘Hey, how are you doing?’ I’m not big, though, on saying, ‘hey, commit here.’ It’s like, ‘do what’s best for you, but know that if you come here we’ll be able to hang out.’”

Dedich was among those in attendance at the Coliseum this past weekend for USC’s 42-24 victory over Stanford, and he plans to be back for some more Trojans games in the near future.

The Trojans offered a pair of linebackers within the last week in Class of 2018 standout Brandon Kaho (Reno, Nev./Reno) and fast-rising Class of 2019 star Mase Funa (Santa Ana, Calif./Mater Dei).

With the Trojans already possessing four Class of 2018 linebacker commits in Bo Calvert (Westlake Village, Calif./Oaks Christian), Palaie Gaoteote (Las Vegas, Nev./Bishop Gorman), Kana’i Mauga (Waianae, Hawaii/Waianae) and Raymond Scott (Harbor City, Calif./Narbonne), and another one in their crosshairs in Solomon Tuliaupupu (Santa Ana, Calif./Mater Dei), the offer to Kaho is particularly interesting. Standing 6-3 and 235 pounds, he’s known as a big-time playmaker on the defensive side of the ball. He’s currently committed to BYU, but he’s still open to others with Alabama, Oregon, UCLA, Utah and Washington also involved.

Funa earned an offer from USC immediately following an eye-opening performance in Mater Dei’s 35-21 victory over Bishop Gorman – a game in which both Helton and Trojans linebackers coach Johnny Nansen were in attendance. BYU, Oklahoma, Utah and Washington have also offered the 6-3, 240-pounder.  Funa also took in the Trojans’ victory over Stanford in the Coliseum this past Saturday.

– Had six tackles (3 solo), one sack and five quarterback hurries in a 30-21 victory over Lancaster (Calif.) Paraclete.

– Had nine tackles (4 solo), one for a loss, and one QB hurry in a 24-20 loss to Miami (Fla.) Central. He also came up with a highlight-reel stick that you can see at the bottom of this page.

– Had 13 carries for 202 yards and two touchdowns in the victory over Bishop Gorman.

– Had one reception for 37 yards, compiled six tackles (4 solo) and two pass deflections, and he also returned three punts for 114 yards and one touchdown in a 52-14 victory over Eastvale (Calif.) Roosevelt.

– Had 10 receptions for 89 yards in the victory over Dorsey.

– Caught four passes for 69 yards and one touchdown, and he had three tackles (2 solo) and one QB hurry in a 49-46 loss to Murrieta (Calif.) Murrieta Valley.

– Compiled five tackles (3 solo), including one tackle-for-loss in the victory over Dorsey.

– Caught three passes for 26 yards and one touchdown in the victory over Dorsey.

– Completed 13 of 15 passes for 248 yards and three touchdowns, and he also ran for a 60-yard touchdown in the victory over La Mirada.

– Had six carries for 117 yards and one touchdown, and he caught four passes for 114 yards and two touchdowns in a 26-19 loss to La Crescenta (Calif.) Crescenta Valley.

– Had a five-yard touchdown reception, and he also came up with eight tackles (7 solo), three sacks and four quarterback hurries in the victory over Paraclete.

– Caught one pass for 14 yards, and he also had two solo tackles in the victory over Dorsey.

– Compiled five tackles (2 solo), including one tackle-for-loss in the victory over Dorsey.

– Completed 25 of 39 passes for 330 yards and six touchdowns, and he also rushed for a five-yard touchdown in a 63-0 victory over Lynwood (Calif.).

Randy Taylor, who has 35 years experience in college football recruiting, gives his thoughts on watching tape of a player showing up an opponent