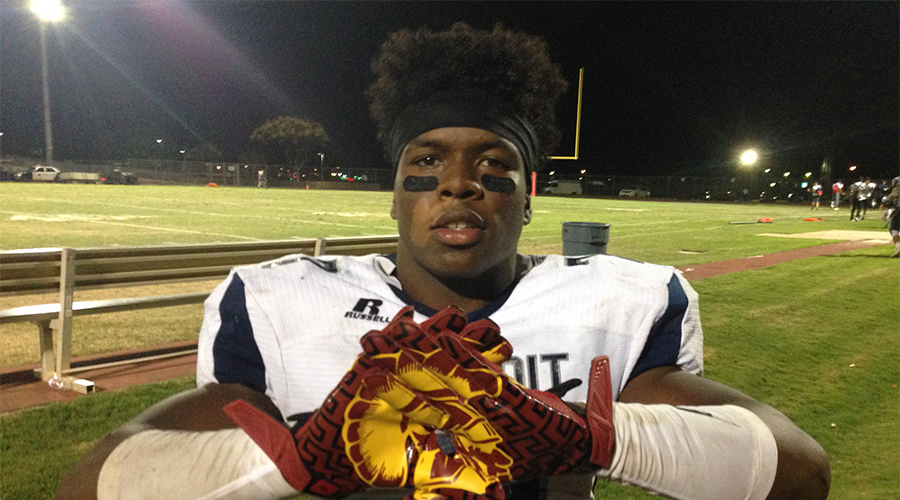 In a battle of Inland Empire unbeatens, Fontana (Calif.) Summit took down Riverside (Calif.) Norte Vista 35-21 this past Thursday night, thanks in part to strong second-half performance by USC-bound running back Stephen Carr.

With the game tied 7-7 after two quarters, Summit leaned on Carr down the stretch, and the Class of 2017 standout responded by racking up 89 of his 106 total rushing yards to go along with one touchdown, helping the Skyhawks improve to 5-0 on the season.

“I love pounding it, I love getting the ball, and it’s eventually going to lead to a touchdown,” said Carr, who stands 6-foot tall and 200 pounds. “That’s really how our offense goes. We’re a passing and running team, so after awhile, in the third and fourth quarter, we just run the ball at them and get it popping, because the other team really can’t stop it.”

The No. 56 overall ranked prospect in the ESPN Junior 300, Carr gave a verbal pledge to the Trojans in March of his sophomore year, and he’s been a regular visitor on campus ever since.

“I’m a solid commit,” Carr said. “I love the school. Every time I go up there I get so much love. I talk with Coach [Johnny] Nansen all the time, and I hit Coach [Peter] Sirmon up too. We always have a fun time talking. They’re my coaches, but we make sure that we keep a good relationship. Every time I go up there I hang out with them and hang out with some of the players. It’s just a great atmosphere.”

Having taken in all three of the Trojans home games at the Coliseum this year, Carr likes what he has seen so far.

“They’re a great team,” Carr said. “They’re kind of just like us. They’ve got a good passing game, and they’ve got a good running game. When I go I watch everything that the running backs do. I make sure that I keep my eyes on them so I know what I’m going to do when I get up there.”

Carr, who is teammates with fellow USC commit Thomas Graham (Rancho Cucamonga, Calif./Rancho Cucamonga) on Ground Zero on the offseason 7-on-7 circuit, has been having an especially good time getting to know the other recruits and commits when he’s been at the Coliseum.

“Thomas Graham, he’s my guy,” Carr said. “I go up there with him all the time. I’m really starting to build those relationships. Every time I go to a game I see Trevon Sidney, Tyler Vaughns…everybody. We all have a ball sitting in the same section.”

Of course, as just a junior, Carr continues to receive plenty of attention from other schools. But at least for now, his mind is focused on USC.

“I’ve been hearing from Nebraska, Oklahoma, Georgia and Notre Dame,” Carr said. “I haven’t really thought about taking any official visits anywhere else or anything like that. We’ll cross that bridge when the time comes.”

“I like his physicality,” said USC head coach Steve Sarkisian. “For our system, as we’ve come to find out, when you have a big, physical wide receiver on the outside, not only catching the ball, but blocking, they’re a real presence for us. And I think he’s going to provide that same mold of the position that we’re looking for.”

– Also from Oaks Christian, Class of 2017 tight end Colby Parkinson recently received an offer from USC. The Trojans are the sixth school to offer, adding to a list that also includes Cal, Ole Miss, Tennessee, Washington and Washington State.

– ESPN 300 wide receiver Freddie Swain (Citra, Fla./North Marion) will announce his decision this coming Friday, choosing from a list of schools that reportedly includes Florida, Miami (Fla.), Tennessee, South Carolina, USC and West Virginia. Swain attended the Rising Stars Camp at USC this past summer, although it will be somewhat of a surprise if he chooses the Trojans.

– Had four receptions for 95 yards and one touchdown in a 49-13 victory over Kennett Square (Pa.) Unionville.

– Had four tackles including three tackles-for-loss in a 45-0 victory over Eagle Lake (Fla.) Lake Region.

– Caught eight passes for 230 yards and four touchdowns in a 42-8 victory over Citronelle (Ala.).

– Had three receptions for 85 yards and two touchdowns in a 76-8 victory over Los Angeles (Calif.) University.

– Had five receptions for 96 yards and one touchdown in a 30-22 victory over Glendale (Ariz.) Mountain Ridge.

In a 45-14 victory over Clinton (Tenn.) Anderson Country, Rodgers had three receptions for 87 yards and two touchdowns, and 45 rushing yards on four carries.

– Rushed for 106 yards and one touchdown in the victory over Norte Vista.

– Caught two passes for 63 yards and one touchdown in the victory over University.

– Caught six passes for 113 yards and one touchdown in the victory over Rancho Dominguez.