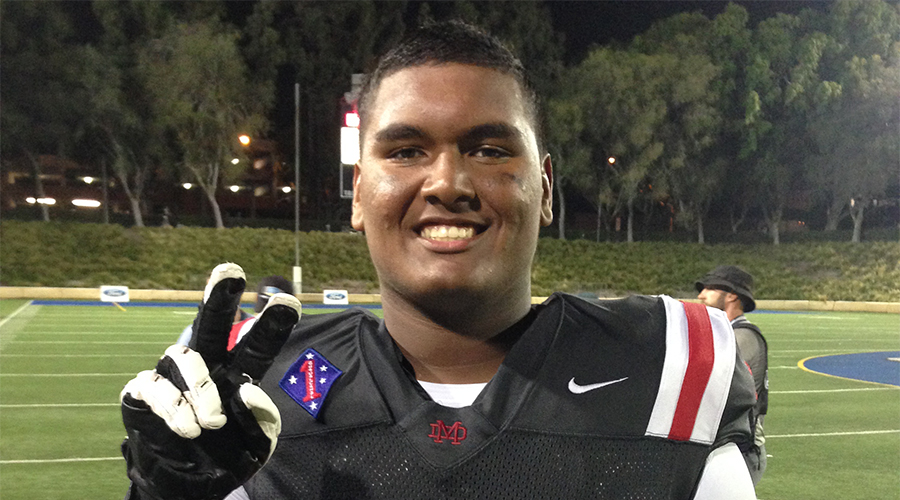 With both of his calves cramping up, ESPN 300 offensive lineman and USC commit Frank Martin II was in obvious pain during a good portion of the second half of Santa Ana (Calif.) Mater Dei’s highly anticipated season-opening matchup with La Puente (Calif.) Bishop Amat this past Friday night.

Heading to the sideline, however, just wasn’t an option.

“I had to put my team before myself,” Martin said. “I fought through the pain.”

And through it all, the 6-foot-6, 290-pound left tackle was a consistent force, playing a key role as the veteran leader of a Mater Dei offensive line unit with three sophomore starters that gradually wore down the Lancers front seven and helped the Monarchs come away with a 24-21 victory.

For a Mater Dei team that possesses plenty of talent, but also tremendous youth, the victory over a loaded Bishop Amat team was significant on a number of levels.

“This win is just incredible,” Martin said. “I can’t really put it into words. It was a team effort. Bishop Amat has a great squad. We just came out knowing that we had to execute, and that’s what we did. We made sure that all of our assignments were sound, and we just dominated.”

The game not only pitted two of Southern California’s traditional high school powers against each other, but also Martin with a pair of fellow Trojans commits in Bishop Amat wide receivers Trevon Sidney and Tyler Vaughns.

With Mater Dei’s defense playing lights-out for much of the night, however, neither Sidney nor Vaughns had the opportunity to really break loose. Still, Martin is well aware of what the Trojans are getting in the talented duo, and despite some good-natured ribbing in the weeks leading up the contest, he’s looking forward to the day when they will all be wearing cardinal and gold.

“I’m definitely excited to play with those guys,” Martin said. “I can’t wait to block for them.”

As for his pledge, Martin, who verballed to the Trojans in mid-April, made it crystal clear just how strong his commitment to USC is.

“I’m 1,000 percent solid to USC,” said Martin, who added that he has no plans to take any official visits to any other schools.

Martin took in a number of fall camp practice sessions at USC in August, and he was particularly impressed with what he saw in watching USC offensive line coach Bob Connelly, whom he’s remained in steady contact with throughout the process.

“He actually messaged me the other day and told me to dominate in this game,” said Martin, who will be in attendance at USC’s opener against Arkansas State this Saturday. “We talk every week. His technique-work is amazing and I can’t wait to work with him.”

Having spent the 2013 and 2014 campaigns at Mater Dei at right tackle, Martin looked more than at home in his first start on the left side against Bishop Amat. When it comes to where he’s going to line up at USC, however, it appears that is still up in the air.

“Coach Connelly said that I could pretty much play anywhere along the line,” said Martin, who is projected by some as a potential guard. “We’ll just wait and see.”

But that’s in the long-term. When it comes to the here and now the only thing on Martin’s mind, as a senior leader, is making sure that his team builds off the big victory over Bishop Amat.

“The potential for this team is limitless,” Martin said. “A lot of people say that we’re young, but I don’t really see that as an excuse. If we execute our assignments then nobody can stop us.”

– Class of 2016 linebacker and USC commit Daelin Hayes (Ann Arbor, Mich./Skyline) revealed this past weekend that, in addition to USC, he plans to take an official visit to Notre Dame.

– Class of 2016 athlete Troy Warner (San Marcos, Calif./Mission Hills) recently de-committed from Oregon, and USC is among the schools that he is now looking at. The Trojans have not offered up to this point.

– ESPN 300 wide receiver Freddie Swain (Citra, Fla./North Marion) now has official visits lined up to Tennessee and Miami (Fla.) in October, and he also hopes to visit USC in September. He will announce his decision on Oct. 29.

– Had six tackles and one forced fumble in a 38-14 victory over Westland (Mich.) John Glenn.

– On the offensive side of the ball Juarez completed 8 of 26 passes for 148 yards and one touchdown with one interception, while also rushing for 30 yards and two touchdowns on 12 carries.

– Had nine catches for 178 yards and three touchdowns in a 41-34 victory over Sherman Oaks (Calif.) Notre Dame.

– Had 14 receiving yards in the loss to Mater Dei.

– Had 79 receiving yards in the loss to Mater Dei.

– Caught one pass for 14 yards on offense, while also making five tackles including three tackles for loss and one sack on defense in a 26-21 loss to Euless (Texas) Trinity.

– In a 30-24 victory over Fresno (Calif.) Clovis North Jackson rushed for 11 yards on four carries and completed his only pass attempt for a 29-yard touchdown on offense, while also making one tackle and one pass break-up on defense.

– Was solid in coverage, breaking up at least two passes, while also catching 8 passes on offense for 154 yards and two touchdowns in a 41-21 loss to Peoria (Ariz.) Centennial.

– Caught a 58-yard touchdown pass in a 38-10 loss to Christ Presbyterian Academy.

– Rushed for 187 yards and two touchdowns on 15 carries in a 62-7 victory over Lafayette (Calif.) Acalanes.

– In a 49-14 victory over Canyon (Calif.) Holmes had four tackles and 2 pass break-ups on defense, and he also caught three passes for 104 yards and one touchdown on offense.

– Rushed for 15 yards on two carries, and caught four passes for 83 yards and two touchdowns in a 46-0 victory over Los Angeles (Calif.) View Park.

– Caught seven passes for 111 yards and one touchdown in the victory over View Park.

– Had five receptions for 107 yards and three touchdowns in the victory over View Park.

– Rushed for 213 yards and five touchdowns in a 32-30 victory over Ventura (Calif.) St. Bonaventure.