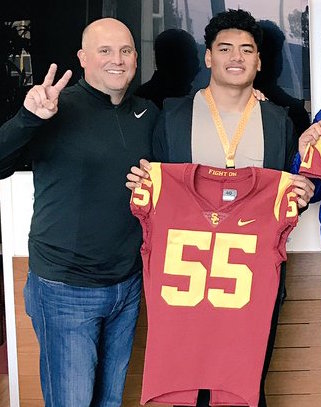 A look at what’s been going on in the world of USC football recruiting in recent days.

There has been a definite trend in recent years in which more and more recruits are making early verbal commitments. With so much time to go before National Signing Day, however, those pledges aren’t necessarily worth their weight in gold, and so, it’s not uncommon for a number of those players to ultimately de-commit – often times sooner than later.

The outstanding wide receiver prospect out of powerhouse Corona (Calif.) Centennial committed to the Trojans back in early January. Just last Friday, however – less than two months after giving that pledge – he announced his de-commitment via his Twitter account. Allen will continue to consider USC as an option, but it certainly appears as though he will wind up elsewhere in the end.

The good news is that the loss of Allen certainly isn’t a sign that USC’s Class of 2018 recruiting haul is in trouble. In fact, just five days prior to his defection the Trojans received a verbal pledge from one of the top-rated players in the entire nation in Palaie Gaoteote, and it looks like this is one that is likely to stick.

The 6-foot-2, 230-pound linebacker not only grew up dreaming of playing for USC, he also has a real appreciation of the tradition of the program and the history of Polynesian players who have come before him there – including Junior Seau, whose famed No. 55 jersey he posed for pictures in while on an unofficial visit just prior to his commitment.

In Gaoteote the Trojans gain the services of the top-rated linebacker in what is an extremely deep year at the position. Currently lining up on the outside for Las Vegas (Nev.) Bishop Gorman, he’s likely to play at one of the two inside spots at USC.

The Trojans now hold a total of five verbal commitments from the Class of 2018.

The ink might barely be dry on the Letters of Intent from this past signing day, but that doesn’t mean that the USC coaching staff has been taking it easy. In fact, for the past three weeks it seems like a day can’t go by where they don’t dish out an offer to a big-time prospect.

Of particular interest has been the number of offers extended to Class of 2018 wide receivers by the staff as of late – something that probably should have tipped everyone off to the fact that maybe Allen’s pledge was teetering.

The Trojans have offered close to 20 receivers from the Class of 2018 at this point, with Chase Cota (Medford, Ore./South Medford) and Solomon Enis (Phoenix, Ariz./North Canyon) serving as the two most recent. Both Cota and Elis are among a host of players who have visited USC unofficially over the course of the last two weeks.

Having just landed Joseph Lewis and Randal Grimes this past signing day, after taking five receivers in the previous class, it will be interesting to see just how many receivers USC opts to take this time around.

The Trojans figure to be in an extremely solid position for Pittman. After all, not only does his brother, Michael, currently play at USC, but Helton and his staff were the first school to extend an offer his way last spring. He caught 55 passes for 1,329 yards and 10 touchdowns last season.

Pittman’s transfer came fresh off the heels of the announcement by his  former teammate at Oaks Christian, Class of 2018 USC quarterback-commit Matt Corral, that he has enrolled at Long Beach (Calif.) Poly.

Corral passed for 3,188 yards and 25 touchdowns last season. The fact that he’ll now team up with prolific tight end/wide receiver Camren McDonald figures to give USC a boost in their efforts to land the 6-4, 210-pound playmaker. Look for those two to team up for a whole host of highlight-reel connections in the fall for the Jackrabbits.

As noted, a number of unofficial visitors have made their way to the USC campus over the past two weeks. Here’s a look at some of the names: