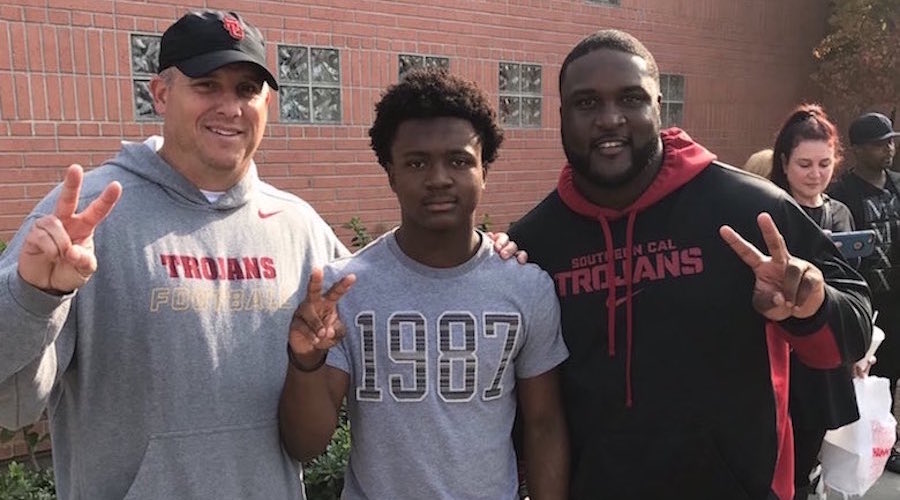 There were a number of recruits in attendance at USC this past Saturday for a practice session that was closed to the media, including Class of 2018 standout Marcus Johnson, who gave a verbal pledge to the Trojans immediately afterwards.

Standing 5-foot-10 and 170 pounds, Johnson is an explosive athlete who saw time at cornerback, wide receiver and running back at nearby Los Angeles (Calif.) Hawkins this past season, and the Trojans coaches are keeping an open mind when it comes to what side of the ball he’ll potentially line up on at the next level. He’s part of a team that is loaded with plenty of big-time prospects, including his own brother, Class of 2017 cornerback Greg Johnson, who recently decommitted from Arizona and is now considering USC among a host of others.

The younger Johnson is the fourth commitment for the Trojans from the Class of 2018, joining the Westlake Village (Calif.) Oaks Christian duo of linebacker Bo Calvert and quarterback Matt Corral, as well as Harbor City (Calif.) Narbonne linebacker Raymond Scott.

Of course, in a day and age when early pledges have become the norm, so too have late defections, and it was always anticipated that there would be some movement in USC’s class leading up to signing day, so these recent developments shouldn’t exactly come as surprise, and they aren’t a reason for concern either. That’s particularly the case this recruiting cycle, as the staff at USC is still involved with a high number of elite prospects, many of whom have shown renewed interest in the Trojans thanks to the team’s outstanding performance on the field.

As it stands now, USC holds a total of 13 verbal commits from the Class of 2017. With a max of 23 rides to give, that would appear to indicate that the Trojans have room for 10 more recruits – if, that is, there are no more defections.

One of those current commits, Pago Pago (American Samoa) Leone athlete Juliano Falaniko took an official visit to USC this past weekend. The Trojans were also set to host wide receiver Marquise Brown (Santa Clarita, Calif./College of the Canyons) and Cal cornerback-commit Je’Quari Godfrey (Oakland, Calif./Bishop O’Dowd) at one time, but those plans were cancelled.

Falaniko (6-foot-4, 202 pounds), who most likely projects as an outside linebacker, has been committed to the Trojans since last April, but he recently took an official visit to Oregon State, leading to speculation that he could be set to part ways with USC as well. The fact that he made the long trip to Los Angeles, and that the staff took the time to host him, would appear to show that there is still a strong relationship there.

With the Southern California Regional Division 1-A title on the line, Class of 2017 USC quarterback-commit Jack Sears put on a show, leading San Clemente (Calif.) to a 39-35 victory over Huntington Beach (Calif.) Edison – all with current Trojans signal-caller Sam Darnold standing on the sideline.

Sears completed 21 of 31 passes for 248 yards and three touchdowns with two interceptions, and he also rushed for 84 yards. Most impressive of all, however, was the sturdiness that he showed late, and the big plays that he made when his team needed them most.

Sears and San Clemente next face Loomis (Calif.) Del Oro in the CIF state finals at Sacramento State on Saturday at 4 p.m.

* The USC staff handed out offers to these six prospects in recent days:

* Layton (Utah) linebacker Tayler Katoa will announce his decision this coming Wednesday morning. The Trojans are thought to be a strong contender for the Class of 2017 prospect. He’s taken official visits to USC, Boise State, UCLA, Washington, and just this past weekend, Utah.

* College football’s recruiting dead period officially went into effect on Monday, and it extends through Jan. 11. For the next month the Trojans staff is not permitted to have in-person contact with any prospect, so no official or in-home visits will take place. Electronic and written correspondence is allowed.