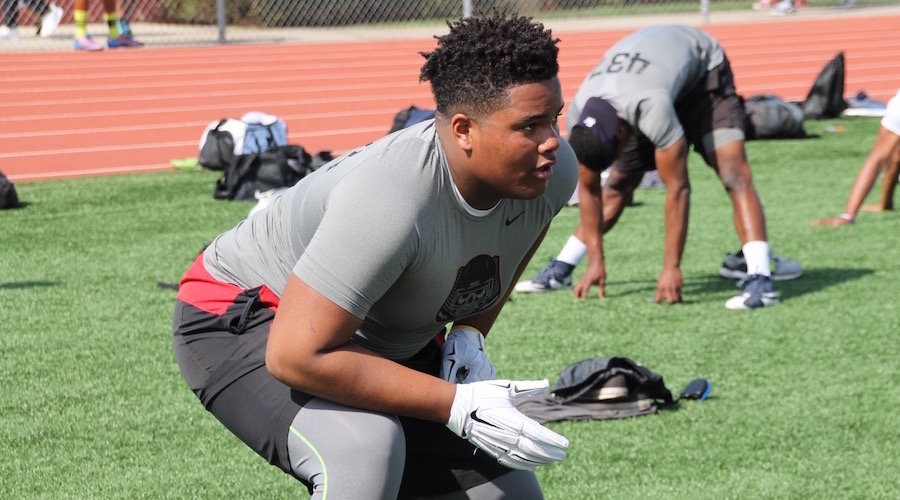 The Los Angeles regional camp for The Opening was held today in Redondo Beach with over 350 players in attendance.

There were 10 invites presented after the camp to The Opening finals, which are held in July at Nike headquarters in Oregon. The following players earned invites: DB Thomas Graham, DB Bubba Bolden, RB Stephen Carr, OL Wyatt Davis, WR Joseph Lewis, DB Darnay Holmes, DB Deommodore Lenoir, DE Jaelan Phillips, WR Tyjon Lindsey and DT Haskell Garrett. I thought it was a pretty accurate group of invites based on what we saw on the field.

Here’s a recap of how the Trojan recruits looked:

Matt Corral looked like he belonged, even though he’s only entering his junior year. He’s got a lot of solid mechanics and certainly looks the part. He’s got every chance to be one of the elite quarterbacks in the country his senior year.

I’m going to say that offensive lineman Wyatt Davis had the best day of anyone but I will add that Stephen Carr was right there with him. Stephen is really evolving into a polished combination of thick size (6-1, 200 range) with a naturally fluid running style. We don’t see many pure running backs these days but he’s one of them and he’s a good one. Nathan Tilford was interesting, when he took a rep it was usually a chance to see his physical nature in action, he’s blessed with a lot of skills in that area. But he also didn’t do that much to stand out, and I came away wishing I would have seen more from him.

Another very good group, not too far behind last year’s stellar crop at the position. The guy who really jumped out was Tyjon Lindsey, who is explosive in every sense of the word. And what’s most impressive is that he always looks like he’s in control no matter what he’s doing on the field. He’s not tall by any means but he’s not real skinny either so there is decent size there, ideal for the slot receiver spot. A couple taller outside receivers who looked good were Hawkins teammates Joseph Lewis and Jalen Hall. It’s no surprise to seem them do well as they’ve been doing it consistently on the 7-on-7 circuit as well. Osiris St. Brown tried to go but had to sit out the majority of the day with an injury.

As mentioned above, Wyatt Davis (photo above) was fantastic at left tackle in one-on-one drills and in all the other position drills. He even took time before the camp started to work with Hunter Echols on some pass rush moves. He’s put in a lot of work to get the ideal frame for the tackle spot, he moves well and he was my vote for overall camp MVP. I liked Chuck Filiaga at tackle as well, he’s also got an excellent frame, but he didn’t have the day that Davis had. Chuck has a lot of tools though, he’s definitely the kind of player the Trojans want to bring in. And in terms of a center Brett Neilon was the top performer there. And for a 2018 prospect to watch, Tommy Brown went with the first group at right tackle and had somewhat of an up and down day, but his ups usually showed how strong he is. He’s just a mammoth guy who should grow well into his body.

I think this was the deepest group outside of the WR/DB’s, which are always advanced in the off-season due to 7-on-7. I thought the top player was Haskell Garrett, a thick interior player who plays with a lot of force and energy. You can see why Urban Meyer reached to the west coast for Garrett, would love to see the Trojans have a chance to flip this one. Martin Andrus was another top interior guy, he moves well for his size. Jaelen Philips was the top edge pass rusher there and he’s a little lanky right now but will grow into a nice frame at the college level, Echols is another player with nice edge skills who needs to do some filling out. Jason Callier from Bosco looked good, as did a pair of 2018 guys with his Bosco teammate Sal Spina and Adam Plant from Bishop Gorman.

It wasn’t a great year for senior linebackers, and I would say the most noteworthy guys I saw were 2018 guys with Trojan offers in Merlin Robertson from Serra and Raymond Scott from Narbonne, along with Solomon Tuliaupupu from Claremont. All had a physical presence during the day.

What an impressive group. Not only were there four invites to the Opening from the secondary but those weren’t the only guys who stood out. I’ll start with the two Trojan commits in safety Bubba Bolden and corner Thomas Graham. The word smooth comes to mind with both of them. Bolden has such a tall and lanky frame yet there is nothing gangly about his movements on the field. He was limping at the end of the day with what appeared to be a groin issue. Graham was among the most fluid of the corners in the footwork drills, which was impressive considering he played a lot at safety last year. The best player in the group, however, was Darnay Holmes, his skills are just a notch above right now. I also liked Lenoir, Greg Johnson and Jaylon Redd. One 2018 name that is starting to rise, and for good reason, is Olaijah Griffin, a tall corner with nice athleticism.

There was a good showing of people with USC connections. Chris Claiborne and Scott Huber were former players who served as event coaches, while former OL coach Bob Connelly served as a coach too. Current players in attendance included John Houston, Ajene Harris, Osa Masina and Jackie Jones, while former player J.R. Tavai was there to watch his younger brother (Harris and Masina also had younger brothers taking part).