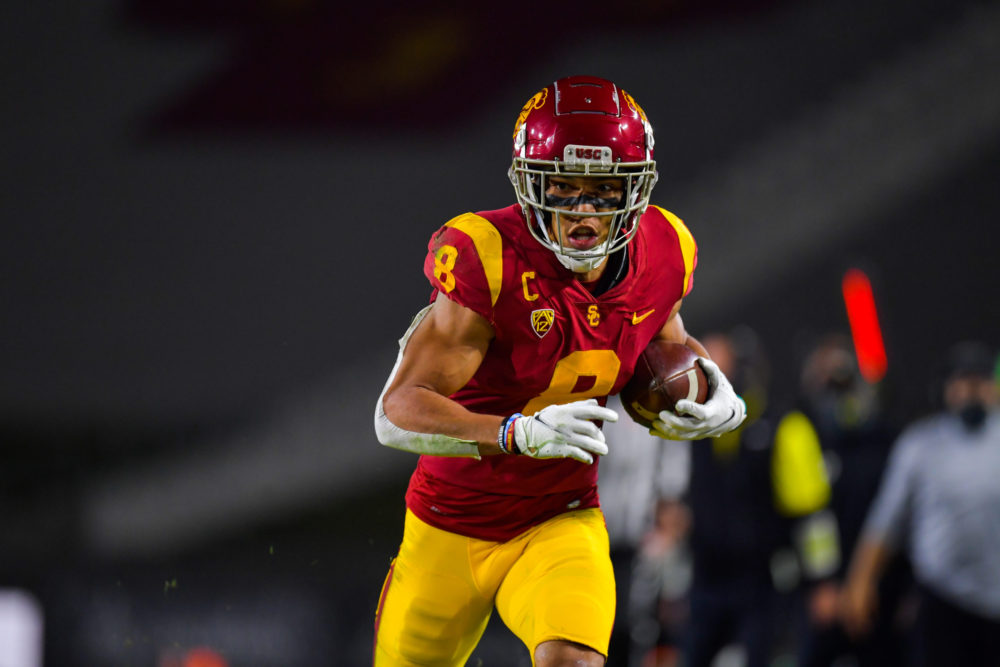 USC Pro Day is here, and all eyes will be on the Trojans invited to the NFL Combine and working out on campus Wednesday morning. We’ll be updating here with all the news and notes regarding the Trojans and their testing numbers, plus commentary provided via coverage from the NFL Network.

Hopefully Wednesday provides the final push for offensive tackle Alijah Vera-Tucker, who has solidified himself as a first-rounder and could potentially move up into the top half of the round. Wide receiver Amon-Ra St. Brown and defensive tackles Marlon Tuipulotu and Jay Tufele could be fighting to be the second Trojan taken in this upcoming draft, while safety Talanoa Hufanga is hoping to prove himself in the eyes of the NFL decision makers.

Before pro day, USC offered something of a tribute to the Trojans hoping to move onto the NFL Draft this season.

NFL Network’s Daniel Jeremiah begins the coverage raving about both St. Brown and Vera-Tucker. St. Brown is seen as a wide receiver who can do a bit of everything and Jeremiah said Vera-Tucker has been a “riser” in this draft following the season due to the fact that there is very little or no bad tape on him, either at guard or tackle.

Jeremiah has Vera-Tucker ranked as his No. 1 interior lineman in this draft, but there is a ton of intrigue as to whether he can play left tackle in the NFL.

According to NFL Network, a couple of number updates:

Vera-Tucker checked in at 6-foot-4, 308 pounds and put up an impressive 36 reps on the bench press.

St. Brown put up 20 bench press reps. He had been shooting for 25, but 20 is an impressive number for a wide receiver.

Both Jay Tufele and Marlon Tuipulotu did 30 reps.

Talanoa Hufanga had 12 bench press reps, while Tyler Vaughns did 7.

Very, very impressive numbers from the linemen in the bench press.

“He’s a clean player when you watch him on tape,” Jeremiah said of Vera-Tucker. “He’s played really well at tackle and at guard so you’ve got some versatility there.”

Jeremiah said Vera-Tucker’s arm length of 32 1/8 inches will likely make projected as an interior guard for many teams throughout the league. That arm length is on the shorter side for potential tackles.

Some jumping numbers for St. Brown and Vera-Tucker.

The 40-yard times will be very important for several USC Trojans today, as players like Vera-Tucker, St. Brown, Hufanga and Vaughns could see their stock increase to varying degrees based on good times.

All the initial times will be handheld, as there is no official electronic time due to these pro days being on local campuses instead of the usual one in Indianapolis.

Jeremiah called that a great time for Hufanga, since there was some concern that he could dip into the 4.7 range

Jeremiah also called that a good time, though St. Brown will want to improve on his next run. Jeremiah said the average 40 for wide receivers last year was a 4.52.

Good time for Tufele going under that 5 second mark.

Tuipulotu: Tweaked his hamstring several weeks ago, according to Jeremiah through Tuipulotu’s agent. He is only running a 10-yard split today, rather than the traditional 40.

St. Brown posted a 4.52 on his second 40, so while he didn’t improve, he backed up his first time. He’ll likely be a little disappointed with the 40 times, but good testing overall for St. Brown, who could wind up as a second-round pick.

Vera-Tucker improved on his time a bit in his second run, posting a 5.10.

Hufanga decreased his number a bit on his second run, posting a 4.61

All 32 NFL teams are in attendance for the USC Pro Day.

USC quarterback Kedon Slovis is throwing to the USC receivers during drills. While there have been some positive numbers posted by Trojans, the best news for USC fans might be seeing Slovis slinging the ball all over the field today and looking completely healthy while doing so.

USC head coach Clay Helton said Slovis would be fully healthy for the start of spring ball after he suffered a shoulder injury on the final play of the Pac-12 Championship game against Oregon. Slovis suffered an elbow injury against Iowa in the final game of the 2019 season and something clearly wasn’t right with him in the early part of the 2020 season.

But Slovis is throwing the ball with authority to St. Brown, Vaughns, and former Trojans Dominic Davis and Matthew Hocum today.

“Just a rock-solid workout,” Jeremiah said of St. Brown, adding that he looked sharp and crisp in his routes.

St. Brown worked both outside and in the slot, and has said some teams have talked to him about playing both spots, while others see him as a true slot receiver.

The Bengals are an interesting team in this draft because they are at No. 5 and clearly don’t need a quarterback. They’ve been linked to Oregon offensive lineman Penei Sewell and it’s very unlikely that Vera-Tucker could get taken that high. But Vera-Tucker’s versatility could make him someone that teams trade up or down to position themselves to take in order to continue building offensive lines in front of a lot of young starting quarterbacks.

Hufanga was very fluid going through safety drills and that was to be expected after his training work with Troy Polamalu. It was unlikely that he would post dominant times or numbers today, but he once again showed NFL scouts that he can move sharply in the secondary. If he drops due to the testing numbers, it’s likely that someone is going to get a steal, and a guy who can contribute on defense and all over special teams.

After the event, St. Brown said he liked showing his competitiveness and he’d practiced for every event except for the three-cone drill. When time for that came, he said the coach running the drill urged him to give it a shot and he jumped in to do it. St. Brown said he was told that he posted one of the faster times, so he was proud of the result and the effort he put in.

“I just want teams to know that I’m going to be one of the most competitive guys out there,” St. Brown said of the message he wants to send to NFL teams. “Consistency is something that I pride myself in.”