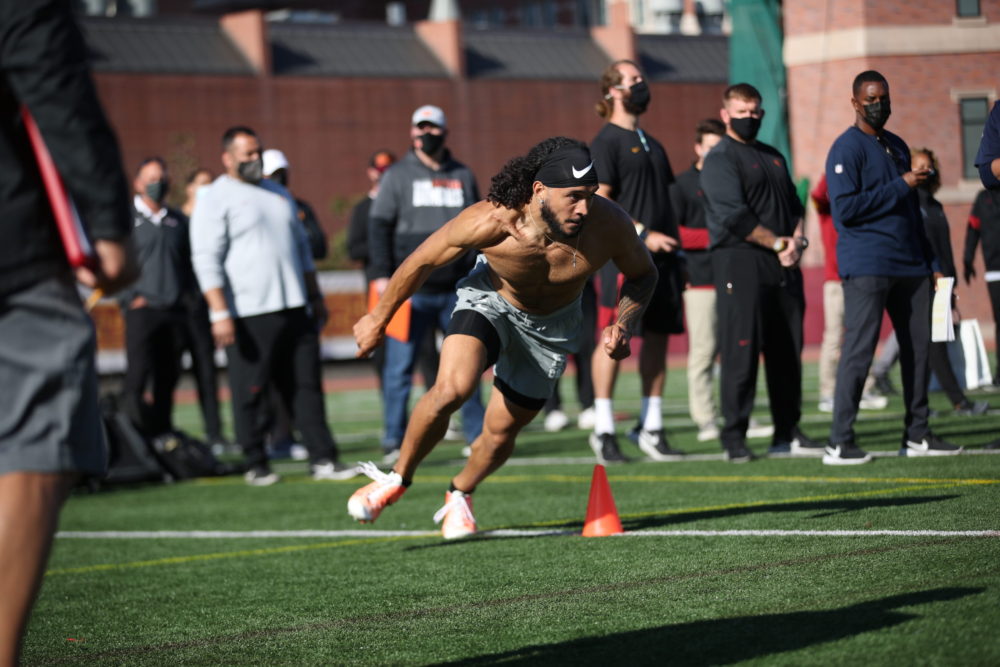 There wasn’t a showing that would have had the NFL Combine stands buzzing, but USC’s soon-to-be NFL draft picks put together a strong, solid showing on Wednesday morning.

All 32 NFL teams were represented as General Managers, coaches and scouts visited the USC campus to watch the Trojans’ six draft-eligible players and three potential free agents go through testing and drills. Both the Vikings, with Rick Spielman, and Raiders, with Mike Mayock, had general managers in attendance. The Vikings have the 14th overall pick while the Raiders have the 17th, as both teams are right in that mid-first round area where USC offensive lineman Alijah Vera-Tucker has been projected in a number of mock drafts.

Ultimately, it doesn’t appear that any of the six Trojans who worked out in the hopes of being drafted next month — Vera-Tucker, wide receivers Amon-Ra St. Brown and Tyler Vaughns, defensive tackle Jay Tufele and Marlon Tuipulotu and safety Talanoa Hufanga — did anything truly eye-opening in terms of blowing the roof off their expected draft position or caving in the floor.

It was a solid, workmanlike performance from a group of players who have been tremendous contributors to USC football over the past few seasons.

Vera-Tucker’s numbers were strong overall, highlighted by 36 reps on the bench press — a great number for him. He measured in at 6-foot-4 and 308 pounds and ran 5.15 and 5.10 in the 40, according to NFL Network. His vertical jump was strong, at 32 inches.

The number that will stick with him up to and after the draft is his arm length, at 32 1/8 inches. That’s on the very short side for a left tackle and likely the number that shoves him inside to guard only for a number of NFL teams. There’s a downside in that Vera-Tucker would prefer to play tackle, but the upside takeaway is that he absolutely solidified himself as the draft’s best interior lineman and that’s not a bad place to be heading into April.

The comparison for Vera-Tucker thrown around quite a bit during the broadcast was the Dallas Cowboys’ Zack Martin, who played left tackle for Notre Dame, was selected 16th overall and quickly became one of the best offensive guards in the NFL. And to take the comparison even further, Martin also measured in for his Combine at 6-foot-4 and 308 pounds, had shorter than 33-inch arms and broad jumped eight-feet, 10-inches, exactly the number Vera-Tucker hit on Wednesday.

Again, a good day for Vera-Tucker that should keep him locked into the first round of the draft.

St. Brown did everything expected of him on Wednesday, with the only knock being a slightly slower than desired time in the 40. He measured in at 5-foot-11 and a half, and 197 pounds and put up very strong numbers in the testing.

His 20 bench press reps is a strong mark for a wide receiver, as was his 38.5-inch vertical. He ran 4.51 and 4.52 unofficial 40 times, which was probably the number expected from him, as he has always been more quick than fast and has more football speed than track speed.

Brown likely impressed with his route running and ability to catch every ball smoothly and in stride. He also got to show some of his work ethic and competitiveness, competing in every drill and turning every catch upfield for extra yards. He’s such a polished receivers that teams likely know exactly what they’re getting with him. He doesn’t have the measurables of Michael Pittman, who went at the top of the second round, but even in a strong wide receiver class, the hope is that St. Brown has done enough to earn a second round grade, or somewhere in the top half of the third.

Hufanga was going to be an interesting case as soon as he discussed his combine training earlier this week. Instead of spending every waking minute at a training facility like so many other prospects, he worked one-on-one with former USC standout and Pro and College Football Hall of Famer Troy Polamalu.

Hufanga said he worked more on flexibility and athleticism than pure power, as he didn’t lift many, if any, weights during his prep. While he did 12 reps on the bench, his 4.22-second shuttle time would have been a top-25 mark at the 2020 NFL Combine and his 4.61-second 40 is in line with a number of safeties drafted last season.

But where Hufanga was always going to shine is in drill work, where he was again impressive and showed his instinctual and quick he is as a safety. Draft grades range quite a bit for him and the injury question is one that will linger and certainly hurt his ceiling when it comes to draft position, but some franchise is going to get a football player in Hufanga.

Defensive tackles Tufele and Tuipulotu were interesting cases heading into the season, as Tufele was mentioned as a potential late first-round pick while Tuipulotu hung on as a likely-drafted Trojan. But Tuipulotu put together a very good shortened fall season while Tufele opted out and trained for the combine.

The two were often tied together at USC, so it was no surprise to see how similar their times and numbers were on Wednesday.

Tufele had a good showing in the 40, clocking a 4.97 to get under that 5-second mark. Tuipulotu didn’t run the full 40 as he’d tweaked his hamstring in the weeks leading up to the event. But he posted a solid 4.69-mark in the short shuttle, which landed him right behind Vera-Tucker there.

Wide receiver Tyler Vaughns isn’t the guaranteed draft pick that some of the other USC prospects are, but it’s tough to argue with his productivity and he is another Trojan who performed well on Wednesday.

Vaughns posted a 4.62 time in the 40, to go with a 31.5-inch vertical and 10-foot broad jump. He was unfortunate to get a couple deep balls that wound up coming over the wrong shoulder and he wasn’t able to adjust to make what would have been very difficult catches, but otherwise he once again put on display his solid route running and strong hands as a receiver.