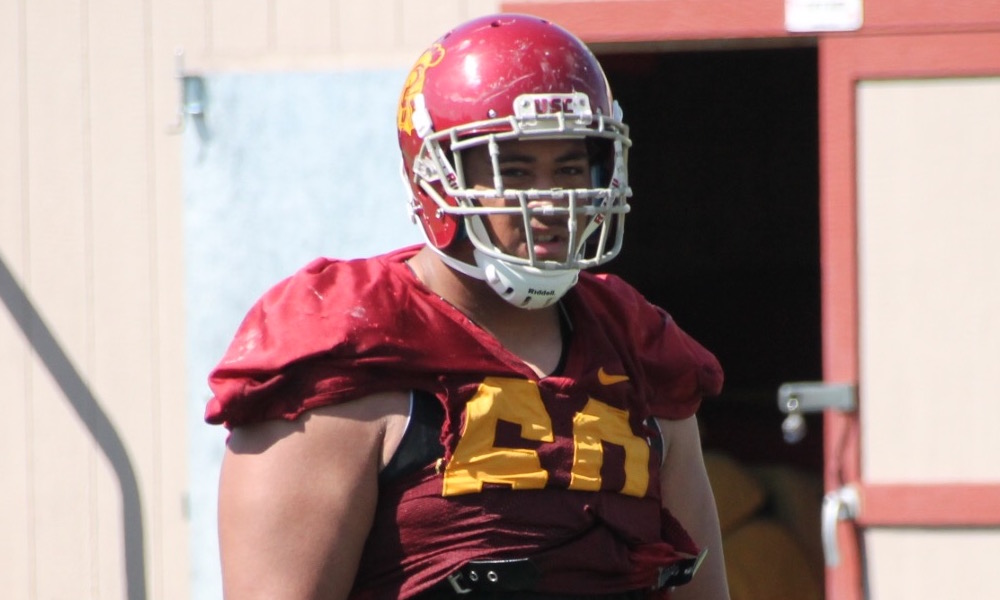 The Trojans continued their preparations for the season opener with another practice under the hot sun today on Brian Kennedy-Howard Jones Field.

At this point there is no doubt that these players are ready to hit somebody besides a teammate, to go up against somebody who doesn’t know every play they run. This camp has been longer-than-normal with the lack of two-a-day practices, which extended the pre-season work from four weeks to five weeks. As one player said, “there’s only so many speeches you can hear, only so much rah-rah, eventually it’s time to hit somebody.”

USC coach Clay Helton talked about the points of emphasis from the practice, which contained a lot of focus on the Western Michigan Broncos.

“It was a good day for us,” Helton said. “Really a situational day for us in two areas. Really re-emphasizing our third-downs, which I think are going to be critical, especially defensively, and a lot of focus on special teams coverage lanes.

“Looking at tape, obviously this is a team that can be a no-huddle team and has history on their staff of working no-huddle, and being able to get off the field defensively where those plays don’t climb up. On what’s going to be a hot day I think it’s going to be imperative. The other thing that you felt today was us really working our coverage lanes. Going in and continuing watching tapes, you see how dangerous Darius Phillips is and why he was the special teams MAC player of the year last year. He is one that can not only make you miss, but if he gets behind coverage, he’s gone. He has that type of speed – very, very dangerous. So, we put a lot of work into that today.”

In the team drills today, the offense saw a lot of success passing the ball. Sam Darnold hit Velus Jones with a pretty over the shoulder deep ball for a touchdown, Sam also hit Stephen Carr down the seam with a wide open touchdown and then completed a long ball down the sideline to Jalen Greene. Matt Fink also had a mid-range throw across the middle to Carr.

The defense made some plays too. Jamel Cook made an interception off Darnold trying to hit Tyler Vaughns, Greg Johnson had a pick off Fink, and Matt Lopes put a solid pop on Velus Jones. Helton said after the practice that Johnson will definitely play on special teams and could be part of the corner rotation.

“Greg has tremendous football instincts,” Helton said. “Clancy has confidence in him, and that’s big.”

It is rare for Clancy to have confidence in a freshman, and the issue of trust for younger players vs veteran players on the initial depth chart was a topic of conversation when the chart was released earlier in the week. Helton address the thought of “tenure vs talent” in his evaluation process.

“Really early, as you’ve seen with my experience, I lean a little bit more towards the experience of knowing who has been in games, and who operates and functions,” Helton said. “When you have a Deontay Burnett, and Steven Mitchell, and a Jalen Greene, you’ve seen them play a lot of football, and here comes some four-out-of-five receivers that have been redshirted, two true freshmen that you haven’t seen, so you edge them in and you see how they react. Like I said the other day, usually I can see right when I get in the first huddle, you can literally go around and go, ‘yeah he’s fine, yeah he’s fine, yeah he’s fine, oh God there’s the eyes that are that big,’ and you just get a feel. Any time you walk in that Coliseum for the first time, it’s a new experience, and we know that, we understand that. We’re still going to put them out there because they need that experience. But it’s something that we’ll lean a little bit more on the vets that have been here, and groom those young guys in. And as they feel comfortable, and they make plays, the more opportunities come to them.”

Among the highlights in the various special teams drills were a blocked kicks by Austin Jackson and Ajene Harris, and a nice turnover by Jackie Jones on an attempted trick play.

As far as the placekicking competition is concerned, it wasn’t a great day for either kicker as Michael Brown hit 2-4 (long of 32) and Chase McGrath was 2-5 (long of 32). For Helton, however, the time has come for him to make a decision.

One of things we saw today from Helton during the kicking portion was him staking his place near the kickers when they kicked, to heighten the pressure of the situation.

“Yeah, you know, we’ve done that the last kind of two weeks of just having that pressure situation with the head coach breathing down your neck, and they know every kick matters, and it’s really been a good two weeks for us to see who is consistent. I do want to have a chance to go in and view the tape, talk to Bax [John Baxter], and out of respect to the kids, be able to visit with them before I announce anything.”

Trojan linebacker Cameron Smith will be forced to sit out the first half on Saturday as a result of a 2nd half penalty in the Rose Bowl. Smith will not be allowed to come out for the coin toss as a captain, and he will be forced to watch the first half from the USC locker room, in particular he will watch from the television in Helton’s office. He will get stretched at halftime, and then will go through the warm-ups prior to the second half.

“It is what it is,” said Smith. “I’ll probably pace around a little and try not to get stressed out, and then I’ll come out in the 2nd half with fresh legs.”

“Injury-wise, it was good. Viane [Talamaivao] had another full day today. He felt really good. Daniel [Imatorbhebhe] got even more work. I’ve talked to him, feels about 95 percent, so he’s in an area where he can help us hopefully Saturday. The only injury coming off yesterday, really, that got us was Liam [Jimmons], a high ankle sprain. The X-Rays were negative. We’ll see how long that takes to get back.”