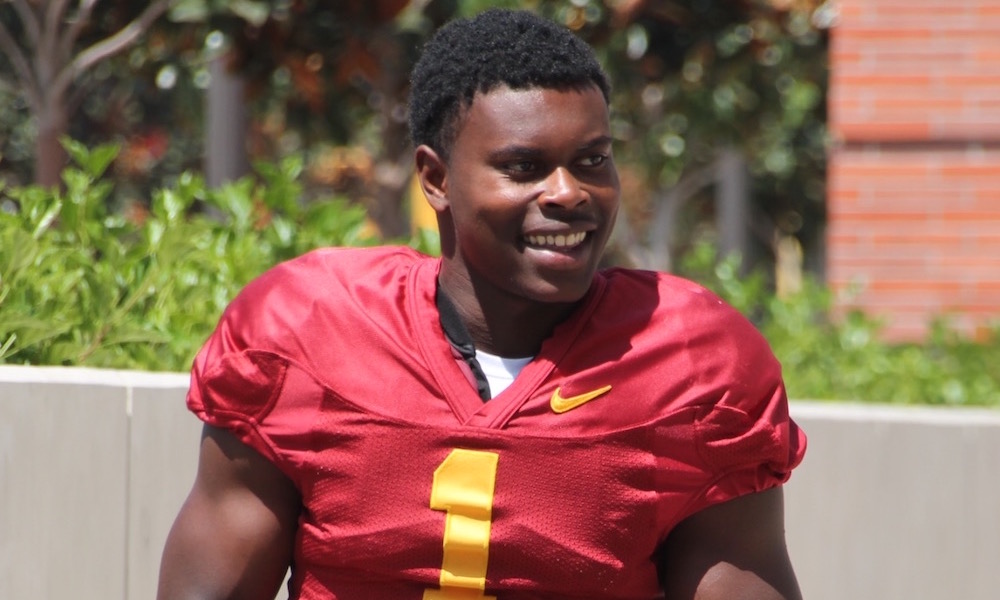 The Trojans continued preparations for Stanford on Wednesday with extended work on third-down packages for both sides of the ball.

“I think about Stanford offensively, and the limited possessions that they give you in a ball game, and how important it is to get off the field defensively.” USC coach Clay Helton said. “I really think the third-down success will all be due to how we act on first and second down. They are masters of third-and-one to five. They’re the best in the country at it with that power-run game and play-action.

“Offensively we have to continue where we set out last week. We played a team that was a ball possession group, and I thought it was critical to go 7-of-11 last week, and really make the most of each opportunity that we were given, especially down the stretch. We need to keep the ball and keep drives alive, so that was the primary work.”

Iman Marshall had a nice pass break-up in an early throwing drill. Sam Darnold hit Joseph Lewis down the seam with a pretty pass, the 2nd time in two days that those two have hooked up for a big play. Helton mentioned after practice that the “light” has really clicked on for Lewis in the last week, saying that Joseph has a powerful, natural skill set that reminds him of JuJu Smith-Schuster in many ways, and possibly “a little faster”. Sam also hit a deep throw to Tyler Vaughns on the final play of the drill. For what it’s worth, Cameron Smith and John Houston were lining up with the 1’s in this drill, and Jordan Iosefa and Levi Jones were with the 2’s.

In the field goal period, Chase McGrath hit 9-10 and Michael Brown was 5-9 with three kicks blocked.

Christian Rector had a sack in the service team period.

In the final team period, Darnold hit Trevon Sidney with a touchdown, and there were various screens to Velus Jones, Vavae Malepeai and Ronald Jones. There was also an intermediate throw to Vavae that Cameron Smith barely missed for a tipped pass. Tyler Vaughns had back-to-back good plays to end the drill.

Among the guests in attendance were Jim Hardy and Shaun Cody

“Had a good day today health-wise. Nobody really came off the field. Chuma looked better. Held Bubba again, and he’s looking more doubtful for the game. But Chuma was promising. Michael Pittman is probably about a week away, he’s getting his burst but not where he needs it to be as a wide receiver.” – Helton

Jack Jones went almost 100 plays last weekend. Is that a concern or is that something that he can handle?

He did a lot of plays last week and was on a lot of special teams also. I know you saw Isaiah Langley get some work in this week, and [we’re] hoping he can help out. And we’ve taken him off a special team or two. He’s just such a dynamic player and does such a great job. He kind of reminds you of a young kind of Adoree’-ish type player. And he has no lungs. He never seems to get tired, but 100 plays is a lot, yes.

At this stage of his career what kind of player do you think Marlon Tuipulotu is as a run defender?

I thought he did a good job. He actually got 17 reps in that game last week, and really graded out well. Held the point and did a great job. And there’s another freshman that we’re talking about. Now he’s had the advantage of being here for a spring, so his light clicked on a little bit quicker, and he’s had more reps. But I’m really proud of where he’s at, and I hope we can bring another big man, Brandon Pili, on also to be able to get to the point where he can help us this year?

Do you think Pili can help this weekend?

We’ll see. We’ll see. I’ll sit down with Clancy [Pendergast] at the end of the week and basically see where our young people are at, and who he’s counting on playing, but I know that we’re trying to prepare him to help us this season.

How do you think the kickoff and punting units performed?

I thought our punt team was phenomenal, and it started, really, with Reid [Budrovich], just the location of his punts, the depth, I mean he averaged 51 yards, but he never gave [Darius] Phillips the opportunity to get started. That was opposite of what you saw on kickoff. We missed the location on the long kickoff, a ball that was hopefully going to be pinned in the far right corner, and it got to the middle of the field, and it hurt the coverage. Location is huge when it comes to kicking. I thought our punt team did a phenomenal job. Kick cover, obviously, cost us a touchdown, which rarely happens under Coach [John] Baxter. I know he’s working tirelessly to make sure that it doesn’t happen again for a long time.