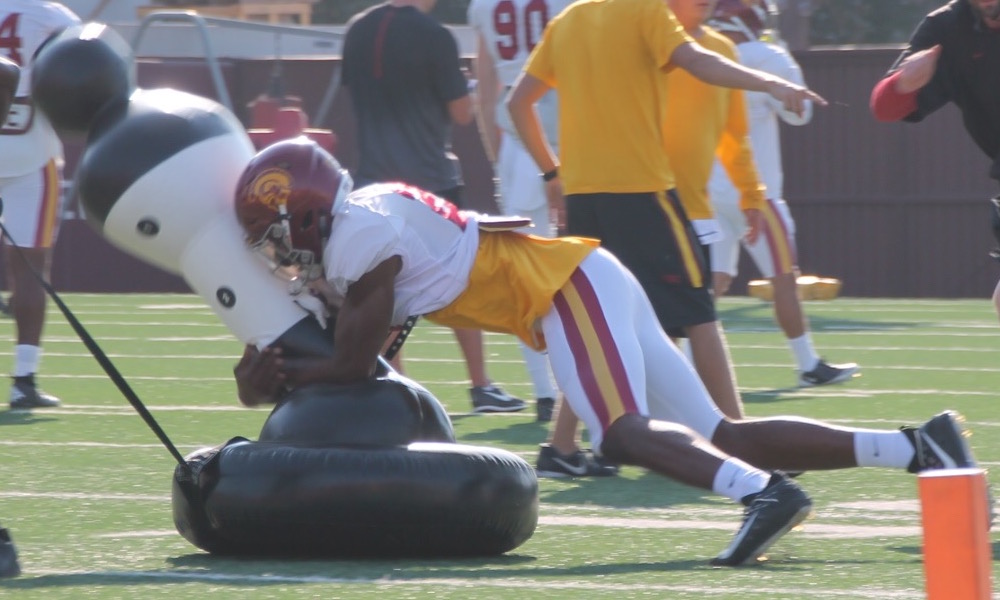 It was a physical practice for the Trojans on Tuesday in full pads and featured an extended run drill session, work with the mobile tackling dummies, short-yardage drills and a lot of hard contact. It also included a pair of dust-ups between offensive and defensive players, a sign that USC coach Clay Helton says indicates that the players are ready to put last week behind them.

“Obviously, defensively, and you saw today, I thought they had their jaws set today – I mean, they’re mad, and that’s what you want,” USC coach Clay Helton said. “You want a defense that’s mad and ready to come to the park. They have a pride about them, about playing good, physical football, and you know, that that was not them on Saturday.”

In the run drill I thought Vavae Malepeai ran hard. Jordan Iosefa got a lot of work with the 1’s next to Cameron Smith, and the 2’s featured a rotation between Grant Moore, Houston and Olajuwon Tucker. Christian Rector put a big hit on a RB, probably the biggest hit of the day. Brandon Pili also took a ballcarrier to the ground. Stephen Carr broke through the middle for a 15 yard gain, and the one of the only pass plays of the drill was the last play, a deep throw for Josh Imatorbhebhe that Jackie Jones broke up nicely.

The field goal drill was held on the far side of the field away from where the media is located so it was hard to tell what the exact totals were but it appeared as if more kicks were missed than were made. Jackie Jones blocked one attempt.

As the field goal work was done, Sam Darnold started jogging to the next drill, DL coach Kenechi Udeze tried to turn it into a race, Sam kicked it into a higher gear and Kenechi trailed off to the DL drill area. The next drill for the offense was 7-on-7 and Sam got it started with a beautifully placed touchdown to Joseph Lewis.

In the service team work, special kudos need to be given to walk-on RB Corbin Jountti, who really went at it and gave the defense a good look.

In the final team period of the day, Sam went to Deontay Burnett right away for a first down pick-up. Iosefa had a hard tackle downfield. Tyler Vaughns had a catch, Isaiah Langley made the tackle and the two ended up rolling around for a few seconds before being separated by teammates. A couple plays later, Josh Imatorbhebhe and Ajene Harris got into it, Jackie Jones jumped in, the group was quickly surrounded by teammates, the horns blew and Helton brought the team together for a quick talk.

“I told them I love where they’re at,” Helton said. “You want to be right there on the edge, and I know defensively they’re mad. They’re ready to play and I love the pride about them. This field is about competition. I want them there, just reminding them to make sure that we’re making good decisions in-game, and not a decision that costs us 15 yards.”

The drill continued and Pili wrapped up Aca’Cedrc Ware after no gain. Jountti had a nice run. The play of the day came when walk-on Jake Russell, a high school teammate of Darnold’s, leapt over Ajene to make a catch downfield, much to the delight of the offensive players. The final play saw Marvell Tell outmuscle Trevon Sidney on a jump ball to make the pick.

Among the guests in attendance today were Dennis Thurman and former UCLA coach Terry Donahue.

“Injury-wise, you saw held Bubba Bolden out with that knee bruise. We’ll see where he is later in the week, but he’s doubtful for this game. And then Chuma [Edoga], you saw him early in the practice. We wanted to get him a pretty good lather, and then shut him down and get some cardio inside. He’s got a knee contusion that we’re monitoring on a day-to-day basis. We think he’ll be there for Saturday, but we’re going to ease him along this week after coming off that first game.”

Sam Darnold on his Saturday performance

“I felt worse about it than I actually played, and after I watched film I felt a little better. The game just felt weird, it was my first opening game here, it was a longer than normal camp. It was the worst I’ve felt after a start, actually I had one game like that in high school too.”

“The inside middle three guys were physical, the two tackles need to be more physical”

Deland McCullough on judging his tailbacks

Helton on the cause last week for the defensive alignment issues, gap issues and missed tackles?

“The first is alignment issues – not getting lined up quick enough or making the wrong call by an adjuster. The second thing, losing gap control, is the offensive lineman getting his hat placement faster than you got to that point. And then the missed tackles was just us not wrapping up and running our feet. When I go back and look at it there wasn’t as many missed tackles as I felt there were. It was more lacking the gap control and not getting lined up correctly.”

Helton answers question “Where were you in terms of physicality last weekend compared to where you need to be against Stanford?”

“Obviously, defensively, and you saw today, I thought they had their jaws set today – I mean, they’re mad, and that’s what you want. You want a defense that’s mad and ready to come to the park. I thought offensively, and when I look at the physicality in our run game, I thought we were closer to where we want to be. You know, when you look up and you’re rushing for almost seven yards a carry, that’s what you want. And like I said, balance of our offense is key, and that rushing game is imperative to take the pressure off Sam and some young wide outs, and that’s our benchmark. Every game we’re hoping for 200 yards or more, and you’re right in the 232 range there. That’s where we want to be. So, probably closer on offense, and I know our defense understands that we need to get better this week.”

Helton answers question “Why did you run so much Nickel against a team like Western Michigan?”

“Primarily because of the three wides. You see the three wides in a game, and Clancy is known for matching that up and making sure that you don’t have an Uchenna or a Wole matched up on a slot receiver in that defense. So, he’ll match up a nickel, sometimes he’ll play base. In that game, he had the game plan playing nickel.”

Helton answers question “Were the two down linemen kind of overmatched against WMU’s offensive line?”

Last week, I give credit to him, he’s probably 85-90 percent going in. I know he always tells me, ‘yeah coach I’m 95 [percent],’ but when you look at him, he wasn’t all the way, but goshdangit he goes out there and helps his brothers. He really did some nice stuff in the perimeter blocking. The outside zone that Ronald [Jones] scored the big run on, was primarily him. There goes hat placement and hat speed. He just captured the defender outside shoulder, and RoJo was just able to run right around it. But from a blocking standpoint I thought he did a wonderful job. Obviously, as he feels healthy we’ll integrate him more in the passing game.”

Having a chance to watch them over the last two-and-a-half days, it’s the same thing as usual – a very well disciplined, a very physical Stanford team under David Shaw. You know offensively they always bring their run game to the park. That’s what you’ve got to stop right off the bat. It’s an area of improvement that we must do from Game 1 to Game 2. I’m very impressed with both [Bryce] Love and [Cameron] Scarlett, what they were able to do against Rice. They provide a great dynamic, one being a true speed back, very hard to get on the ground with Love, tremendous out of the backfield. And then Scarlett kind of being a little bit of the power runner in-between the tackles. Quarterback-wise, it’s really good to see Keller Chryst back healthy. He’s a kid that we recruited out of high school out of Palo Alto. Great kid, great family and it’s great to see him back playing ball again after knee surgery. He did very well versus Rice. He kind of continued where he left off at the latter half of the season. He’s a kid that doesn’t make a lot of mistakes, manages the offense extremely well in their system, being able to check from one play to the other. He’s got a great arm, and he’s a very good player.

Skill-wise we’ve known Trent Irwin and [Dalton] Schultz for a long time. They do a great job, but it was interesting to see the two freshmen that came in with Colby Parkinson and Connor Wedington. You know, usually you see an older Stanford group go out there, and to see those two freshmen come out and make plays in that first game was interesting to see, and you can tell they’re talented kids.

Defensively, a very experienced, older bunch. All juniors and seniors coming back off this football team. They’ve always had the heart of the defense be where their strengths are, and that’s the nose, the MIKE and the free safety, and you look up and there’s Harrison Phillips, who’s a terrific football player, Sean Barton the MIKE, and [Brandon] Simmons at the safety. And then they’ve always had that great edge player, and there’s No. 34 [Peter Kalambayi] coming off the edge, which for six years now it seems like he’s been there. Peter has done an unbelievable job of providing pass rush for them.

It’s a great challenge for our football team. It’s a big game for us and I know as well as for Stanford this game has a lot to do with what happens in our conference later on in trying to get to a Pac-12 championship. So, an important game for us, both as a team and improvement-wise.