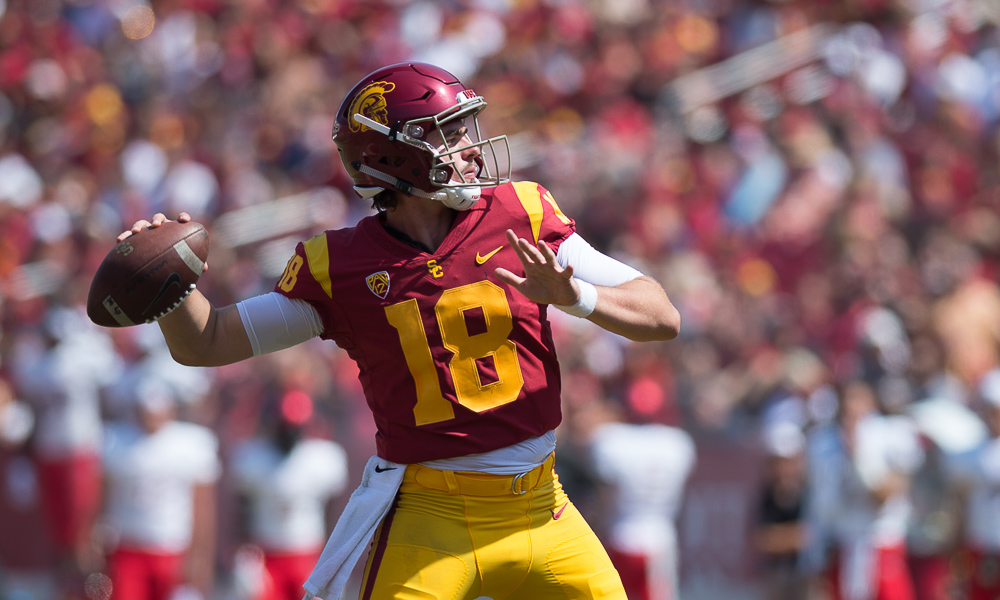 The practice today for the Trojans turned unexpectedly chilly by the end of the day, a sign that fall is arriving and it’s time for college football schedule to take it up a notch.

For USC, that means the annual early season match-up with Stanford, a game that in recent years has provided a measuring stick for both teams in terms of style of play and positioning for the conference title game. Last year the Trojans got the Cardinal twice, once in the regular season with a game that was arguably the best example of physical Trojan football that we’ve seen in years and once in the conference title game for the first Pac-12 title in 10 years at USC.

“We know each other so well,” USC coach Clay Helton said. “I’ve competed against them for 9 years and I think they have one of the better rushing attacks in our conference, but San Diego State did a good job of loading the box last week and they had to go to the pass. David Shaw has progressed quarterback K.J. Costello and their usual group of long and tall receivers and tight ends so they were able to put up big numbers throwing the ball too. It’s made them even more dangerous and hard to defend.”

The Trojan defenders spent extra time today on drills such as stripping the ball, getting off blocks from the WR’s and TE’s, and high pointing the ball when it’s in the air. There was, of course, some work by the service team simulating the Cardinal offense against the USC defense but Helton said there is only so much you can do to simulate Stanford Heisman Trophy candidate tailback Bryce Love.

“It’s hard to simulate 4.3 speed,” Helton said. “And Love runs with such patience. He believes in his offensive linemen, he’s explosive, is tremendous out of the backfield, and has patience like Le’veon Bell. Last season it was critical for us to have success stopping their run on first and second down, we limited them to under three yards, and that’s a big difference to have a bunch of 3rd and 7’s rather than 3rd and short because they are the best at making short yardage plays.

“It’s also going to be a good test for our secondary because they are a good jump ball team. You know the fade is coming at some point, and K.J is real good at giving his receivers the chance to make a play.”

For the Trojans, it will be interesting to watch how the offense comes together in this game. All 3 USC tailbacks are healthy and seemingly ready for more than was shown in the opener, particularly in the passing game. And with JT Daniels at the controls, there doesn’t seem to be any hesitation from the USC coaches to continue putting the ball in the hands of the true freshman who played with such poise in the opener.

“I expected JT to have a lot more jitters but that just wasn’t the case,” USC offensive coordinator Tee Martin said. “Going on the road for the first time he will need to manage the situation and not get caught up in the emotion of the game. Other than that, we’re familiar with them and they’re familiar with us. There aren’t too many secrets between these two teams.”

Daniels said it was good to have his opening game at the Coliseum and he has leaned on some of the veteran players to get a sense of what it will be like on the road for the first time.

“It was really fun to walk down the tunnel,” Daniels said. “That isn’t something you can know until you experience it for the first time. And I thought we played well, we were a hair away from a couple more touchdowns. I’ve listened to some of the leaders, guys like Marvell Tell, as they talk about what a huge week this is for us, they talk about the preparation and how important it is. “

According to Helton, the preparation from Daniels starting last spring is one of the keys that has allowed him to win the job as a true freshman, and to have the success he saw in the opening game.

“JT made a huge investment in spring to come here, watch practice, and he was serious about his business,” Helton said. “His strength and conditioning work, summer PRP’s, fall camp, getting in the playbook, it all paid off in week 1. But the road gets harder this week.”

Injury updates: Toa Lobendahn was back at practice and Helton thought he looked good. Palaie Gaoteote also returned to practice today and was pulled about halfway through as a precautionary measure. Liam Jimmons was limited with a back issue. Josh Falo is “getting closer”, according to Helton.

“It was special to see but not uncommon. It was one of those “you, you, you” calls where Velus could have taken it but Stephen came in, and Velus turned upfield to make two good blocks. It’s something we’ve seen in the past with guys like Woody (Robert Woods) and Nelson Agholor, where they take pride in physical blocks. The players really went nuts when we showed it in the film room.”

Helton on JT being a “normal kid”

“He’s still a kid and he does kid things. He’s got a real dry sense of humor, a guy’s guy. The players like that about him”

JT on being a kid

“I ride my scooter and go to class.”

Amon-Ra St Brown on playing against his brother Osiris, a Stanford receiver

“We aren’t really playing each other since we’re both offensive players. I’ve never played against him the entire time we’ve been playing football but I’ll probably go up to him before the game and wish him good luck. My parents said they will root for the USC offense when we’re on the field and the Stanford offense when they’re on the field.

“I know Vaughns and Pittman will shine, that’s who they are.”