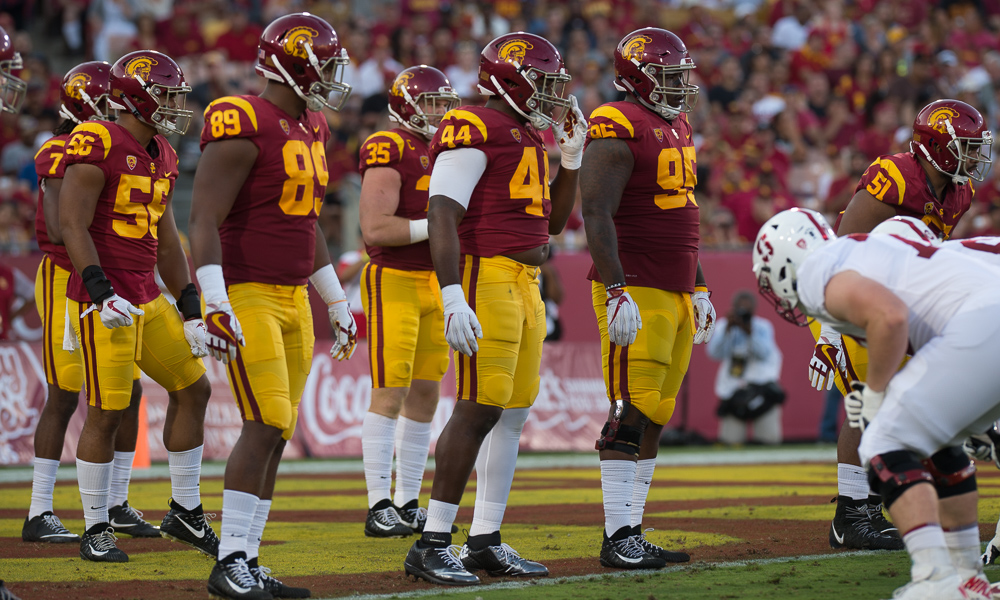 The Trojans continue preparations for the first road game of the year with crowd noise piped in at practice, and several reserves getting ready to play if called upon.

USC head coach Clay Helton talked about the challenges that come with the being on the road after three games in the comfort on the Coliseum.

“The fear is you’re bringing some young people, some redshirt freshmen and true freshmen in for the first time that have got to learn that transition for the first time, and thank goodness that we have the leadership that we do to kind of say, ‘hey, this is how we do thing here on the road’,” said Helton. “Today we worked mostly some of the adverse conditions that we can see on third down. Obviously, our first road game, so we filtered in some in-house crowd noise to be able to function there, as well as worked a lot of Cal’s pressures. I’ve been really impressed with the blitz package that they do each and every week. It seems to change based on your protections”.

One of the big plays with the crowd noise while the team was backed up came when Sam Darnold threw deep to Stephen Carr, the ball appeared to be overthrown but Carr was able to reach out and make the play. The situation with Carr could be interesting this weekend, especially if Ronald Jones is unable to go due to his quad injury. RoJo was limited on Tuesday, and didn’t get any work in today, so it’s possible that Carr could get called on to be the primary ball-carrier. Even if RoJo can go, it stands to reason that Carr could see his role increase in the passing game. Regardless, Helton has confidence in the freshman based on what he’s seen so far.

“He’ll be fine,” Helton said when talking about Carr. “He’s been somewhere in the 12 range right now, and is out here every day carrying a heavy load in practice. I don’t think he would have any problem with it.”

Helton also discussed his goal of getting balance in the offense. Last week saw the play-calling slighted in favor of the pass and it resulted in almost 400 yards through the air. Helton said he wants to exploit a weakness in the defense when it’s there, while figuring out ways to get the balance that he wants.

“I don’t necessarily want to throw the ball 52 times, you like to be balanced, but we got off script. We started slinging it around because of the loaded box, and we had to move the ball that way. If a team loads the box like Texas did you have to have the answer of being able to put yards in the passing game, like we did with close to 400 yards, and we left a couple out there too. I know Tyler [Vaughns] wishes that he had the touchdown in overtime. Velus [Jones] had an opportunity on a deep ball shot. But on a consistent basis to look up and have 400 yards passing, that’s was the kind of day it was, and there was still meat on the bone, to be honest with you.

“I thought Tee [Martin] did a really nice job. We had game-planned to be able to tag the RPO and the run game, basically perceiving that we were going to get a lot of zone pressure. And when you zone pressure, you create three receivers to one side, you basically have three receivers on two defenders until the free safety can get over the top and make the tackle. So, when you do that, whether it’s a quick game or RPO’s, you should be averaging decent yards. On that day the RPO averaged 12 yards every time we threw it out there. So, that’s what you want. Consider it a run, and if you’re averaging 12 yards a run, you’re happy. It was a big plus for us.”

Uchenna Nwosu, who was limited on Tuesday, was able to practice the whole day today, and he had a nice pass batted down at the line. We also saw interceptions by Bubba Bolden and Ykili Ross during service team periods, and Levi Jones made a nice play to track down Velus Jones in the backfield for a tackle-for-loss.

Steven Mitchell did not practice, and at various points we saw Deontay Burnett, Jalen Greene, Tyler Vaughns and Michael Pittman in the starting line-up.

Helton discussed his confidence in Chase McGrath after the walk-on freshman made a pair of clutch kicks against Texas, and how that might impact future decisions to kick or not to kick.

“I think as his confidence builds, which those two kicks build a lot of confidence, and you see his leg, you know, that ball could have been good from 50 and 55 to be honest with you,” Helton said. “He hit another couple out here today that I thought were exceptional, with great length. We were sitting at 43, and the ball was easily from 52, 53 and he made it. So, the more confidence he gains, and we gain in him, yeah, there will be those opportunities to kick long field goals. You know, he’s proven it in games.”

Among the guests at practice were former Trojan quarterbacks Jim Hardy and John Mazur.

Helton talks Darnold on final drive of regulation against Texas

He made some great plays, but I mean it goes back to your training and execution, and you not getting caught up in the moment. But all 11 kids on the field, I mean you look at it, you complete a dig, you get down after you get a first down, you spike the ball immediately to stop the clock, you identify a one-on-one matchup with Stephen Carr and a MIKE linebacker, you hit it with a great pass, got down, went ahead and spiked the ball. And then you hit another one. Three plays, we went from the 35-yard-line to the 13, and it gave us two shots at the end zone. Do they practice all the time? Yes. But at the end of the day they also have to execute it in that frame, and they did. So, credit to the kids. They did a great job.

On the play before the field goal, did you communicate to Darnold that if he completes a pass short of the end zone, you don’t have a time out?

Any time that we sprint, you saw it in the Rose Bowl too. There were seven seconds left in the Rose Bowl prior to halftime. We know that we can end up taking about five to six seconds on a sprint, so basically you’re going to carry the ball five to seven steps as a quarterback. On a sprint, if it’s not there, you throw it away. So, he put the ball in a place where it was us or nobody. There was eight seconds left. It took six to get rid of it. Two seconds on the clock, and we kicked the field goal. Great job of situational mastery by him.