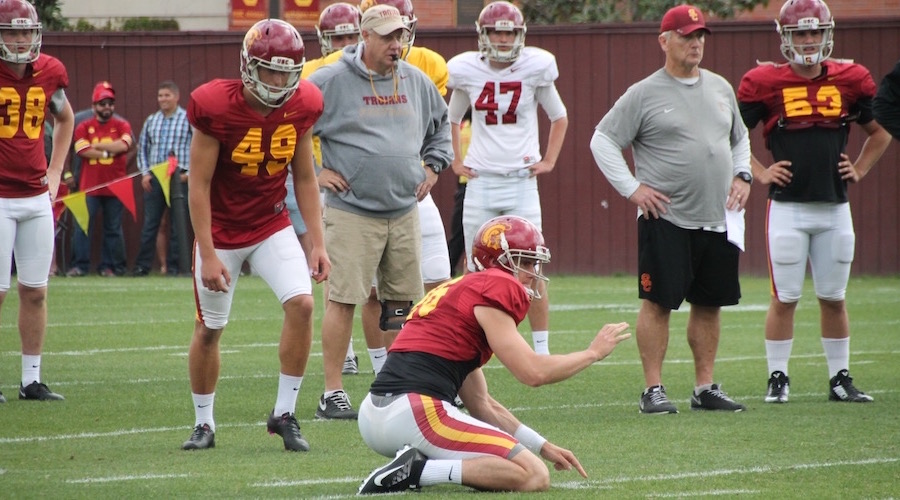 With USC athletic director Lynn Swann watching from the sideline for the majority of practice, the Trojans continued preparations for Washington State on Friday.

It’s not unusual for Swann to attend practice but this one felt a little different considering the state of the program and the way the Trojans have played, and lost, over the past couple weeks. Is there anybody reading this who wouldn’t love to know what Swann is thinking right now? He gives no public clues to what he thinks about the style of play, the physical standard that was so much a part of the USC teams that he played on, and so we can only speculate what is on his mind.

For Clay Helton and his program, the opportunity to quiet the noise that is circling these days begins with the game against the Cougars, one that will take place in the home confines of the Coliseum but will likely not feature a large crowd to fill the Grey Lady.

The fact that it is a short turnaround week means that the practice schedule was moved up and Helton chose to practice on Monday and today in shells (shorts and shoulder pads). Today’s practice featured a lot of third down emphasis, with Helton pointing out that the Cougars have 10 sacks in three games (albeit against Wyoming, San Jose State and Eastern Washington) and have attempted nearly 180 passes while only giving up two sacks.

The ability to get after the Cougars quarterback will be made tougher by the fact that leading sack-man Porter Gustin will be forced to watch the first half of the game from the Coliseum locker room as a result of a targeting penalty called against him last week against Texas. Gustin talked about the penalty and how he will spend his time in the first half.

“I’ll just try to stay warm, stay loose and keep an eye on the game from the locker room,” Gustin said. “I didn’t think, in the moment of the game, that it was a roughing the passer. It’s pretty clear I wasn’t trying to do anything intentionally dirty, but his helmet came off and they are being really strict on the rule right now.”

Hunter Echols will likely get first shot at filling in for Gustin in the first half.

Clay Helton said he watched a lot of film of the first three games “I like to self-scout, I stay in my office from 7 to midnight watching film.”

“One of the things I looked at when watching film of our first three games is our pass rush lanes to the quarterback, especially on the right side,” Helton said. “Their quarterback does such a good job of getting rid of the football, it’s staggering to have only given up two sacks with that many pass attempts. I was such a fan of Luke Falk and thought there might be a drop-off once he left but Mike Leach found a kid to fit his system.”

Special teams was a big point of emphasis today with a lot of punt team and field goal work. We saw both Reid Budrovich and Chris Tilbey punt following a stretch where both have had troubles with errant punts.

“We’ve got a situation where things have to get better,” USC special teams coach John Baxter said. “Is it confidence? It’s something. It’s a funky rhythm they’ve gotten into, and we’ve got to get in there and try to fix it. It’s why they put a C on our chest, to coach. Adversity introduces a man to himself and right now they need each other and they need me. We just have to try and work through it.”

We also saw both Michael Brown and Alex Stadthaus working at placekicker as Chase McGrath circled the field on a scooter following his knee injury on Saturday (he will have surgery in a few weeks). Baxter said that Brown, who had knee surgery early in the 2017 season, will be the placekicker on Friday and that Stadthaus (who currently handles kickoffs for the Trojans) will work on placekicking in case he is needed.

In service team work, two of the big plays on offense came on passes from J.T. Daniels, one to Amon-Ra St. Brown in the corner of the end zone against coverage from Dominic Davis, and a red zone scoring toss to Devon Williams.

Helton noted that Washington State has gone for it on 11 4th down plays so far this year.

Austin Jackson sat out today with sickness but should return tomorrow. We saw Clayton Bradley go with the 1’s at LT and Bernard Schirmer with the 2’s.

Ykili Ross was spotted leaving Galen dining hall after practice with other members of the team.

“They run what they run, they are really good at the passing game and staying on the field” – Helton on WSU offense