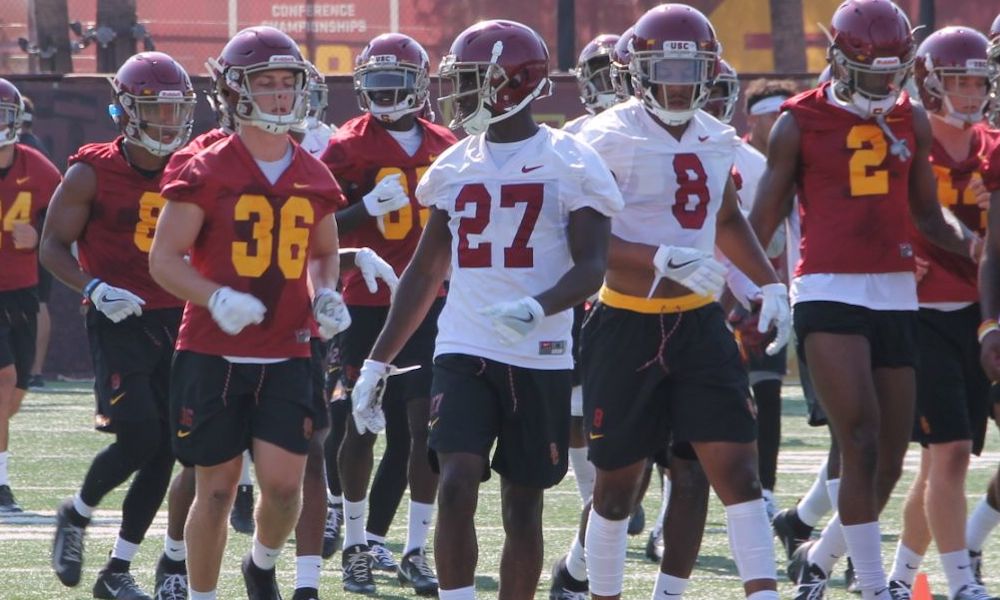 * Clay Helton was impressed with the intensity, energy, and team play at Monday’s practice.

* On a day that was sunny and mildly warm with a breeze, the Trojans were in helmets, shoulder pads, and shorts. The players were spirited and very vocal, and there was no sense of having just lost back-to-back games. The attitude was very good.

* The scout teams worked on both the Washington State’s offense and defensive schemes.

*The Trojans spend a good deal of practice time working on rushing the football, according to Clay Helton.

* Michael Pittman and Tyler Vaughns had a good day of receiving.

* The Trojans are expected to be in full pads on Tuesday.

Out of there: It was confirmed that senior starting outside linebacker Porter Gustin will miss the first half of the Washington State game due to a targeting ejection in the Texas game.

Injury report: Sophomore placekicker Chase McGrath will have knee surgery next Thursday and is out for the season. Redshirt freshman safety Isaiah Pola-Mao will have shoulder surgery and is also out for the season. Isaiah’s surgery will be on the same shoulder he had surgery last season. Sophomore offensive guard Andrew Vorhees is expected to start against Washington State.

Clay Helton on the offensive line: “They have a tremendous football coach in Neil Callaway. They’re very competitive people and they want to be good. I watched them today and I thought they brought the right attitude out here. They want to make a mark, make a statement and get better with each practice. I liked their attitude today.”

Clay Helton WSU offensive assessment: “Coach Leach after watching the tape brings a really good team in here to the Coliseum on both sides of the ball. I am very impressed with their quarterback Gardner Minshew what he’s doing right now throwing the ball around 58 times a game and completing 70 percent of his passes, 412 yards a game. He’s really getting the ball out nice and getting it out accurately. Offensive line is doing a great job, and they’ve thrown almost 180 balls and only given up only two sacks. That leads me to believe great decisiveness at the quarterback position to get it out on time. Wideout wise, they’ve got some great wideout in Mark (James) Williams, (Jamire) Calvin, and (Dezmon) Patman.”

Clay Helton WSU defensive assessment: “Defensively, they do a really good job, in my opinion, of mixing up the fronts of going 3-4 to over to under to jam, so us and our communication will have to be important. There’s a lot of stemming from one front to another on being able to diagnose that and being able to make the right calls, it’s going to be imperative. Because of that, they kind of have always one extra man in the box, and they’ve only given up 98 yards worth of rushing right now. In the back end, they’re playing a lot more man, you can tell the confidence they have in the back end. They’re only giving up about 137 yards passing a game for a total of 236 total defensively, so they’re doing a really nice job.”

Drevno speaks: On the current state of Trojans football, running backs coach Tim Drevno said, “Everybody has their fingertips on end, everybody has to fix it, and I have to do a better job of coaching the running backs. That’s what I am here to do is coach the running backs. Get them to understand the point of attacks and what their reads are and hold on to the ball. We missed assignments and miscommunication on the goal line (Stephen Carr’s run around the right side that was thrown for loss). You get in a place like that with 103,000 and for some of those guys it was their first time standing out there. It’s a beehive and we’re going to be better because of it and we’re going to communicate better, and guys are going to be more callous because of it. We’re going to be able to operate in those types of situations. I thought today’s practice was awesome.”

Tyler Vaughns: “We try to bring the same thing to the games that we do in practice and get better. The positive thing is we put one 300-plus passing yards on Texas, but the negative thing is we rushed for 15 yards. We know we can throw the ball and everything like that, but we have to get our running game going. It starts with us communicating and missing no assignments.”