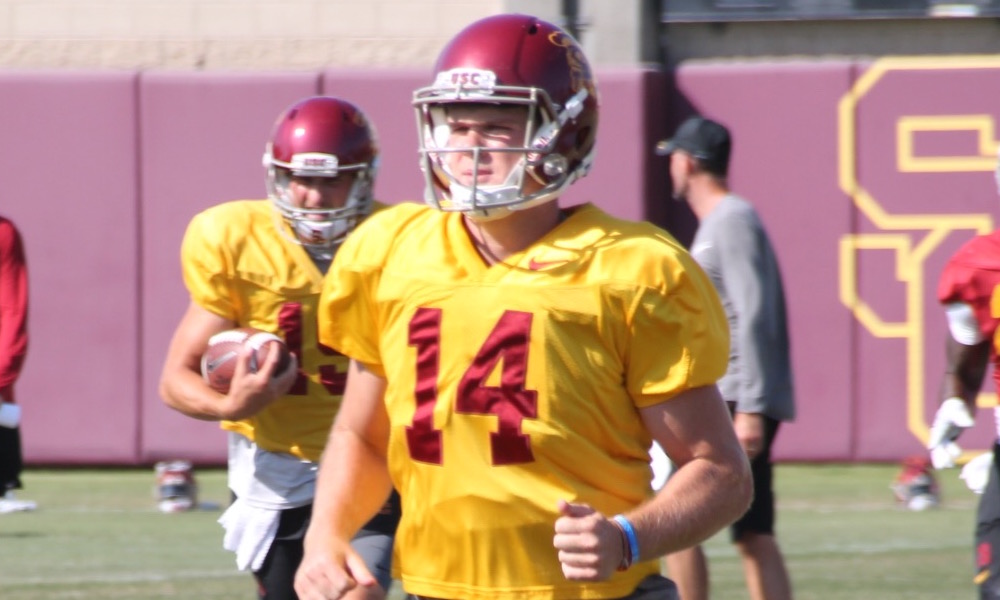 Fresh off the heels of a huge 42-24 victory over Stanford, the 2-0 Trojans were back out on Brian Kennedy-Howard Jones Field on Tuesday preparing for their next test – Texas.

Despite the Longhorns’ 1-1 record and lackluster performance in their season-opening loss to Maryland, it’s apparent that USC head coach Clay Helton has plenty of respect for Tom Herman’s team.

“Personally, I think this team under Coach Herman is going to be a sleeping giant,” Helton said, “one of those teams that is going to get better and better each and every week.”

Coming off such a big win for the Trojans, which followed an intense week of practice, Helton said that a major point of emphasis has been placed making sure that there is no let-down this week. And if Tuesday’s full-pads practice is any indication, any such fears can be put to rest as the team came out with energy and appeared to be zeroed in on the task at hand.

“I really like how this team came out today and practiced,” Helton said. “It felt like last Tuesday, they’re here for a purpose. We talked about how this game is so important for a lot of reasons, for our fans, and for our football team it’s a huge step forward in our season. We talked about starting fast in September and this is that next step.”

Picking up where he left off on Saturday, Trojans quarterback Sam Darnold was particularly sharp. Showcasing outstanding accuracy and his trademark playmaking skills throughout the practice, the redshirt-sophomore kicked things off on a high-note, finding Deontay Burnett down the seam for a 30-yard touchdown in the first 11-on-11 period, before capping his day off with long touchdown passes to Tyler Vaughns, Trevon Sidney and Erik Krommenhoek in the final team period.

Darnold’s scoring toss to Vaughns was particularly impressive, as he rolled right to evade pressure before throwing a perfect pass on the run to Vaughns deep down the sideline.

The defense came up with some notable highlight plays as well, with Uchenna Nwosu dropping Reuben Peters for a loss early on, and Greg Johnson intercepting a Jack Sears pass.

“Injury-wise, we held Chuma [Edoga] today for that wrist that he fell on. We held John Houston today, he had a stinger in the game and had some neck stiffness. Porter (Gustin) is inside doing rehab on a shoulder, and a toe. I’ll give you more information on that as the week goes along. And then obviously Daniel (Imatorbhebhe) was out trying to improve that hip/groin area.”

– With Edoga sidelined, Andrew Vorhees spent the entirety of practice with the No. 1 group at right tackle.

– Jordan Iosefa spent the day with the first-team defense at the WILL inside linebacker position in place of Houston.

– With Gustin sidelined, Connor Murphy spent the day at the predator outside linebacker spot with the No. 1 group.

During a brief field goal period Reid Budrovich kicked alongside Chase McGrath, with Helton acknowledging afterwards that in addition to being the Trojans’ starting punter, the St. John Bosco product is also now the team’s back-up placekicker.

“We have Reid Budrovich, who is our punter, but who has also worked with kickoffs and field goals the last couple years,” Helton said. “He’s our back-up right now, and doing a nice job. He’s more than adequate to do the job if needed.”

Among the guests in attendance on Tuesday were USC President Max Nikias, as well as former players Shaun Cody, Jim Hardy and Anthony Munoz.

“Looking at last week I think they kind of found their identity rushing for over 400 yards, with Warren and Porter, and I thought they did a good job incorporating the wildcat. They have one of the best offensive tackles in the country, and an athletic line overall.

With Shane (Buechele) and Sam (Ehlinger) they are pretty similar guys. They can both spin it and they have the athleticism to move the chains so I don’t think you need to have two different game plans. At wideout I’ve been impressed with Foreman and Collin Johnson, Foreman is a speed guy they use on speed sweeps and to get downfield, Johnson is a bigger body, a 6-6 kid we recruited from Northern California who really knows how to use his body on slants and fade routes.

Defensively, have a lot of respect for Todd Orlando, one of the bigger pressure guys in the country. The bigger the game, the more blitzes you can expect to see. We watched what he did last year against Oklahoma, against Louisville. Personally, I think this team under Coach Herman is going to be a sleeping giant, one of those teams that is going to get better and better each and every week.”

“First off, he plays in the other team’s backfield, and he’s as good of a pursuit guy as you’re going to see. Ultra-athletic and he’ll be a challenge. He lines up on both sides so both tackles will have a task.”

“I really don’t have a crystal ball on this one. It’s a strange injury, and at that position you need to change direction blocking and running routes. It just doesn’t feel right so we’re going to shut him down until it’s 100% right, so he’s going to rehab whether that takes one week, two weeks, four weeks, a season, we just don’t know. It kind of reminds me of when John (Houston) had his back we made the investment to get him 100% right. We’ve got great doctors, great physicians who will work to get him back as soon as they can.”