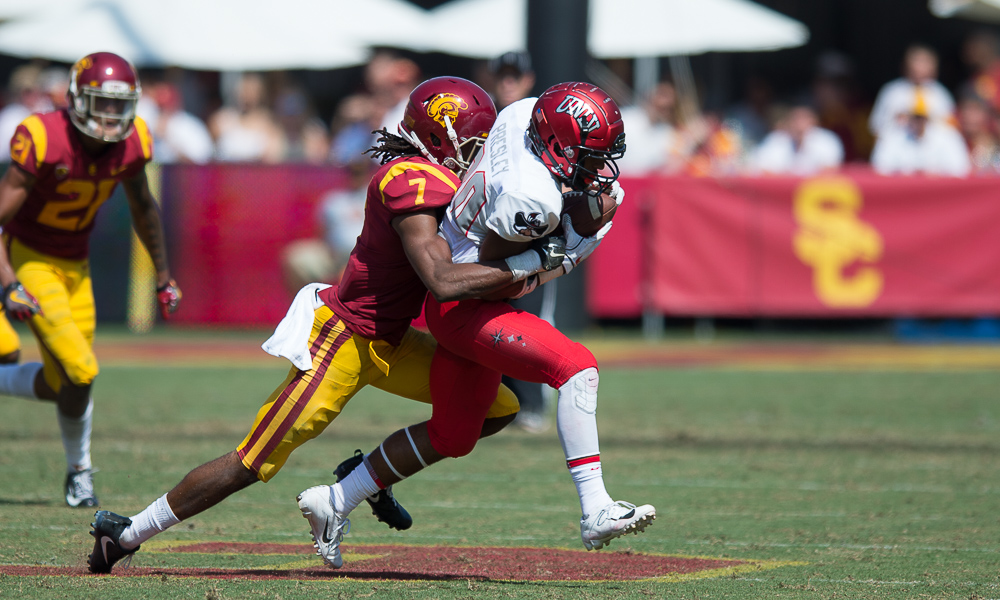 It was a shorts and shells workout for the Trojans on Wednesday with a lot of emphasis on the area Clay Helton feels is the strength of the Longhorn defense, the ability bring pressure from a variety of ways, particularly on third downs.

“We struggled last year against their zone pressures and they are one of the best in the country so far holding teams to 28%”, Helton said. “We got in some extra work today, we worked with crowd noise, and the one thing you know is that they are going to bring something different than what they showed in the first two weeks.”

Helton was asked how concerned he was about the play of his offensive line so far and his response was “not very concerned, I think they’ve played good in the run game, I’m proud of what they’ve done to move people around, now we need to get healthy and continue to improve.”

Chuma Edoga missed practice today with a stomach issue but is expected to be back tomorrow.

Defensively, there is a lot of attention being paid to the safety spot, where the Trojans will feature a 3-man rotation this week with Marvell Tell, Talanoa Hufanga and C.J. Pollard. Chase Williams was moved this week from corner to safety but he is not expected to play a role in this game.

Hufanga took the first team reps today and is expected to be the starter on Saturday.

“Talanoa can get the ball on the ground,” Helton said. “He has such good instincts, he made a great play on a pick today. I told him and C.J. to just do their job, don’t try to do too much, they have 10 players around them who are ready to help and support them.”

Helton said one of the keys in this situation when you have a new player stepping in is communication, and the leader in that area for the secondary is Marvell Tell. In the Clancy Pendergast defense there are so many switches based on zone or man calls and Tell is very good at that.

“One of the most important things when you are the communicator is that you need to know the whole concept of the defense,” Helton said. “We started to see that from Marvell last year and now he handles it so well.”

Among the highlights from practice was an interception by Olaijah Griffin off Matt Fink in service team. J.T. Daniels hit Velus Jones with a short touchdown, and had another completion to Jones in the flat against good coverage from Ajene Harris. We saw a lot of field goal work (including snaps from Jake Olson) and downing punts inside the 20.

Does Cameron Smith have any advice for the offense?