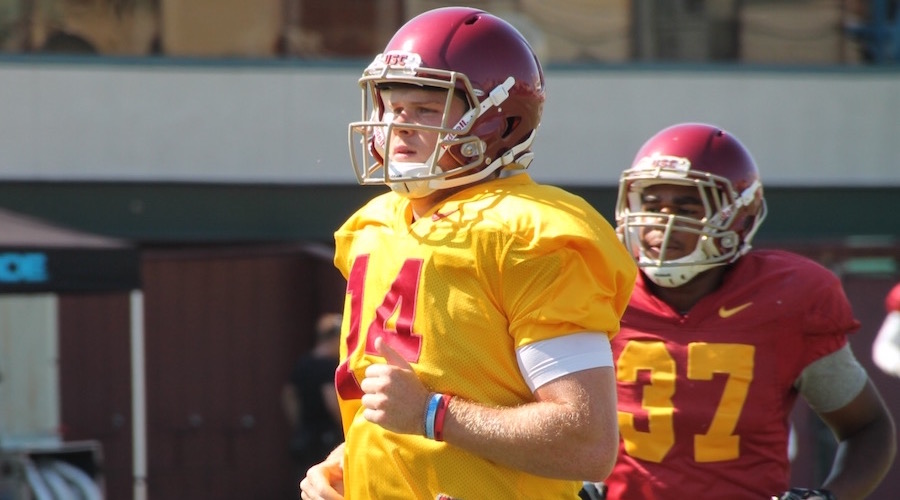 After a light Monday workout, the Trojans were back in full-pads for fall camp practice No. 8 on Tuesday, taking part in a lengthy session marked by some intense play, as well as more situational work.

The practice featured plenty of highlight-reel plays produced by the offense right from get-go, particularly from the Trojans running back corps. Ronald Jones II, Stephen Carr, Vavae Malepeai, Aca’Cedric Ware and Dominic Davis all got plenty of work rotating in at the tailback spot throughout the day, with Jones and Carr both making a big statement during an early team run period.

On the very first play, Jones took a handoff to the right and then burst through a hole and really showed off his speed as he picked up close to 20 yards. A little later it was the freshman, Carr, who got in the act, bouncing a run outside with a nifty cut and taking off for a 25-yard touchdown.

Carr, who also scored a pair of touchdowns this past Saturday in a scrimmage-like setting, has really grabbed everyone’s attention in a hurry, and the early performance of the running back unit as a whole bodes well for Sam Darnold and the entire USC offense.

“My biggest fear is always you have a really, really special quarterback but at some point, and it happens at every level, the quarterback is going to have an off day,” said USC head coach Clay Helton said. “If you don’t have a running game to take the pressure off him, it makes it hard and maybe you end up losing a game you should have won. As we got to the end of last season, and I think our team feels this, when you go out and you run the ball for 200 yards per game, and throw it for 300, it’s such a balanced attack and it really helps Sam (Darnold) get some advantageous throws with some man coverages, some loaded boxes, some one-on-one opportunities.”

And speaking of Darnold, the Heisman candidate put together a strong practice of his own, spreading the ball around the entire field. His day included a beautiful 25-yard touchdown pass to freshman tight end Erik Krommenhoek in the final 11-on-11 period.

After an up-and-down first couple days of camp, Darnold has shined on a consistent basis as of late – just as everyone expected.

“After the first couple practices he’s really settled in, protecting the football, I think he’s gone four practices in a row without giving it to anybody,” Helton said. “He’s getting the ball out on time and extremely accurate. I’ve had Matt Barkley, I’ve had Cody Kessler, guys who were in the system for so long and when it’s those early practices, when you’re hearing the same terminology over and over and over again, there’s something about those guys when it’s time to perform, they turn it on. His discipline, about practice 4, is when he really started honing in, to say I’ve got to take this one rep at a time.”

Also on the offensive side of the ball, tailback Dominic Davis broke off a long run during an 11-on-11 period, receiver Velus Jones made an impressive over-the-shoulder catch over Ajene Harris during one-on-ones, and freshman wide out Joseph Lewis had an outstanding catch on a deep ball along the sideline during the same period despite tight coverage by Jack Jones, with the sophomore cornerback dishing out a compliment to the youngster as a result.

“That’s a heck of a catch,” Jones said to Lewis.

As for the defense, MIKE linebacker Cameron Smith made the play-of-the-day, dropping way back into coverage – a good 25 yards – before jumping in the air to bat a Matt Fink pass away that was intended for Velus Jones. It was quite a sight to see the big 250-pound junior cover that much ground so quickly.

While the majority of practice was up-beat, it ended on a definite down-note for the team as they were forced perform a number of disciplinary exercises – including push-ups, sit-ups, planks and up-downs. Helton would not discuss the reason for the punishment.

“Typical of any team, at some point you have team discipline, and that was that time,” Helton said. “I’ll leave it at that.”

“It was good from a health standpoint today to get Viane (Talamaivao) back, to get him some work, he got to get through the team run today. Good to get Matt Lopes back into some action today. We pulled Deontay (Burnett), he’s got a couple sore ankles so we just wanted to take some reps off.”

“We’re going to end up scrimmaging this Saturday and next Saturday, kind of the same way we did last Saturday, with anywhere from 50-60 plays, try to get some tackling. When we go into the mock game it will be more situational. If we stay healthy we figure we’ll get two really good more scrimmages in.”

“I’m just hoping he gets better every day, physically and mentally, and in the playbook. He’s one of those guys, I love him to death. You have two knee surgeries as a big man, that’s a hard thing, especially at that position. You can see how hard he’s trying to get the rust off, to get back in the playbook, to learn it. I hope he gets in the position where he can be a contributor for us. He’s at a position where there are several talented guys, with Marlon, Brandon Pili, Josh. That’s a really good stable of nose tackles so we’ll see where things are at in about three weeks.”

Former Trojans players in attendance included Justin Davis, Shane Foley, Jim Hardy, Khaled Holmes and Curtis Conway – the latter of whom was part of a large Pac-12 Networks crew that was on hand.