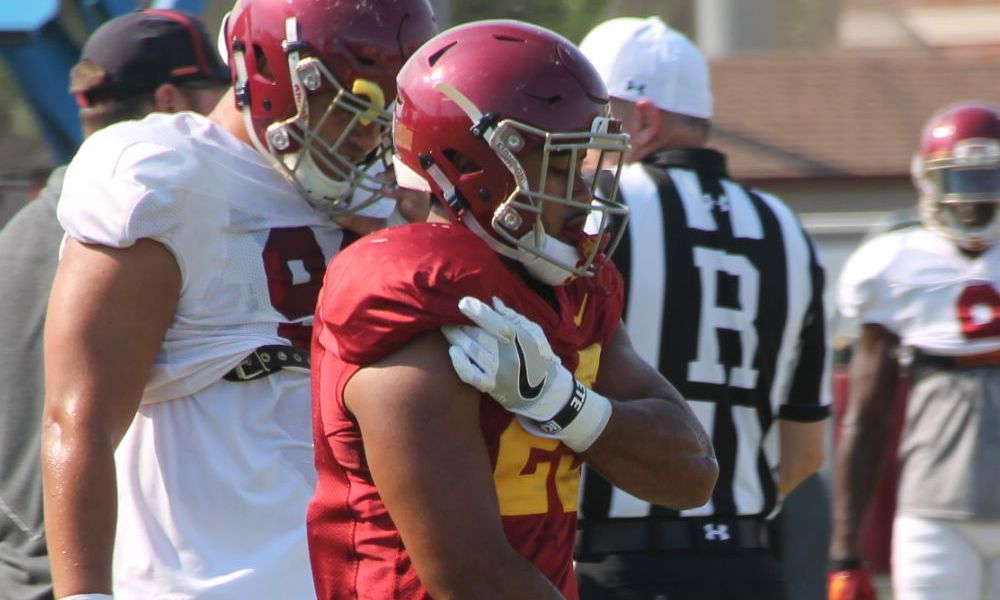 The full pads were on for the first time in fall camp for the Trojans and we were treated to a very physical 20-play run period, in addition to some red zone and goal line work.

“It fired me up to see some good running,” said Clay Helton. “To go 20 runs in a row without any turnovers, I was really proud of the backs today. We’re going to need that running back by committee with everybody contributing. I also liked the way the QB’s operated in the red zone.”

The highlight to me was a 45-yard touchdown dash by Stephen Carr off the right side through a huge hole created by the offensive line, and Carr gave a little point at C.J. Pollard giving chase as he crossed the goal line. The point may have drawn a taunting penalty during a game but considering that was the first scoring run Carr has had since coming back from his injury it was certainly understandable. Stephen also had a pair of touchdown catches later in the day.

“It was really good to see Stephen today, he didn’t look tentative at all,” Helton said.

There was another highlight run by Vavae Malepeai (photo above) that was actually a tougher run, as Vavae had to break an initial tackle attempt as he headed to the right, then he cut back to the middle where it took multiple defenders to eventually bring him down after 20 yards.

Aca’Cedric Ware had started the run drill with a pair of short runs. Vavae took a pitch and was met first by Kana’I Mauga with Bubba Bolden coming in to finish off the play. Malik Dorton stopped a short Carr run. Sears pitched it to Carr to the right with Marvell Tell driving him out of bounds following a short gain. Connor Murphy tackled Carr up the middle for no gain, and then Markese Stepp was met by Marlon Tuipulotu and Jay Tufele for no gain. Stepp then had a very nice play where be broke a tackle attempt and got down the left sideline for a long gain. Hunter Echols chased down Ware from behind for a TFL. Ware broke a tackle attempt by Bolden to get seven yards. Palaie Gaoteote stopped Vavae for a one-yard gain. Vavae broke a glancing tackle attempt by Bolden and leapt over two defenders for a 10-yard gain. Carr had a sweep to the right and Mauga tracked him down from behind. Stepp had a short run where he ran hard through the line before being tackled by Jacob Lichtenstein and Raymond Scott.

Gustin injury update: According to Helton, Porter has a minor meniscus tear and will undergo surgery on Thursday. He called it a 2-4 week recovery, maybe five. There was no ligament damage. Gustin watched the entire practice and Helton said he had no problems being on his feet for that time. Kana’I Mauga is working in his spot with Jordan Iosefa currently needed at ILB with Cameron Smith out, and both Hunter Echols and Juliano Falaniko are available as well.

Flags: There were officials present for today and a few flags on the OL (false starts) and Helton said that’s why they have officials there.

More snapping issues: The last few days have seen some errant snaps from Toa and he was pulled today after one (he had two total today). Helton said “we’ll get it fixed. He’s getting a little better each day, and there were only two today. It’s why we have 25 practices and today was only day 5.”

Chase McGrath update: Helton said Chase is battling a groin issue so they are being cautious and taking advantage of the situation to get Michael Brown some work. Brown had suffered a knee injury early last season but has worked his way back quickly and Helton said he was “perfection today”.

Trojan Marching Band appearance: The band was present at the start of the day to entertain Salute to Troy patrons and Trojan Club summit attendees who were watching practice from Dedeaux Plaza.

Line-ups for run drill were as follows: 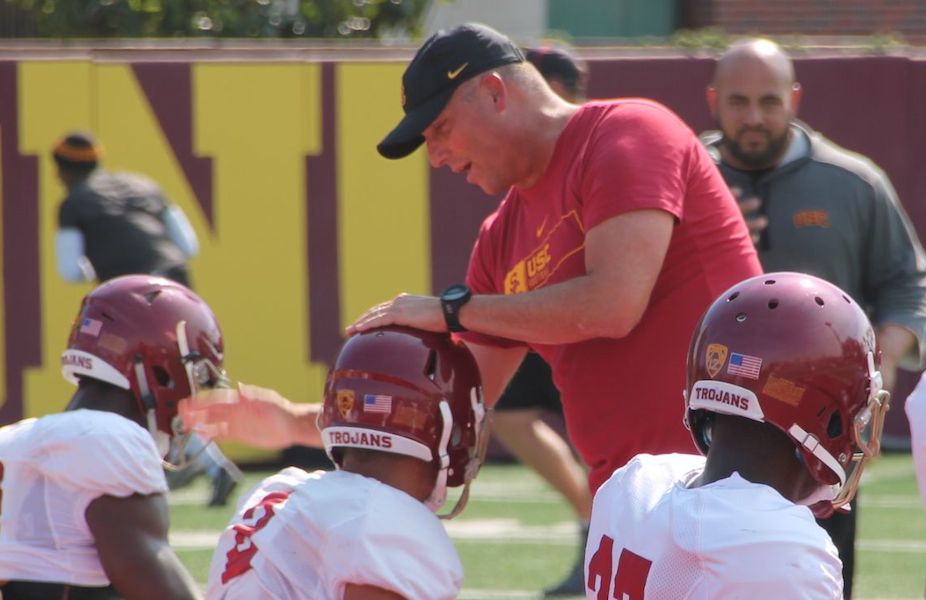