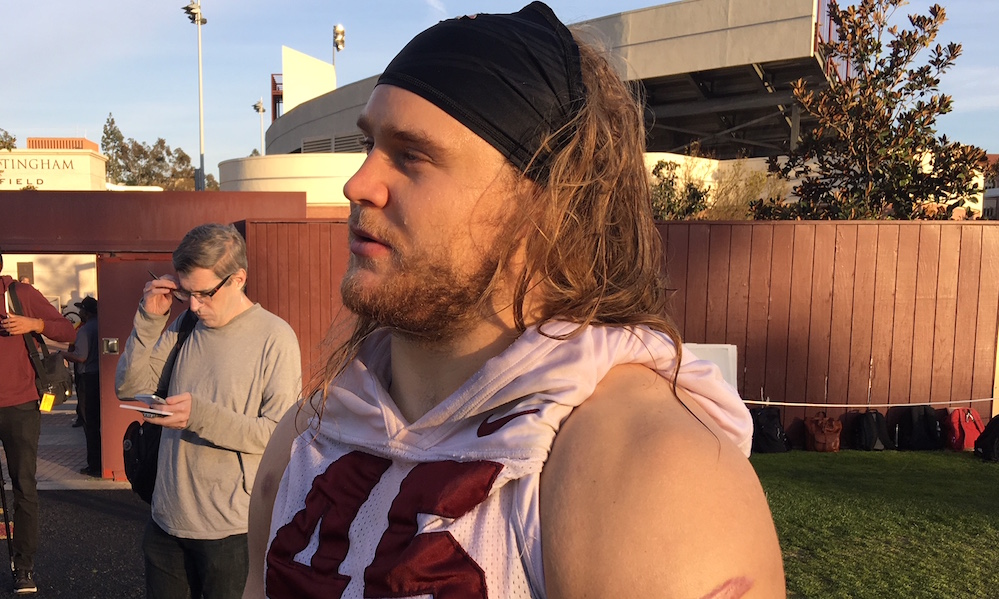 It’s always a tough situation whenever a player goes down in practice, especially in the time you need to wait to find out if the injury is serious or not.

Such is the case right now with USC outside linebacker Porter Gustin, who left practice after going down during a team run drill with what appeared to be a left knee injury. Gustin had to be carried off the field with Connor Murphy and Aca’Cedric Ware under each arm. When he got to the sideline Gustin was looked at by team trainers and doctors while he lay on the ground and they looked at his knee, he tried to get up at one point but he couldn’t put any weight on the leg and quickly laid back down. It wasn’t long before the trainer cart came and took him to the locker room.

“Porter left with an injury and we’ll have an MRI done tonight to get the status,” USC coach Clay Helton said. “The knee seemed stable when the doctors looked at it and he felt no pain, so we’ll wait for the MRI before we start guessing. It’s a tough situation right now, Porter is a real team leader and I don’t know of anyone who worked harder to get ready for the season.”

As far as the rest of the practice was concerned, there was a lot of red zone work and Helton said he noted that the offense had 16 plays and wasn’t able to get the ball into the end zone, and he said the DB’s in particular shined. There were a pair of interceptions from Iman Marshall (a pick-6 off Matt Fink) and Greg Johnson (off Jack Sears) along with a practice ending pair of pass break-ups by Jonathan Lockett against Devon Williams on both plays.

In the earlier team run drill we saw Stephen Carr open things up by getting outside to the right before Palaie Gaoteote shoved him out of bounds. JT Daniels tried to hit Michael Pittman in the end zone but Marvell Tell had a nice play to bat it away. In an odd play we saw Daniels make a throw that was tipped in the air and LG Chris Brown caught it and got to the two-yard line. Daniels tried to hit Amon-Ra in the end zone but C.J. Pollard knocked it away.

As the team 11-on-11 drill got ready to start we saw Cameron Smith slap hands with each member of the defense to get them ready. Kana’I Mauga was in at OLB in place of Gustin. Fink hit Tyler Vaughns with a short pass and Isaiah Langley was able to rip the ball away for an incompletion. Sears threw basically a jump ball to Vaughns against Langley, Tyler came down holding the ball with one hand but when he hit the ground it fell incomplete.

In the red zone drill we saw Sears have a pass batted down at the line. Daniels hit Tyler Petite with back-to-back passes. Marlon Tuipulotu came in for a sack.

Roster addition: Helton confirmed that OL Bernard Schirmer from Mt. SAC will be added to the team for this year, with three years to play three. Helton said they were aware of his on-field incident from several years ago and that they vetted him for three months, and what they found was that he was a “great person and a great student”, who also has a sister playing volleyball for USC.

Other injury updates: Chuma Edoga and Jay Godfrey were held out of practice due to hip soreness. Cameron Smith and Ykili Ross continued to sit out due to hamstring tightness. Levi Jones is out with chest swelling.

Schedule update: Tomorrow (Wednesday) will be the first day in full pads and Helton said there will be “heavy” run game work along with a mini-scrimmage at the end where he will just “let them play football” with the coordinators calling the plays.

New analyst added to staff: Helton confirmed that former Dallas Cowboys coach Dave Campo has been added to the staff as a defensive analyst, he is not allowed to coach the players or be a part of game planning but he can look at film, be on the field for practice and serve as a helping hand to the coaches. Campo is Clancy’s mentor and there is a lot of trust there, in addition to Campo being one of the better DB coaches around.

Clancy Pendergast on what he wants from his players “We want smart, tough, competitive players and we want them to be physical”

Helton on QB competition “We’re trying to get each guy 4-5 plays in a row so it can feel like a series, to get into a rhythm. I want to let it flow on Wednesday and Saturday even more and hopefully we can see some drives to help make good judgments on their progress. These are going to be two big days for those kids”

Helton on Daniel Imatorbhebhe “He’s not 100% but he’s getting closer. He’s been cleared by the doctors and now it’s a matter of him being comfortable out there. As he gets more comfortable and feels stronger, hopefully soon, he can get some real work.”

Kenechi Udeze on Caleb Tremblay “He’s making some good progress because he knows what we want from him now. Everyone wants kids to come in and play right away but it doesn’t always work like that. When Caleb was here in spring he had no idea what we wanted him to do so it was a transition, now he’s more comfortable and you see him going out there and he knows what to do.”