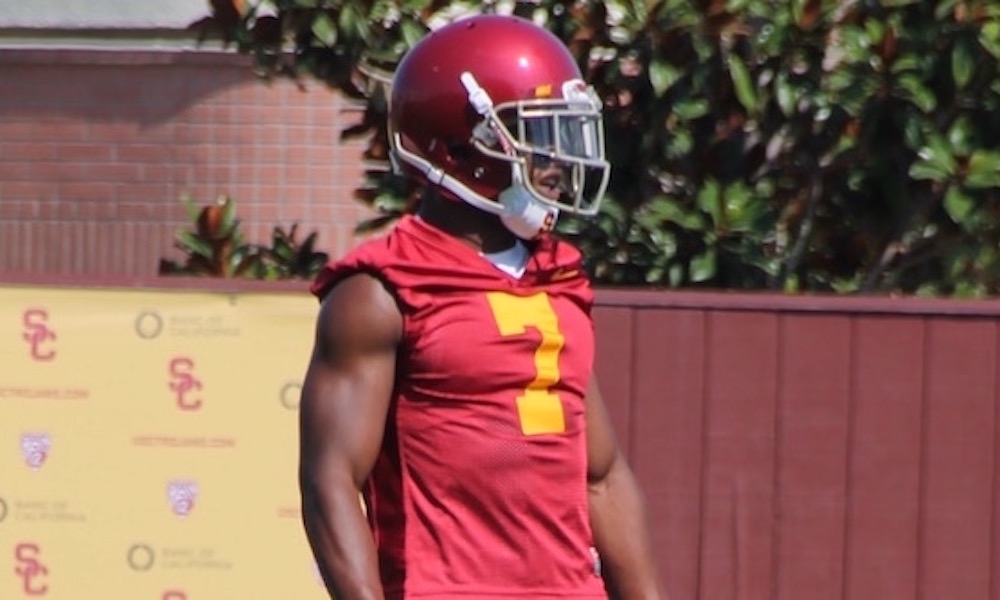 It was the first full days of pads with contact and it was also the first day of fall where the offense won the day, thanks to some big plays from Sam Darnold to Deontay Burnett and Velus Jones, and some impressive running from Stephen Carr and Vavae Malepeai.

“A good day at work,” USC coach Clay Helton said. “Second day in full-pads, and really a day that we really needed to get some tackling in, to get some real live scrimmaging, and just see the reality of where we are. We gave RoJo [Ronald Jones] just a little bit of limited work. He got a heavy work day yesterday, but we really wanted to see those next guys up. We kind of expected the runners to run well, and they did, especially you saw Stephen Carr bring some explosiveness to the table, and really make some explosive runs.”

The performance by Carr was fun to watch, with a pair of touchdown runs and another one that was called back. His first touchdown (from just outside the 10-yard line) was the best in my opinion, as it showcased the vision and cutback ability that helps make Stephen a special back. He took a handoff and started to go left but planted his foot before he got to the line of scrimmage and went right, where he got to the outside of the defense and scored. His second touchdown was a play where he ran off left tackle and scored but the play was called back for a hold that he didn’t need to get into the end zone. It was one of three touchdowns called back due to penalty for the offense. His third touchdown also featured an impressive cutback, this time to the left.

“I think Carr’s got great vision,” Helton said. “He reminds me a little bit of RoJo – that I have no idea where he’s going. But those special players like a Ronald Jones at running back, like a Sam Darnold at quarterback, they see things that others don’t. His ability to put one foot in the ground, change direction with what he sees – he makes full-speed decisions, and you’re looking at a 200-pound man that is extremely explosive. You don’t see a crossover move as we like to call it in basketball, where you chop your feet. He truly puts one foot in the ground and is able to transition in another direction. A really good day by him.”

Malepeai was solid especially with some bruising running near the goal line.

In the passing game, Vaughns got things started with a reception from Sam on the first play of the scrimmage situation (team ran about 55 plays total). Sam connected with Burnett on a pair of catches, and then Matt Fink hit Velus Jones with a long touchdown that was a zipped throw from Fink and a burst of speed from Velus. Steven Mitchell had a tough catch against double coverage, Randal Grimes caught a slant, and then Vaughns had the catch of the day by going up high in the corner of the end zone to bring in a pass from Darnold. It was good to see Vaughns make that play after he had collided with Jamel Cook a few plays earlier, Tyler was down for a brief time and then got up, and came back to make the big play.

“You saw the confidence that 14 [Sam Darnold] has in Deontay [Burnett], to be able to hook up, especially in the red zone, but what I was pleased with was to see Velus [Jones] make a huge play in that scrimmage, as well as Tyler Vaughns,” Helton said. “To step up in that type of atmosphere, a competitive atmosphere, and make plays was really good to see.”

As for the defense, Uchenna Nwosu batted down a pass at the line. Hunter Echols had a sack on Jack Sears. John Houston stopped RoJo after a short gain. Ajene Harris tipped away a pass along the sideline, and Isaiah Pola-Mao tipped a pass a few plays later. The defense also swarmed Carr on one run to force a loss.

There was a lot of kickoff coverage work done today.

Among the guests in attendance were Michael Hutchings, John Jackson and Marvin Pollard.

“It was by far the best practice of fall for Sam Darnold, no question” – Clay Helton

“Injury-wise, we kind of held Marvell Tell with a little bit of a tight hamstring. There is no pull, but he got tight. And they got really good news on Josh Falo – no structural damage in his knee. He has a pretty good bone bruise that will take probably a week or so to get right. That will be a day-to-day thing. So, really happy with that. Tyler Petite got a little dinged, so we went through concussion protocol just to be safe. He wasn’t feeling all that great today, so we held him back.”

Helton on referees being at practice

“It was also great to have our referees out here today – Pac-12 referees – and get the reality of, you could see it on tape, that we’re a poor hands team right now out on the perimeter. We’ve got to be better. You saw about a half dozen flags out there from just not having our hands in the right place, and that comes with young people – we’re teaching them technique and fundamentals. Thank goodness we’re only in Practice 6, and we’ve got 23 to go. But for the first week of work, a really, really good week. I’m proud of the way that they competed.”