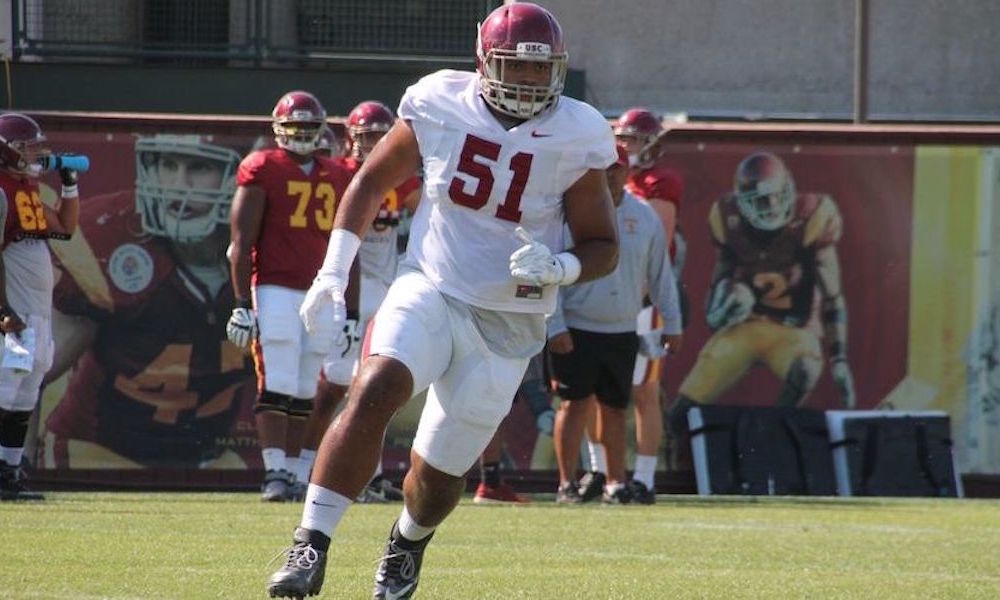 The Trojans put on the full pads for the first time in fall camp but it wasn’t a huge contact day with defenders not bringing ball carriers to the ground. Instead it was mostly situational red zone work with the full contact being saved for the Saturday practice tomorrow.

That isn’t to say there wasn’t any contact. The first big pop came courtesy of the freshman safety duo with Isaiah Pola-Mao creating the initial thud on walk-on running back Corbin Jountti and then Bubba Bolden finished him off. Christian Herrera had a hit on Jalen Greene, and Jamel Cook had a solid tackle to stop a ballcarrier short of the goal line.

Other big plays in the red zone work (ball placed on the 10-yard line) included Jackie Jones and John Houston getting stops on the first two plays before Trevon Sidney got the offense on the board with a touchdown catch. Jalen Greene had a ball thrown his way and he was interfered with but no call since there were no refs at practice, so Jalen removed the towel from his waistband and threw it in the air. Greg Johnson had a pretty pass break-up, and then Randal Grimes caught a touchdown pass but was called for pass interference by the coaches. Regardless of the penalty, you had to like the physical nature showed by Grimes, he’s been impressive through the first week.

In the scrimmage setting to end the day, Ronald Jones opened it up with a touchdown scamper to the left side, and Cary Angeline added a pair of touchdown catches.

“As you saw today a lot of the focus was really on the tight red zone from the 10-yard- line and in both in 7-on-7 and the scrimmage-type setting there at the end,” Helton said. “That was our situational mastery today. We’ll come back and kind of see where we are in Practice 6, put the ball down and work full field zone and do a little bit of red zone with some live tackling, so it should be a lot of fun. I’m looking forward to seeing where we are now that we’ve got most of the installation in.”

There was also a lot of work done today on special teams, from punt team to kickoff return to gunners and field goals. In the ongoing field goal competition we saw Michael Brown hit 4-7 today (long of 42) and Chase McGrath was 2-4 (long of 43). Jake Olson took one snap.

Houston, we’ve got a hitter

Even though we haven’t seen a full contact practice in pads yet it’s pretty clear that John Houston is playing at a different level than we’ve seen from him before. John has waited for this opportunity after being limited during his freshman year due to a back injury, and spending his redshirt freshman season primarily on special teams. It was a long wait for a former 4-star player from Serra, especially while many of his former Serra teammates were seeing early success for the Trojans.

“Patience,” Houston said. “You have to do that sometimes at a place like USC, you just have to wait for your number to be called. Now that I’m out there I get to run around, show my sideline-to-sideline speed and go hit somebody. We haven’t really had a chance to do that yet but I’m looking forward to it tomorrow.”

“I commend John,” Helton said. “You know, he gets redshirted his freshman year – he really has that back issue. Last year he not only gets healthy, but he gets confident. If you remember, he was a huge factor for us on special teams. And now you look up, he’s a redshirt sophomore in his third year, and he’s really getting his chance to be a major contributor this year for us. I’m really proud for him, because he stayed the course. Not everybody does it happen your first year. Things happen. Maybe an injury. Maybe the light doesn’t come on for you. But I commend John in the fact that he just tried to get better each and every day, and you look up and he’s two years in, a redshirt-sophomore with three years to play here, and really in the right place. And he’s doing a nice job.

“One of the things that I think him and Jordan [Iosefa] bring to the table is that athleticism to be able to cover a slot into the boundary. We play so many three and four-wide out teams in this league, that athleticism to be able to walk out of the box at any time and to be able to wall a slot receiver off, as well as to play in space, is valuable in our league. You don’t see a lot of 21 personnel or true fullback teams other than Stanford. You see a lot of spread teams. That athleticism is important. We match personnel a bunch, putting Ajene [Harris] out to the field, but you’ve got to remember you’re still covering the slot and the boundary, and that’s where I think John’s advantage is.”

“Injury-wise today, Josh Falo got a lower body injury. We’ll see how it is. He’s going to get an MRI on his knee and see where it’s at. I don’t think it’s major, but we’re going to check it out. Wole [Oluwole Betiku] had kind of a turf toe that we held him out for after he complained about a little bit. And then James Toland got a groin today. We pulled him.”

“Remember, Ajene was the scout team quarterback for us last year heading into the ASU game, so he’s still pretty new to the defensive side, but he’s so natural and a hard worker. I wish we had 11 guys like him.” – Clancy Pendergast talking about Ajene Harris

“It really works two-fold. One, is the ability when you put on the headset, it gives you a peripheral view from a quarterback perspective to see the entire field from ground level rather than from a crane at a higher position. So, it gives him a realistic look at what he’s seeing. And when you put the headset on, you can move your head either way to be able to see what’s on that side, so it is true virtual reality. I also like it for the running backs and the linebackers. You saw in our 9-on-7 period being on the defensive side, so now it gives the linebacker his views to be able to read keys, especially in a two-back setting – to be able to read fullbacks, to be able to read hat placement of offensive linemen and give them some nice keys. So, it’s really helping us out two-fold to be honest with you – running backs, linebackers and quarterbacks.”

Does the fact that Cameron Smith won’t be available to play in the first half against Western Michigan affect how you’re preparing there?

“Yeah, that’s a good observation, because one of the things that ends up happening is that Jordan is double training both at the MIKE and the DIME position. We’re able to get Jordan the valuable reps to be able to help us – as well as Levi Jones. He’s kind of double training also. You’ve got four kids that are working, Primarily John is working at the DIME position [and] Cam is working at the MIKE, but you have Jordan and Levi right now double training at both, just in case we get an injury too. We don’t want to look up in a game and go, ‘oh gosh, we haven’t had guys that know that position.’ So, we’re double training them.”

Do you have depth concerns at any defensive positions?

“Probably the one we talked about right now, just the interior linebacker position – having those four guys. It’s one of the reasons that you see Boodah [Olajuwon Tucker] being moved back in there. You’ve got Grant Moore who is helping us out right there. But that position, and then right now, until we get [Matt] Lopes back, we’re really playing with five safeties back there, so we’re about two-and-a-half deep. We look forward to getting Matt Lopes back to make a true three-deep. Those two have good depth, but not great.”

Is there any separation happening in the battle at the wide receiver positions opposite Deontay Burnett?

“I see Pitt [Michael Pittman] and the experience that he gained, how valuable last year was for him to get some experience on the field. It’s showing out here. Tyler [Vaughns] is doing some nice things. He’s gotten a lot of reps both in the spring and here. He seems to be getting a lot more confident. And then Randal Grimes has shown flashes of really being a dynamic receiver. I really look forward to getting Joseph Lewis back, and kind of seeing how he does. I think he’ll be full speed tomorrow, so we’ll get to see him. And get Josh Imatorbhebhe back and let us see him full speed. But I think Pitt and Tyler are doing a nice job as of right now.”