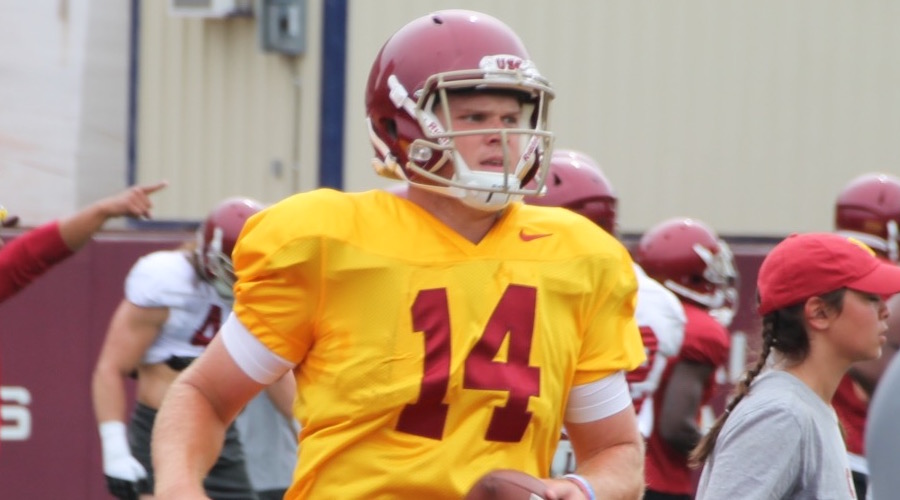 It was a warm Southern California afternoon for a lot of situational work for the Trojans, including a reminder of what can make Sam Darnold special with the weapons that he has around him.

“Last day of shells practice for us,” USC coach Clay Helton said. “We get to get into full-pads tomorrow, which will be great for our football team. We continued our situational mastery of being able to go yesterday third-down, today we installed our red zone packages both offensively and defensively, and I really thought the defense did a nice job winning three out of four situations.”

As for Darnold, he has put together two very good practices in a row following a Monday session where he threw three interceptions.

The first play that stood out to me today was a throw to Deontay Burnett from the 20-yard line. There was double coverage from Chris Hawkins and Isaiah Langley from the goal line to the back of the end zone, but Deontay kept on moving and eventually Sam saw an opening and fired the ball for a touchdown.

“The chemistry between Deontay Burnett and Sam Darnold was evident today,” Helton said. “I thought they were tremendous today. Now our challenge as coaches is to rise everybody else up to that production level and that chemistry. I saw some flashes today from Michael Pittman. He made some really nice plays in the red zone today – some tough catches. And that’s what the red zone is.”

On the very next play after the Burnett touchdown, Sam lofted a ball over the shoulder of Pittman for a 40-yard touchdown.

It was a play later in the day, however, that really made a splash. It was a low snap but Sam gathered the ball and began to scramble to his left, and he put some touch on it toward the goal line where Ronald Jones was racing down the sideline with John Houston draped all over him but somehow RoJo gathered the ball in for the score. It was a perfect example of Sam’s improvisation skills and the improved pass catching skills for Jones that Helton mentioned after practice on Tuesday.

“On a broken play on a little bit of a low snap Sam scrambles and finds RoJo matched up one-on-one with a linebacker, and he makes a tremendous catch,” Helton said. “And that’s one of the things as we talked about – him becoming a complete back, and hopefully being a guy that can touch the ball 20-25 times, not only running, but in those pass situations. He has shown it for the last two days. You know, he’s put a lot of investment into it.”

There was a bit of a scary moment after a Burnett catch when Deontay stayed on the ground for a few moments before getting up and returning to the sidelines.

“Yeah, he gave me about two or three heart attacks,” Helton said when asked about Burnett. “He was down there, but he just got the wind knocked out of him. He made a great catch and landed on the ball, and he needed a second just to catch his breath. Good to see him healthy”

During a drill on Brian Kennedy Field, Ronald Jones went off the left side for a touchdown on the second play of the drill. John Houston and Chris Hawkins stopped Jones for no gain. Darnold to Tyler Petite down the middle for a nice gain. There were two whistles in a row to stop the play before it started to get a player lined up right. Jack Sears had a run up the middle. Sears tried to hit Austin Applebee deep but C.J. Pollard came over to knock the ball away. Sears completed a pass to Randal Grimes for a nice gain. Walk-on running back Corbin Jountti had a long run down the right sideline.

There was a field goal session where both Michael Brown and Chase McGrath kicked the ball well, including both players making a kick from 47 yards. Chris Tilbey also showed off some big punts during a punt drill.

When the special teams drills were going on, the quarterback were on the other field throwing lofted passes from the 20-yard line into a net that was placed in the corner of the end zone.

During the final team period, Fink hit Grimes for a touchdown against coverage from Jamel Cook. Langley bats a ball away to prevent a completion. Darnold hit Tyler Vaughns on a slant that ended up in the end zone. Darnold threw for Applebee, the ball was tipped and Ykili Ross returned it for a touchdown. Ykili came right back with an interception of Fink. Houston had a hard tackle at the sideline where he hit the tight end and sent him several yards out of bounds. Houston had a tackle for loss on Aca’Cedric Ware.

After practice ended, Darnold and 7-8 receivers stayed on the field and worked on lofting balls to the back of the end zone from the 20-yards line.

In attendance were representatives from the Los Angeles Chargers, Lynn Swann and Max Nikias.

“I told him he channeled his inner Dez Bryant” – Sam Darnold said of the catch by noted Dallas Cowboys fan Ronald Jones.

Helton on breaking up camp monotony

“One of the things that you see that we’re doing I think that helps is bringing a different situation to the park each and every day. Like a true focus on third-downs, and studying that situation. And then today was red zone, from 30 to 10. Tomorrow we’ll go tight-red zone, from 10 to the goal line, plus two-point plays. So, by changing up those situations, it is something new to them, it is something fresh, and we’re able to teach them not only the X’s and O’s, and the schemes, but how you win ball games, and that is situational mastery.”

“I think one of the things that you’ve got to see is that body frame, and what you think it’s going to grow to be. In Daniel’s case, coming out of high school, I remember us having the conversation of, ‘man, the kid is about 217 pounds, but it looks like with his frame that he’s going to be about a 245-250-pound kid.’ And that’s what he’s growing into being. Same thing with Tyler. I remember Tyler being at 207 pounds his senior year, but we really felt he could be a 240-pound man. It’s a judgment that you have to look at. Narrow shoulders, how big a lower trunk they have, and that’s one of the parts of evaluation. It’s not where they are when you get them. It’s where they’re going to be two to three years down the line, and those two have been two really good developing kids.”

He’s got a hip-flexor right now. He tried to come out and do some things two days ago, and it just wasn’t ready. Obviously, he’s a great weapon for us. I don’t want it to turn into something where we look up and it’s a four to five-week thing. SO, we’re trying to trust in the doctors to trainers to get what he needs and then back him off if he starts hurting.

When you’re evaluating guys like Nico and Toa, who are playing both center and tackle, are there certain attributes you’re look at for center as opposed to tackle?

The first thing is to be able to function with the ball in your hand is the greatest attribute you have to have as a center, and both have done that very well. They’ve done a nice job with it. And then at the tackle position you look at the athleticism, especially in pass protection. Usually when you look at that tackle position you’re judging them on how they do on outside run plays, outside zone, because that’s when the ball gets outside of them. And then how are they in pass protection against those great defensive ends in our league that can get up field, and see their athleticism. We’re fortunate because both came in here having the ability to play tackle, and they were trained at center. They had not truly been centers until they came here and they were trained. They remind me of the Max Tuerks of the world that we’ve had – the ability to play tackle, guard or center at any time.

Helton on the attributes at tackle:

I think you hope for length, but there are times there are kids play the game at 6-3, 6-4 at tackle. I think that the kid that the Chargers got, Forrest Lamp, that’s not a 6-7 kid, but he was one of the better tackles in the country last year. It’s a lot to have to do with athleticism, especially in pass protection.

They’re doing a nice job. Vavae is showing a lot of discipline in his runs, especially with his reads. There hasn’t been any 40-yard explosive gains yet, but he has been a constant chain-mover, and when we go back and watch the film he’s doing everything right. Plus, he’s catching the ball out of the backfield extremely nice. Stephen has been kind of a home run hitter. He’s got to get some better ball security. It’s getting a little loose right now and we’re coaching that point up, but just like Vavae, he’s really becoming a weapon out of the backfield. You can see how natural he is. Tee and Tyson I know have already started using both of those kids, motioning them out, to create empty because they are valuable receivers.