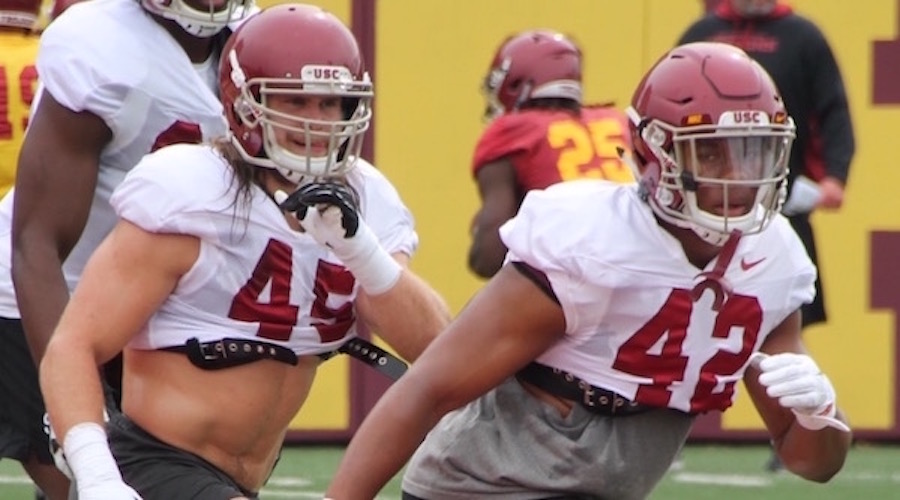 It was a shorts and shoulder pads workout today for the Trojans and the intensity was turned up a notch in anticipation of the full pads coming on this Friday.

“What we concentrated on today, which is a huge phase of the game for us and we were very good at last year, was our third-down packages,” Clay Helton said. “Our offense was No. 1 in our conference and 11th in the nation last year, and you saw the importance of it in continuing drives. Defensively, it’s one of the areas that we concentrate heavily on. You saw the pass rush that goes along with that. How Clancy [Pendergast] both will do four-man rush and blitz pressures, and it instituted it being 29th in the country last year. So, it’s a very important phase, knowing where the sticks are, and knowing down-and-distance. I thought the kids did a good job with it today.”

We saw some hitting early on with a team drill on Brian Kennedy Field. Stephen Carr had a strong run up the middle, and Dominic Davis got outside to the left with his speed. Sam Darnold swung a pass to Ronald Jones who had lots of room to run on the right side. The defensive line for the drill was 5-across with Nwosu, Green, Fatu, Dorton and Gustin. Jones went up the middle and took a hard pop from Marvell Tell. Jackie Jones did a nice job to track Tyler Petite and break away a pass along the sideline. Vavae made a nice cut at the line before Ajene came in to stop him. Matt Fink scrambled and lofted a ball up near the goal line, and Cary Angeline came down with it over Bubba Bolden. Marvell Tell had a pretty interception but as he caught the ball, Jalen Greene was falling to the ground and took a knee from Tell to his shoulder/head area. Jalen quickly shook it off and went to the sideline, and came back in later. Carr ended the drill with a weaving run for a nice gain.

“I thought the quarterbacks did a lot better job today, of finding the running backs in the passing game, and not just focusing on the receivers,” Helton said. “The one thing that we’ve got going, I can see RoJo [Ronald Jones] is very much improved coming out of the backfield. He made two nice catches today. And then I think the addition of Vavae [Malepeai] and Stephen Carr – they both have very natural ball skills. I think they’re going to be weapons coming out of the backfield.”

There was also a lot of special teams work including field goal reps, work on gunners in coverage, up front blocking and kickoff returns. At various points the wedge busters were Marlon Tuipulotu, Austin Jackson and Connor Murphy. Michael Brown hit 5-6 field goals (long of 44, miss of 41) and Chase McGrath hit 3-4 (long of 43). The KR options were Jackie Jones, Vavae Malepeai, Randal Grimes, Ajene Harris and Steven Mitchell. Wyatt Schmidt and Jack Sears were the holders for FG’s.

The team moved at the end of the day to Howard Jones Field for more situational work. Marvell Tell stepped in front of Trevon Sidney to break up a pass. C.J. Pollard had a pick against Fink. Grimes did a nice job to settle in an open spot over the middle for a completion. Tyler Vaughns caught a deep touchdown over Iman Marshall. A breakdown in the secondary left Austin Applebee wide open for a touchdown down the seam. Jay Godfrey had a pick of a Sears pass intended for Joseph Lewis. Greg Johnson broke up a pass for Vaughns. Tuipulotu batted down a Darnold pass at the line. Oluwole Betiku had a sack. Lewis caught a slant and turned upfield with good speed to elude the defensive back in pursuit. Brandon Pili stopped Sears at the line. Erik Krommenhoek caught a deep ball down the middle to end the day.

Among the guests in attendance were John Robinson, Delon Washington, Chimeze Metu, Darrell Rideaux and Will Poole.

“Pie Young got a right hamstring strain. We’ll see the significance of it. I’ll let you know tomorrow. And everything else was just light cramping and being pulled for hydration.”

“They aren’t even in pads and he looks like he’s in pads” – Darrell Rideaux talking about Marlon Tuipulotu.

When told that Cam Smith called him the fastest guy on the team, Jackie Jones said “I’m behind him on that statement”. Jones mentioned Velus Jones as competition for that spot, “he’s blazing”.

“We’ve got a lot of gym rats on this defense. Guys like Chris Hawkins, who is a consummate pro” – Clancy Pendergast

What have you seen from Clayton Johnston?

“He really came on in the spring and had a nice spring, and now he’s positioned there, and Toa [Lobendahn] is in with him, as well as Austin Jackson. But Clayton put on some good weight over from December to now – He’s put on about 20 pounds and he’s still kept his athleticism, and he feels comfortable on that left side, where Chuma feels really comfortable on the right. We’re giving him a good look, so he and Toa are going with the ones and kind of double training at that tackle position. When Toa is in at center, he’s going [at left tackle], and then when Toa comes out, he getting to play.”

Could any of the freshmen offensive linemen potentially break the top 5 and be in the starting lineup?

“We’ll see. We’ve got about basically 16 to 17 more practices before we release a two-deep, and I have been impressed right now with both Austin [Jackson] and Andrew [Vorhees}, both at the tackle positions, where they’re at for freshmen. And I’m sick that Alijah [Vera-Tucker] got the hamstring the other day because he was playing well. You could see him coming along, as well as Brett Neilon and Jalen [McKenzie]. But probably the two kids that are getting significant reps right now are Andrew and Austin, and they’re doing a nice job when they’re going with the twos.”

Is Vorhees also a guard?

“Our mindset coming into the last recruiting class was to be able to sign tackles, and when you look at Andrew, you look at Alijah, you look at Austin, and you look at Jalen – all of them played tackle in high school. But we saw that they would have the size to be able to move inside with great athleticism if we needed it. So, we over-signed at the tackle position knowing that we could move a couple guys inside, but we really wanted to gain that athleticism.”

What kind of versatility would that give your offensive line, if you have that athleticism at guard?

“One of the things that I think right now, when you look at a RoJo, when you look at the athleticism of this back, RoJo is a great outside zone runner, and it takes great athletes when you do run those outside perimeter zone plays whether it’s toss sweep or outside zone, so we’ll be having a lot of pulling in our schemes, a lot of things where guys have to be on the run, and so we’re looking for the 300-pound athletes. Right now, we have a good crop of them – a good, young crop of them”.

What, specifically, are seeing from Vorhees and Jackson?

“Usually when you come in, and you’re that young, they do a pretty good job in the run game, but what’s stood out to me thus far is their pass protection skills. To be matched up on a Wole [Betiku] or a Connor Murphy, and to be able to hold your own, not every time, but to be able to really compete with two guys that have been here for a year, that’s a good sign. I think both of them right now are sitting right at 300 pounds, so they put really good weight on from the time we signed them to now, and they still held their athleticism. But I’ve been really, really impressed with them in the pass game. All five of the freshmen are doing well in the run game, but those two guys have really stood out in our pass protection schemes.”