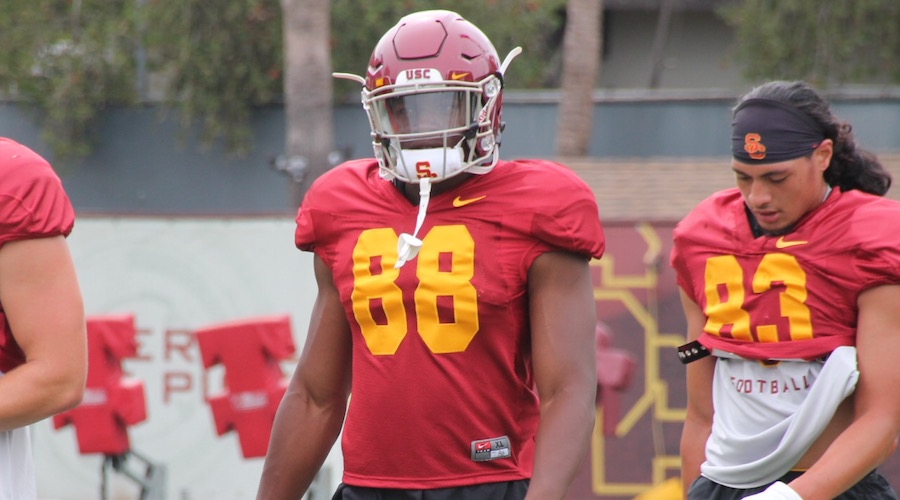 With the Trojans in shorts and helmets on Thursday, it was a lighter-than-usual practice with an emphasis on situational work as Clay Helton and his squad continue to build up for Saturday’s scrimmage in the Coliseum.

“Good Thursday practice,” Helton said. “Really focused today on end-of-game situations, some two-minute drives, and some special teams. Came out very healthy today, no injuries to report, which is always a good day. Really looking forward to getting back in the Coliseum on Saturday, and we’re really going to be focusing on some of our younger guys, our 2’s and 3’s, to see where they are at. We’ve got a pretty good feel right now for the older kids and what they’re capable of.”

Helton went on to note that live tackling will be a part of the scrimmage.

“We’ll have some live tackling,” Helton said. “We’ve had some good live tackling in this camp and you always hold your breath when you do it but I want to try and get one more in prior to working on our first opponent. It’s been a good physical camp and Saturday is the last day before we break.”

The team was notably up-beat throughout the two-and-a-half-hour session on Thursday, which featured a visit by a snow cone truck immediately afterwards, and there were still some notable highlight plays, particularly by the defense during an early 11-on-11 period. Both Ajene Harris and Iman Marshall came up with interceptions on passes thrown by Matt Fink. Harris, who leapt high in the air along the sideline to come up with his pick, took a number of reps with the No. 1 defense at the cornerback spot normally occupied by Jack Jones, with Ykili Ross sliding in at the nickel position in  those instances.

Offensively, it was another very solid day for Sam Darnold, especially during a 7-on-7 red zone period from the 10-yard-line. The talented passer put on a clinic at one point, finding Steven Mitchell Jr., Jalen Greene, Deontay Burnett and Tyler Petite for touchdowns. Fink also found quite a bit of success during that same period, hitting Joseph Lewis, Cary Angeline and Trevon Sidney for touchdowns.

In regard to the offensive line, it’s worth noting that for the third consecutive session the primary No. 1 group consisted of Toa Lobendahn at left tackle, Chris Brown at left goard, Nico Falah at center, Viane Talamaivao at right guard and Chuma Edoga at right tackle.

Perhaps the biggest positive that came out of the practice session, however, was the site of Daniel Imatorbhebhe showing signs of continued progress from his hip injury. The big tight end did not take part in any of the team periods, but he did take part in individuals, and for the second consecutive day Helton worked extensively with him one-on-one, throwing passes his way as he ran route after route.

“He’s getting a little more confidence,” Helton said. “He’s sticking his foot in the ground, his speed is increasing by the day. He’s really close. He’s such a valuable member of our offense, such a weapon, that we just want to make absolutely sure that he’s 100%, we don’t want to rush this thing over the last two days. We just wanted to see him move, functional football movements and see where he’s at. He looks good, I’m hoping to start integrating him back probably next week.”

Helton on Josh Imatorbhebhe, who made a number of grabs during a late 11-on-11 two-minute period.

“He’s doing a great job for two years now just making the most of his opportunity. He’s one of those guys who is a self-made man, a student of the game, really works his craft. He really did a good job this off-season of developing his core strength. He’s had some back issues, and one of the things I’ve seen is not only has he been living in the weight room but he’s also been living in the rehab center.”