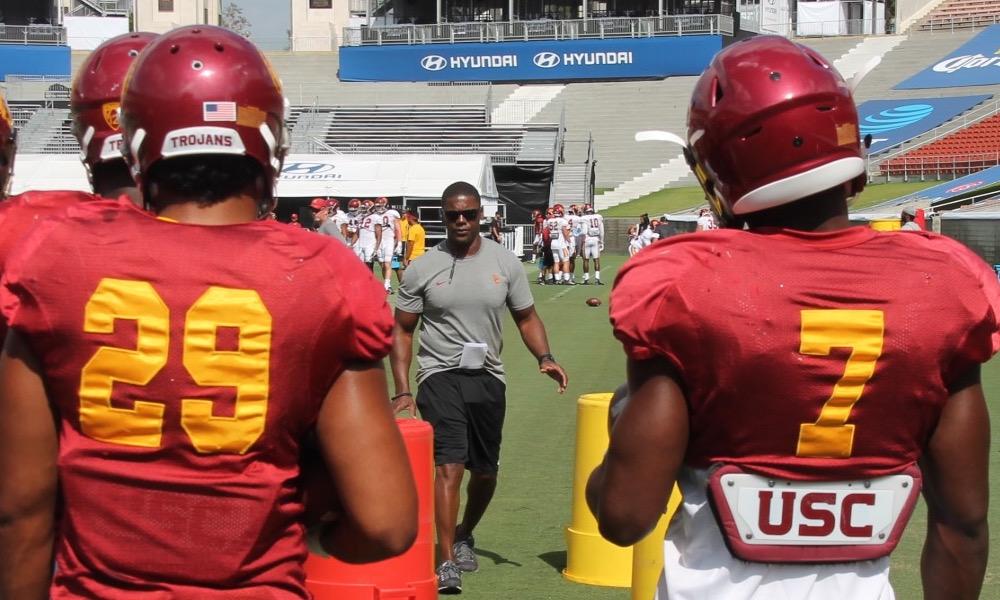 It was a Coliseum visit for the Trojans on Tuesday with a full pads practice that featured some live contact, and a field goal period that saw the placekickers make 8-9 attempts.

“A really good Tuesday practice,” USC head coach Clay Helton said. “Great to be back in the Coliseum. I thought it was a really good, competitive, physical practice. Really worked some 3rd-and-short situations and some in-game situations, some four-minute situations where the defense must get the ball back [and] the offense is trying to finish the game out. Overall, I loved their competitiveness and what they brought to the table today.”

There was an injury scare when Michael Pittman went down awkwardly after landing his left foot on Jackie Jones arm after a pass attempt and he had to be taken by a cart up the tunnel, but Clay Helton said the X-ray was negative on his ankle.

“Injury-wise, Brandon Pili had a small elbow injury, he should be fine,” Helton said. “Cole Smith, we’re going to look at knee soreness. Andrew Vorhees we held with a little bit of a sore back. Michael Pittman, obviously you saw had an ankle injury. We’ve gotten the X-Rays back, they were negative, so it looks like a high ankle sprain. That’s good news there.”

The first big play for the offense came when Sam Darnold hit a wide open Cary Angeline down the seam for a touchdown. Sam also hit Steven Mitchell with an out route, Steven had a nice day today. Sam with a swing pass to RoJo, and then Sam threw a high ball over the middle that Deontay Burnett caught with a very nice one-handed grab. Darnold hit Carr with a screen pass. Fink to Josh Imatorbhebhe who made a nice catch going out of bounds. Fink threw in the flat, Jamel Cook jumped the route and got his hands on the ball but Tyler Vaughns wrestled it away and went for extra yardage. Fink with a slant to Joseph Lewis.

For the defense. Chris Hawkins had a TFL on RoJo. Ykili Ross had a pass break-up on Velus Jones. Matt Fink threw a pass that bounced through the hands of Tyler Vaughns, then through the hands of Jamel Cook, before falling to the ground. Matt Lopes had a sack, and followed that up with a solid pop on Carr after an 8-yard run up the middle.

When the 2nd unit offensive line came out for the first series it featured Austin Jackson at LT and Clayton Johnston at RT (the normal 2ndRT, Andrew Vorhees, was held out). The 3rd OL had Jalen McKenzie at RT, he had been lining up primarily at guard to this point.

“The kicking was better today,” Helton said. “I commend those two kids. They came in here with the right attitude, they were challenged and they really came with a great mindset, and a competitive mindset. Obviously, today I thought they showed a lot of confidence in being in this environment. I look forward to that continuing.”

There was a pretty competitive WR/DB session held in the red zone, particularly with some good battles between Tyler Vaughns and Jamel Cook. Randal Grimes and Josh Imatorbhebhe both had good over-the-shoulder catches in the end zone. Jackie Jones had a pass batted away.

Daniel Imatorbhebhe was dressed and went through the individual periods but did not take part in the team periods.

“Matt Fink deserves the extra reps he’s been getting and today was another solid day for him, I hope I can see the same from him in the mock game on Saturday” – Clay Helton

Do you feel like there is a consistent deep threat on offense right now?

Just from seeing what has happened early in camp, we’ve seen Tyler Vaughns make plays deep. Obviously, Pitt [Michael Pittman] had been making plays deep before the injury. The other guy that seems to be a big-play guy for us is Velus [Jones] on the inside slot right now. Deontay has been very consistent. He has not gotten a lot of deep-ball chances, but just has moved the chains at will. And I’ll tell you what, Josh Imatorbhebhe showed me some stuff one-on-one today to be able to be a big, physical receiver. The two young kids, Joseph [Lewis] and Randal [Grimes], have the capability, [they] just need more reps at it. But I think we’re going to have some speed and things that we can do on the outside. Just thank goodness for 15 more practices.

Will you continue to double-train Toa Lobendahn and Nico Falah at center and tackle, or are you settled there?

On Lobendahn’s abilities at left tackle.

One, he’s done it before. He’s played the position. Plus, you see his athleticism. He’s really able to play all three positions. I’ve said it before, he reminds me of Max Tuerk, a guy that could play left tackle, guard or center at any time. He’s such a valuable commodity because of it – and Nico as well. To be able to have guys that can play different positions is invaluable and makes them very valuable to our team, but very valuable for themselves in the future also.