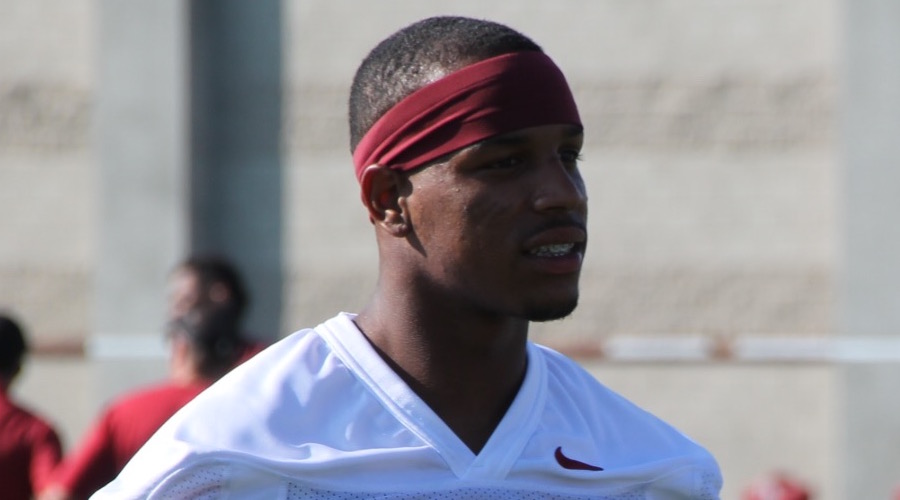 It was a defensive day on Day 2 of USC fall camp practice as the Trojan defense forced four turnovers and batted down three passes on the day.

This isn’t an unexpected development as defenses are usually ahead of the offenses early in camp, and this is a veteran unit for Clancy Pendergast with plenty of familiar faces. Cameron Smith and Chris Hawkins, two of the leaders of the defense, each had interceptions off Sam Darnold

“Day 2 in the books, and typical of early in practice the defense really stood out,” USC head coach Clay Helton said. “We put another day of installation on the offense, and I thought the defense took a great step forward. You know, we talked about it in our team meeting how important turnovers are, and you look up and they get four turnovers on the day, which is tremendous. And the defensive line with three batted balls, which is something we work extremely hard on in individuals.”

The fact that it was Darnold throwing three picks is notable, although both Clay Helton and his brother Tyson (the USC quarterback coach) were quick to temper any concerns with the reality that this happens sometimes in a fall camp practice with a group of young receivers.

“There’s going to be some growing pains as we go through this camp,” Clay Helton said. “You have new wide receivers, you’re learning their timing. I don’t get overly emotional about it – that it’s the end of the world in Practice 2.”

“First of all, great job by the defense,” Tyson Helton said. “We don’t have to say much to Sam, he knows. Great day for the defense, very average day for us as a group. We’ve got a lot of new guys around Sam and we need to get to that point where he knows where all those guys will be, and that timing isn’t there yet.”

USC offensive coordinator Tee Martin said he thought one of the interceptions was a bad ball, the other two were just good plays by the defense. For Smith, his pick came early in the final team period when he read the route, made the catch and then sprinted toward the end zone untouched while even doing a little high-step along the way. Hawkins got his after Sam tried to hit Deontay Burnett down the seam but Deontay bobbled the ball and it ended up in the hands of Hawkins.

With Sam being Sam, of course, he came back with two of the better touch throws you will see. The first one was a teardrop deep throw that came down over the shoulder and into the hands of Jalen Greene despite terrific coverage from Iman Marshall. The next one was to Michael Pittman, who was running down the right sideline but Marshall was directly between Sam and his line of sight to Pittman, so Sam put just enough arc on the ball to miss Biggie’s outstretched fingertips for the completion.

Ajene Harris had a pass break-up on a deep ball at the goal line….Matt Fink hit Jalen Greene for a touchdown….Jack Sears completed a ball over the middle to Erik Krommenhoek…..Tyler Vaughns caught a slant from Darnold by extending his long arms….Sears took the snap and scrambled before hitting Josh Imatorbhebhe…Fink to Randall Grimes along the sideline for a long gain….Darnold swung a pass in the flat to Stephen Carr, who has impressed teammates and coaches with his pass catching ability….Fink threw a pass to Pie Young that fluttered and one defensive player yelled from the sideline “that was a duck”….Jay Tufele had a sack on Fink

* Good to see Nathan Smith dressed in practice, even if he isn’t doing anything as he rehabs from his knee injury

* Clay Helton spending a lot of time bouncing back and forth between drills. Sometimes he is just watching, as he did with the OLB’s, and with the DL he was the QB in a pass rush bag drill.

* Kenny Bigelow spent a lot of time working with Jay Tufele during a one-on-one drill, and gave him a pat on the helmet after the drill was done.

* Helton commented on a few of the 2nd year players who have made an impact so far on the defense. John Houston and Jordan Iosefa are fighting it out for the WLB spot and Helton said the pair have put together back-to-back solid days. He also praised Oluwole Betiku and Connor Murphy.

* Today was the first opportunity for extended field goal work with Michael Brown and incoming freshman walk-on Chase McGrath getting their opportunities to split reps. Jake Olson got a chance to take a few snaps and Helton reiterated that “we’re preparing for a chance to get him out there”.

“Injury-wise today, had Viane [Talamaivao] with just a roll of an ankle a little bit. We were precautionary and pulled him for the day. Alijah Vera-Tucker had a tweak of a hamstring, and Daniel [Imatorbhebhe] we’re being very protective of that hip-flexor. He’s just getting the work that he needs and then we’re shutting him down and being very precautionary there.”

On Ronald Jones “I love what I saw at the end of the year, I saw it in the spring, is him being a complete back – and every-down back. And I really have been impressed with him through the spring and the fall. You know, we’ve always known him as a runner, now he’s catching the ball out of the backfield, pass protection, you see the weight he’s put on. He came into camp at 207 pounds. He’s added 10 pounds of muscle on. He’s forming himself into that every-down back, and that’s what you want when you have an opportunity to be in that role.”

Jones growing into leadership role “When he was growing up you had a guy here names Justin Davis who was pretty good too, and now it’s his turn. He’s the older brother and he’s got some guys who are pushing him too. I’ve been impressed with Ced [Aca’Cedric Ware], Dominic [Davis], obviously you look up and you have Vavae [Malepeai] coming on board after a redshirt year, and then Stephen Carr who’s really put on a show here in our team run. So, he’s got a great opportunity to be pushed from behind. We have to find that second and third guy going into that first game, but the good thing is the strength-in-numbers at that position, and its quality. That’s what you want.”

On Jones sporting dreadlocks again these days “He told me dreads make him faster, I said I like it. I wish I had some. RoJo is a special spirit and a special person, so if it makes him feel good I’m all for it.

On how he views a feature back “Obviously in this balanced offense that we have, and we talked about it in our team meeting, how the run sets up the pass. We have to be a bunch that hopefully we do like last year – we averaged 200.7 yards rushing a game last year. And that balance helps create one-high coverage and throws down the field. A perfect game for me is 80 snaps with 40 runs and 40 passes, and keeping the defense off balance. Obviously, you’re going to need a guy that hopefully can do 25 touches in a game, and then have one or two other guys that can carry the rest of that load. And then you have some guys that are special coming out of the backfield. You’ve seen Dominic Davis for us motion out and do some things. You’ve seen Velus Jones in this camp do some of that. We try to be creative. That is the fifth receiver on this team, and that position has created explosive plays for us.”

Size of freshmen linemen “You know, I look at those big kids, and you sign them and it’s amazing how much six months help. I look at [Brandon] Pili and he’s at 340. And you look at Jay Tufele, he’s at 307 right now. You look at Austin [Jackson], and he’s put about 15 pounds of extra weight on. They’re still growing. All of a sudden they were 17 or 18 years old, you give them six months and now they’re really big people. Andrew Vorhees was another one that jumped up. Alijah Vera-Tucker. So, it’s good to see those kids grow. We really felt that those 10 kids that we signed were going to be really big people at the end of the day, and you can see right now, as true freshmen, they’re already grown men”.

On Darnold’s three interceptions “It’s good for him. Obviously, you want it to happen now, and to learn from that. There’s going to be some growing pains as we go through this camp. You have new wide receivers, you’re learning their timing. I don’t get overly emotional about it – that it’s the end of the world in Practice 2. I think it’s a great learning example for him to really be able to dive in and get a great chemistry with these kids. And like I told him, the one thing that he has is his sense of timing in letting the ball go. You never want to handcuff that guy. He’s got great anticipatory skills. If he sees it and believes in it, let it go. Make a full speed decision. We’ll live with the results. I trust him to do the job.

“I’m going to say this, there is no man on this field that puts more pressure on himself to perform than Sam Darnold. And he doesn’t really do it because of guys behind him. He does it because he wants to help his teammates, and he loves for that pressure to be put on him to carry his team. You appreciate that as a coach. I’m more about making sure he gets to the next play, and don’t worry about it and learn from it. He’s a very mature soul, and he’s one that learns from every mistake. I would expect that he comes out here in the next practice and does extremely well.

Sam reaction to those interceptions “He just came over and we said, hey, it’s that kind of day. It’s a great learning day. It shows you how much extra you have to do with these kids and be able to get on their page. And it’s one of those things where when things aren’t going good, remember to check the ball down a little bit. Or, you’ve got great feet, take off and run. As much as success helps you, also some failures help you to learn from too.”