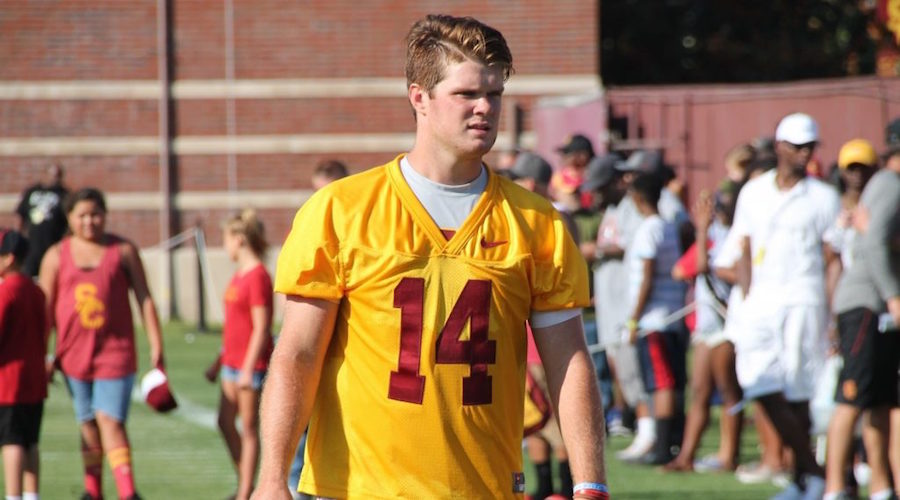 The Trojans returned to Brian Kennedy-Howard Jones Field on Saturday with a full squad and lots of hope for the 2017 season.

That full squad element was the first thing that Clay Helton talked about in his post-practice press conference, and for good reason because it’s been a while since we’ve seen such quality depth up and down the field.

“Just to feel the numbers out here, Helton said “One, it means you’re incredibly healthy, but, two, where I felt it especially, was with the big men – with the offensive line, and especially with the interior defensive linemen. Those were the guys that really jumped out – Marlon [Tuipulotu] and [Brandon] Pili and Jay Tufele and Jake Lichtenstein. You saw those big bodies inside and all of a sudden it went from dwindling numbers to, ‘wow, we’re three, almost four–deep in there right now.”

The overall size of the defensive line is also something that jumped out to me. The media was put in a different spot on the field today from where we normally are and it allowed us a tremendous close up view of the d-line group going through their work. Rasheem Green jumps out with his size, it is great to see Kenny Bigelow going through drills, and the freshmen such as Marlon Tuipulotu, Jay Tufele and Brandon Pili all pass the “big” eyeball test.

The next noticeable part of the day was how it seemed like a mid-camp practice with the pace of play and the lack of penalties or stoppage to explain what was going on. Helton has talked often about how important staff continuity was to only lose one assistant coach from last season, and today that certainly showed with how crisp the practice was.

“We played fast today,” senior safety Chris Hawkins said. “Our first unit on defense has a lot of veteran guys and it showed. We’ve basically got a quarterback on each level of the defense with Uchenna up front, Cameron in the middle and then I’m in the secondary”.

Helton also made a point to note how the freshman came in ready to work, and without a lot of talk. There was also a lot of teaching going on between plays or drills, as older guys continue to pass along the Trojan way of doing things to the freshmen. There aren’t too many signs that indicate a program with a good foundation than seeing guys work with players who could end up taking their spot.

“I was impressed with our freshmen,” Helton said. “They’ve had a terrific summer, but they just came out and they kind of shut up and just worked. And they came out here with a humble attitude, an attitude where they want to show what they can do. I was really impressed by them. And one thing that I really liked that I saw today, you saw the older guys really teaching the younger kids, and that depth and those numbers, guess what it does to your vets? It really takes reps off them, but they have to be mentally engaged, and also almost become coaches on the field training young guys, and that’s what you saw. I saw J.G. (Jalen Greene) out there coaching up a young outside wide receivers, and you saw those tight ends – I saw Tyler [Petite] and Daniel [Imatorbhebhe] just living with Josh Falo and Erik Krommenhoek. That’s what you want. You want your older guys to really coach up those young guys when they’re not in.”

During an early team drill we saw Daniel Imatorbhebhe take a short pass along the sideline and turn it upfield for a long gain. There has been some concern about Daniel as he recovers from a shoulder issue that limited him in spring and summer so it was nice to see a play like that early on.

There was a lot of mixing and matching along the offensive line. Toa Lobendahn and Clayton Johnston both got time at LT, Chris Brown and Roy Hemsley were at left guard, Nico Falah and Toa were at center, Viane Talamaivao and Jordan Austin were at right guard, and Chuma Edoga and Andrew Vorhees saw time at RT.

The action really heated up in the final team period of the day where there was a lot of mid-range and deep throwing:

Matt Fink got things going by hitting Deontay Burnett with a quick pass and he had a nice run after catch….Joseph Lewis had a dropped pass but came back two plays later and went over Jamel Cook (not easy to do) to grab a deep ball at the goal line from Sam…..Steven Mitchell settled in nicely over the middle for a 15 yard gain…..Tyler Vaughns reached out across the middle and it was a pretty catch…..Sam hit Josh Imatorbhebhe on back-to-back plays, the second one was a very nice slant….Iman Marshall had a pass break-up against Jalen Greene…..Michael Pittman caught a pass from Fink…..Jackie Jones had a pair of good plays, first was a PBU on a pass intended for Vaughns, and then Jackie had a pick at the goal line…..Burnett broke up a ball that Ajene Harris was about to intercept, Sears hit Erik Krommenhoek down the middle and then Fink hit Randal Grimes for a touchdown against coverage from Greg Johnson.

“You saw Matt Lopes out. He’s got a toe dislocation. We’ll probably keep him out about a week. Frank Martin just has a little tweak of the hamstring that came up. He’s day-to-day. The two surgeries that happened in the offseason with Nathan Smith, ACL, and Tayler Katoa, ACL, obviously they’re out, but they’re progressing nicely with getting that rehabbed. And Jonathan Lockett, right now it looks like he’s going to have to have a hip surgery that will hang him out for an extended period.

“We all missed being out here. It might be weird starting in July but the quicker I could get a football in my hands the better.” – Sam Darnold

“Another thing that was evident to me was just the development of the freshmen from last year. To see a Wole [Oluwole Betiku], a Connor [Murphy] and a Jordan Iosefa, a Vavae Malepeai, a Matt Fink…those types of guys, you could just see how they’ve developed, and they’re really in a place where they can contribute for us.”

“Yeah, we’re double training right now with Nico and Toa. We have two young centers behind them in Cole Smith and Brett Neilon. We’re really double training both Nico [Falah] and Toa at that center position, but also at tackle. You saw them go in and out – Nico going from center to right tackle, and Toa going from center to left tackle. I think it’s going to be imperative to train those two guys at that center position. Both are really healthy, they looked good today. We’ll keep double training them. Those two guys have been rocks for us, and they’re going to need to work at both positions.”

“I think they’re very motivated. They got a taste of confidence last season, a lot of momentum, they know what they want. We’re not a satisfied bunch. We’re not a comfortable bunch right now. We may have accomplished things last year, but we didn’t win a Pac-12 championship, and that’s got to be our goal – to be able to get to that Pac-12 championship game, and try to win that. That opens up even more doors. But we’ve got a lot of work to do, to be able to get that done. I loved their approach today. That usually happens on Day 1. Now the challenge is to keep that for 28 more practices prior to Western Michigan.”

“I’ll tell you what, I love the aura of that quiet humbleness. You know, it kind of resonates when your top guys are like that – a Sam Darnold, a Deontay Burnett – that just worry about executing their job and preparation, it filters through the rest of the team, and I kind of felt it today. I didn’t see a lot of trash talking today. Even though it’s Day 1 and there’s excitement. Just a really mature group. And he’s so focused on his job. He’s not the biggest guy. He’s not the fastest guy, but I don’t know of anybody that may produce more than Deontay.”