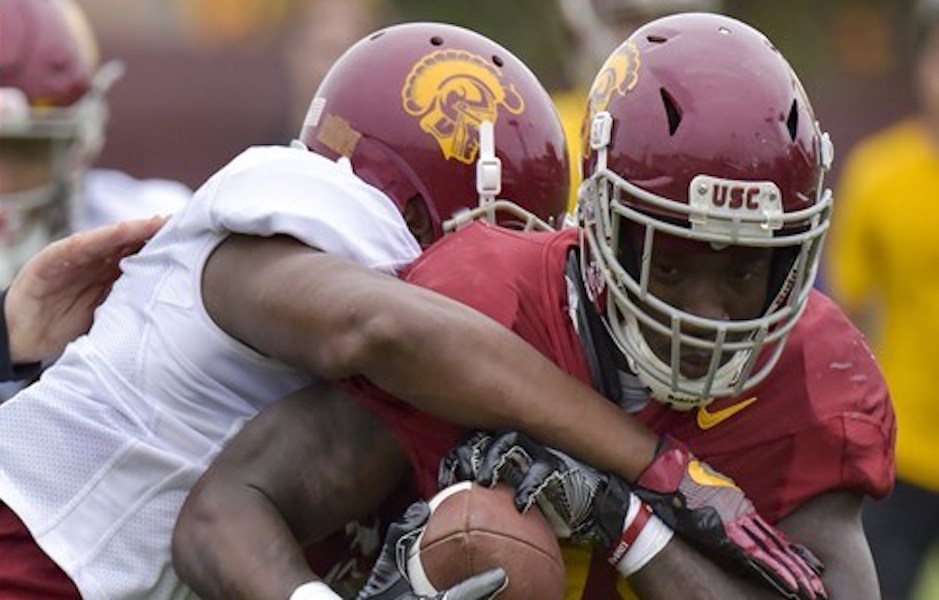 It was the first day in full pads for the Trojans with the rainy weather moving practice from Brian Kennedy Field to Cromwell Field.

“Today was a good chance to get in the rain, work on some fundamentals in the rain, and I look forward to another full pad practice tomorrow where we’ll have a little more situational work and taking guys to the ground with some live tackling. I’m really looking forward to seeing how the quarterbacks function in those live situations,” USC coach Clay Helton said.

Among the highlights from the limited team situations were: Bubba Bolden had an interception after C.J. Pollard tipped a Matt Fink pass that had been overthrown to Michael Pittman. Talanoa Hufanga had a pick of Holden Thomas. Josh Falo had a nice deep reception. Christian Rector had one sack on Fink while Tufele and Mauga combined on another.

One guy who has really stood out to me so far is Caleb Tremblay and Helton commented on him after the practice, “His effort to the ball, the ability to get off the ball, he uses his hands to get to the offensive player as fast as possible. His head is spinning right now with the playbook but it’s only the fifth practice, when the light comes on and there’s no confusion he’s going to be a very good player.

JT Daniels was in attendance.

Helton said there were 10 guys who got evaluations from the NFL. 4 left and he mentioned Cam Smith, Porter Gustin, Marvell Tell and Chuma Edoga among those who came back. No definitive word on the other two but you could imagine Iman Marshall and Toa Lobendahn as two of the candidates.

Johnny Nansen had successful knee replacement surgery today and will miss the rest of spring. Nansen is hoping to be back around the team in a week or so but Joe DeForest has been hired as a defensive analyst and will take over his role for the remainder of spring. The hiring of DeForest had been reported recently but it was thought to possibly be as a special teams assistant. Instead, he will be on defense while Andy LaRussa was announced as the special teams assistant, and Lenny Vandermade is back as an offensive analyst with the o-line.

The analyst roles are quality control positions, they have the ability to prepare meetings for coaches, to do breakdowns and cut-ups and get us ready for the next game. It’s good to have guys in those roles with experience in the coaching field, guys who can get the terminology and the language down that each coordinator needs.

Helton was a GA at Duke when DeForest was on staff.

“We usually have two GA’s, two quality control assistants on each side of the ball and one on special teams. We stay somewhere between 25-30 in terms of coaches, assistants and GA’s, a good number, nothing too extravagant.”

I thought it was tremendous to go out there in that situation, with all 32 teams, you had owners, GM’s, head coaches, and you throw a little rain in there for good measure, it was great to see his demeanor, it was like he was throwing in the 2nd grade. You couldn’t have scripted it any better with how it turned out.