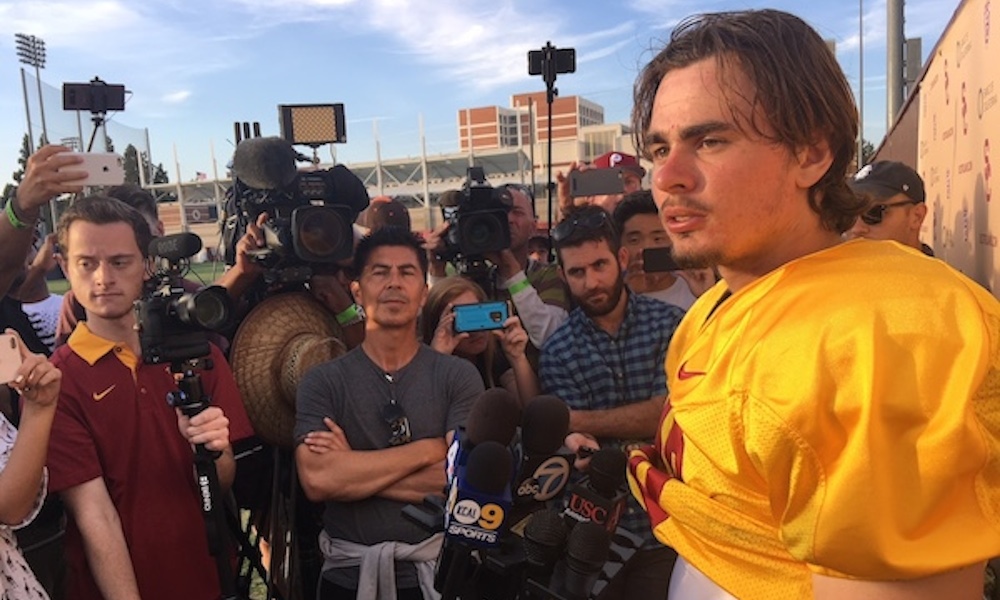 All in all it was a good day on Brian Kennedy-Howard Jones Field as it’s game week, the Trojans were in full pads, and the new starting QB was on display, including meeting with the USC media for the first time.

“It hasn’t been that overwhelming,” Daniels said on being named the starter. “I’ve been focused on learning the playbook and being the best player I can be for the team. At first it was new but after the first couple days I had a chance to feel a little more comfortable, talk with coach Helton, coach Tee and coach Ellis, and things started to slow down a little bit.”

The starting center who will be working with Daniels, Toa Lobendahn, did not practice today due to a pec strain so Brett Neilon took the majority of reps in his place.

We saw some movement in the secondary today consistent with the depth chart and that was Greg Johnson taking the majority of first team reps ahead of Isaiah Langley. Iman Marshall has been flipped to the opposite side of the field, to the spot vacated by Jackie Jones, while Johnson has stayed at the spot where he worked all spring and fall. Marshall had a nice pick in a one-on-one WR/DB drill where he turned around in time for a ball intended for Randal Grimes and was able to make the play.

Helton on JT Daniels “In that first scrimmage he had a couple moments of, wow, he looks extremely comfortable. I loved the maturity he showed after I told him the job was his, he was exited but then he quickly said he understood there was a job to do.”

Porter Gustin update: Porter went through practice with a sleeve on his knee, and seemed to be moving very well. Helton said Porter has yet to be cleared by the doctors for the game but added “I feel pretty confident. We’ll see how it feels for him tomorrow, how it reacts after a good day of contact today.”

Other injuries: Palaie Gaoteote and Liam Jimmons have been ruled out for the game. Toa was held out of practice with a pec strain. Markese Stepp is in concussion protocol. Josh Imatorbhebhe (ankle) was out and Daniel Imatorbhebhe (quad) was limited but did take part in an early run drill that featured contact. Jordan Austin left practice early with a pec strain and Josh Falo left early with a tight hamstring.

Roster moves: DB’s Ykili Ross and Jay Godfrey will transfer and are no longer on the roster. Ross will finish up his degree at USC in December in order to be a grad transfer.

Bryan Ellis on Daniels “He’s going to get more reps in practice this week and then we’re going to go out and play a game on Saturday. I want him to be smart. It will be different than what he’s seen before but we’ll be there with him and eventually it will just be football. His mind is so far advanced for any 18-year old I’ve ever seen, I can’t wait to watch him play.”